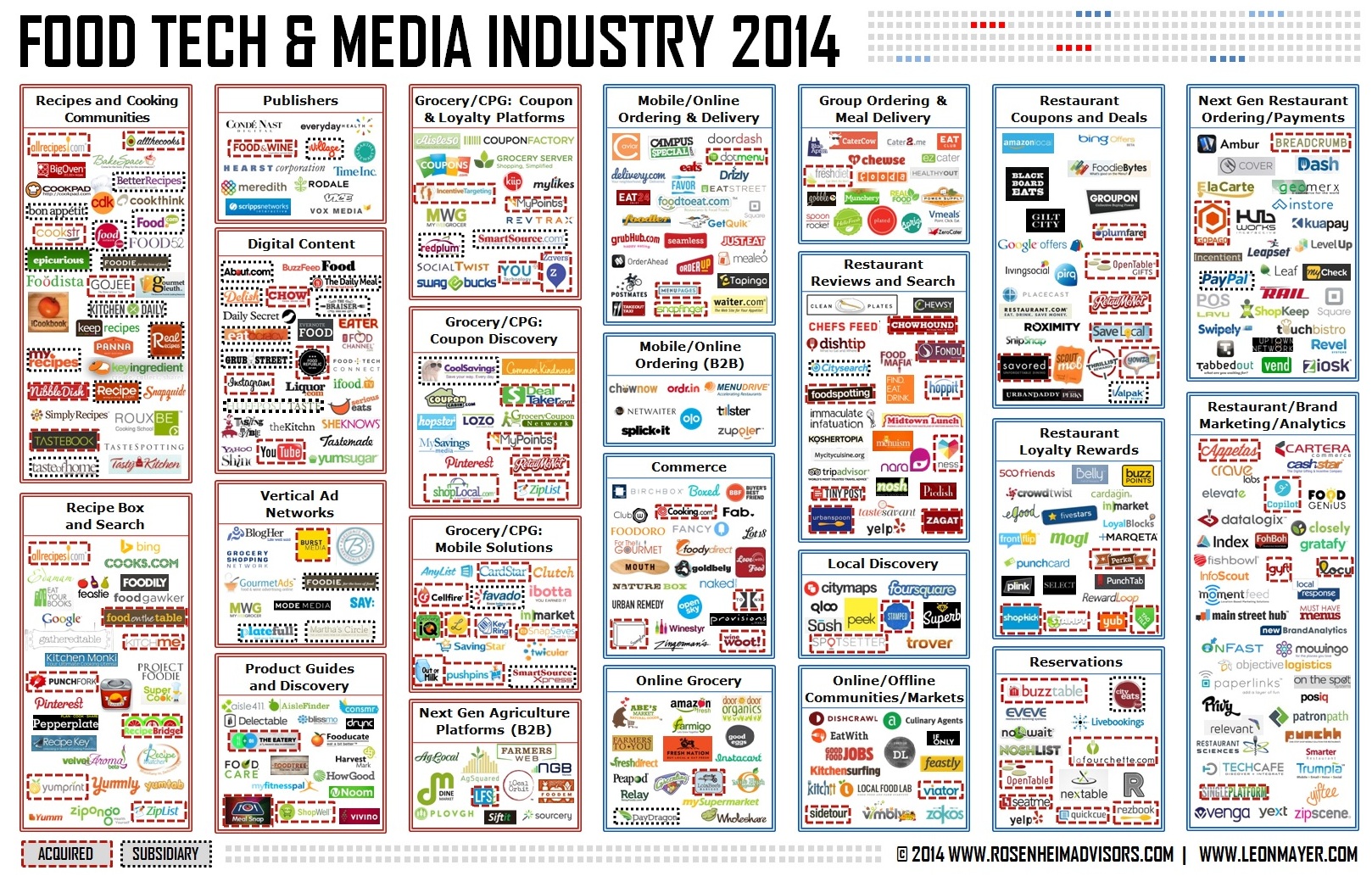 Over $800m poured into the food tech ecosystem in September ($517m in eleven equity fundings, and $300m via two acquisitions, with four acquisitions of undisclosed size). As with recent months, there has been a steady increase of later-stage rounds, with close to half of the deals series B or above. The industry has begun to shift, with institutional investors participating more frequently, in larger and later-stage rounds, due to the strongest companies beginning to move beyond simply establishing a scalable model, and pushing further towards expansion and growth.

A noticeable theme, in both the deal activity as well as headlines over the past month, has been centered around the digital grocery experience. From digital coupons and deals, to loyalty and mobile rewards through beacons, to new ordering and delivery formats, there has been a surge in innovation and partnerships aimed at transforming (and further monetizing) the grocery consumer’s experience. Even the USPS has gotten in the game by partnering with AmazonFresh, launching a two-year market test of what it calls “Customized Delivery” to deliver groceries between 3 a.m. and 7 a.m in San Francisco. Over the years, many companies attempting to digitize the weekly grocery ritual have come and gone, however as we have seen in wider tech sector, timing is everything. And perhaps the time is now.

SK planet (SK Telecom) Acquires Shopkick. The Redwood City, CA beacon-based loyalty app gives users points, or kicks, for entering a store or scanning a barcode while using the app. The app has 8 million active users along with deals with 20 retailers and 200 brands, including a number of CPG brands such as Procter & Gamble, Mondelez, Unilever, and Pepsi. SK Telecom (South Korea’s largest mobile carrier), and its subsidiary SK planet (a multinational mobile platform and shopper rewards program) will use the acquisition to capture a larger piece of the growing U.S. mobile commerce and location-based shopping market.

Zomato Acquires Gastronauci. In its fourth acquisition in three months, Zomato continued to expand its foothold in the multilingual European market with the acquisition of the Poland-based restaurant discovery website and mobile app, which helps users look for places to dine out or order in from a database of over 26,000 restaurants across Poland. Zomato has been aggressively expanding its global presence through acquisitions over the past two quarters, as the company stated it prefers to “acquire and partner with a dominant local player” rather than competing with them. Zomato and Gastronauci will work on rolling out an integrated product in the coming months.

Just Eat Creates Joint Venture to Merge its Brazil operations with iFood. Just Eat, a publically traded UK-based online food ordering company, said that it would transfer 100% of the shares of Just Eat Brazil Servicos Online, which trades as RestauranteWeb, to iFood (owned by the mobile company Movile in São Paulo). Just Eat will also provide $5.7 million to help finance the joint venture, which will operate under the iFood brand. After the transaction, Movile will own 50% of the joint venture, Just Eat will own 25%, and iFood’s original founders will own the remaining portion. According to the release, the value of the gross assets of RestauranteWeb as at 30 June 2014 was $2.1m.

Catalina Acquires Cellfire. The San Jose, CA-based provider of load-to-card digital coupons will expand Catalina’s brand offerings and help build out its mobile loyalty programs. Cellfire is a website and mobile app that helps companies deliver CPG coupons and other offers to consumers, automatically loading customers’ loyalty savings cards, while driving and measuring in-store purchases. With the acquisition, Catalina expects to have the largest pool of load-to-card content, or coupons that are stored to loyalty cards. “For Catalina, it’s an omni-channel offering that brings value to retailers, brands and consumers,” Todd Morris, president of Catalina’s U.S. business, told Progressive Grocer. “It’s a robust solution at scale that meets where the consumer is going, is a mobile and online solution for retailers, and gives CPGs the ability to reach the mobile shopper.” Cellfire will operate under the Catalina umbrella, retaining its name, all full-time employees and its Silicon Valley headquarters.

Inmar Acquires Millennium Process Coupon. The New Brunswick, Canada-based coupon clearing and redemption firm will position Inmar to “extend its digital and traditional coupon, data analytics and shopper engagement solutions to MPC’s promotion clients and the Canadian marketplace.” The acquisition brings together two firms that are leaders in retail technology. According to its website, Millennium is involved in the redemption of about $100 million of coupons annually and has processed more than 65 million coupons, as well as handling high volumes of rebates. It’s responsible for handling 80% of all coupon redemptions in Canada.

Food52 Raises $6m. The New York-based crowd-sourced cooking site plans to use the funds to expand operations and hires. According to AlleyWatch, the team plans to focus efforts on a new mobile experience for Food52 users, increased video and home-related content, and more events, and according to Crain’s even branching out into new areas of coverage, like design and travel. Currently two-thirds of Food52’s revenue comes from e-commerce sales, and the other third from advertising.

Favor Raises $2m. The Austin-based on-demand food delivery app allows users to get products delivered from local stores or restaurants. According to the company, proprietary algorithms forecast supply and demand, prevent delivery errors and dispatch deliveries to the best available assistant, taking into account variables such as food preparation time and different types of deliveries. The company intends to use the funds to continue to expand nationwide.

FiveStars Raises $26m. The San Francisco-based loyalty company provides an app for users to gain rewards from their favorite restaurants, while also providing a platform for those businesses to track their customers’ behavior and learn about their clientele. The company intends to use the funds to expand its team and add new features to its platform. According to the CEO, the raise was “less that we needed to raise a lot of cash and more that we were able to.” In terms of growth and new features he further explains to TechCrunch, “There’s a lot we have earmarked for expansion so that we can build a critical mass network so you can be identified and treated personally everywhere you go.”

E la Carte Raises $35m. The Redwood City-based developer of Presto tableside tablets for restaurants, allows diners to split checks, peruse menus, place orders, make payments and play games from their seats. According to TechCrunch, the company also opened its application programming interface to outside developers earlier this year, and has an ecosystem of companies designing apps for its tablets. The company intends to use the funds to accelerate continued growth and to expand hiring for product development and sales.

ClubW Raises $9.5m. The Los Angeles-based online wine seller offers exclusive bottles of wine directly to consumers, who choose three or more bottles a month via Club W’s recommendation engine a la carte. The company’s wine inventory is created by noteworthy winemakers who develop blends for Club W exclusively, resulting in a private label-type offering. The company intends to use the funds for product development, further integration of its supply chain and expansion of marketing initiatives.

EatWith Raises $8m. The San Francisco-based social dining network offers local dining experiences in people’s homes. The service enables travelers all over the world (more than 30 countries and 160 cities worldwide) to meet locals, experience their culture firsthand and try homemade food. With the funding, EatWith will focus on growth, building on its presence in major metros around the world (e.g. Barcelona, Rome, Paris, New York) and fueling expansion in San Francisco.

HowGood Raises $2m. The New York-based in-store grocery rating system identifies industry leaders in the food system. As an independent research organization, the company determines the overall quality of food based on criteria ranging from ingredient sourcing to labor practices and awards ratings to the best products, enabling consumers to make informed purchasing decisions. The company intends to use the funds to accelerate the growth of its products into retail markets across the U.S., and fund additional innovations.

Daojia raises $50m. The Shanghai, China-based online food ordering and delivery service provider plans to put the funds toward its target of operating in 20 to 30 cities in China by next year, and to upgrade its core restaurant delivery services. The company, which primarily focuses on restaurant food delivery, has nearly one million registered customers in eight major cities in China who make orders takes through apps, website and call centers. Notably, strategic investor JD (Jingdong, NASDAQ:JD) is an ecommerce firm that’s Alibaba’s biggest rival in China.

Good Eggs Raises $21m. The San Francisco-based local grocery delivery startup partners with farmers and foodmakers to create an online marketplace where people can buy high-quality, sustainable food from producers in their community. Currently available in the San Francisco Bay Area, Los Angeles, New Orleans and Brooklyn, Good Eggs will reportedly use the funds to aid its expansion into new markets.

Delivery Hero Raises $350m. Two weeks after reaching a $1 billion valuation, upon announcing that it had acquired local rival Pizza.de, the Berlin-based online food ordering and delivery site took in a significant cash infusion. As TechCrunch notes, the new funding will also help Delivery Hero stave off any immediate need to raise money through the public markets right away, however the company still aims to be IPO-ready within the next year. The company intends to use the funds to grow in its existing markets, including the UK and Germany, and to further accelerate international expansion.

Apple partners with health and wellness apps to connect to HealthKit. Apple’s HealthKit platform, which feeds health and wellness data from third party devices and apps into its consumer-facing app, called Health partnered with a number of leading health and fitness apps including Jawbone, MyFitnessPal, WebMD and Yummly, which allows users to send nutrition information from recipes that they made or consumed directly to the app.

Instacart partners with Whole Foods to add same day delivery. The partnership will add new dedicated Instacart shoppers within the Whole Foods’ stores, which will speed up delivery, and also allow for a pick-up model, in which customers can come to the store to get their groceries after an Instacart worker completes their shopping. The service will start in Boston and Austin before rolling out to other participating cities.

Ibotta and Roximity partner to transform the U.S. shopping experience through iBeacon technology. The partnership will enhance Ibotta’s ability to engage millions of shoppers, through ROXIMITY’s detailed and relevant information about leading consumer products and rebates available to them in their favorite stores, while they shop.

GrubHub partners with YP to integrate ordering into restaurant listings. The partnership will allow consumers to order food through the YP search directory on mobile and desktop.