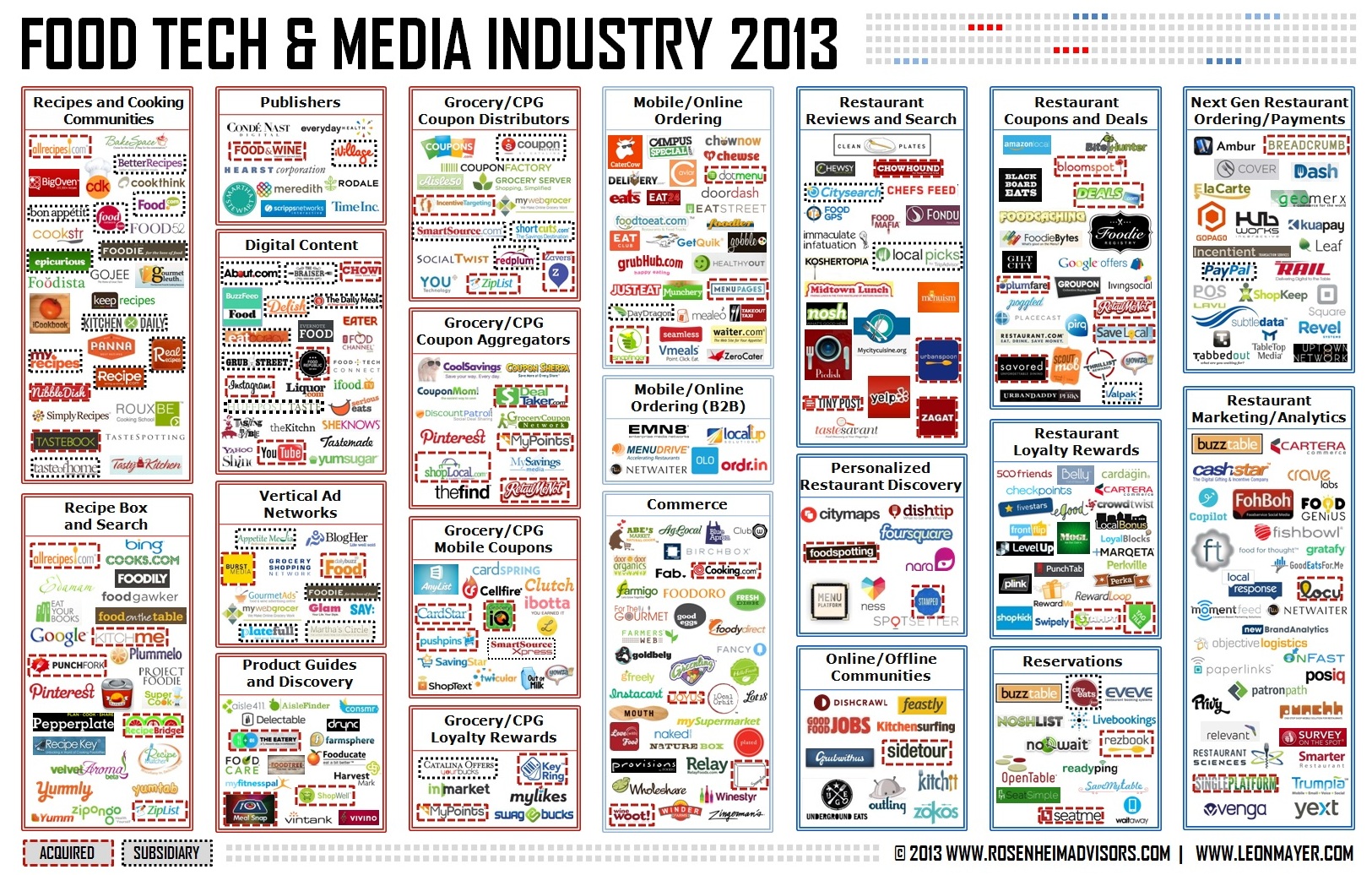 This monthly column highlights the most interesting acquisitions, financings and partnerships within the Food Tech & Media ecosystem – digital content, social, local, mobile, e-commerce, payments, marketing and analytics – to give you insights into the latest funding and growth trends.

On the deal front, September activity was cooler than the surprisingly steamy summer months, with two notable acquisitions announced and nine companies declaring a total of $54 million in investment (vs. 15 investments totaling $110m+ in August, and 10 investments totaling $315m+ in July). Although there were fewer transactions in September, the deals were sizable, especially considering that 7 of the 9 deals were either Seed (averaging $2.7m) or Series A (averaging $11.6m).

This is not a new concept, of course. But it’s a meaningful moment for the physical world to be activated by social, financial, personalized and sensory data. And likewise, it’s a relief for technology companies to chill out about counting every minute people spend on their websites — and instead figure out ways to fit usefully into the living world.

As Gannes points out, and as any food tech entrepreneur will tell you, with opportunity comes risk, “everything breaks down when the connectivity dies; the stakes are much higher in the physical world.” This is especially true when handling the logistics of delivery, even more so with perishables. Peter Relan, who was the founding head of technology at Webvan from 1998 to 2000, covers this topic on TechCrunch, detailing his thoughts on Webvan’s mistakes, including incorrect target audience segmentation + pricing and his thoughts on whether the new crop of home delivery startups will actually succeed.

Groupon Acquires SideTour. The New York-based community marketplace where people can discover, book, and host unique local experiences and will continue to operate as a separate entity, however the events will be offered through the company’s GrouponLive events business. Events average 12 attendees, hosted by chefs, artists, Olympic medalists, casting directors, sommeliers, and more, and span various categories including food, drink, architecture, history, and art.

Time, Inc. Acquires Publishing Arm of American Express (including Food & Wine and Travel & Leisure). The American Express Publishing Corporation titles will become part of Time Inc.’s Lifestyle Group, which includes magazines like Sunset, Real Simple and Southern Living. The acquisition bolsters Time Inc.’s portfolio as it prepares to spin off from Time Warner Inc. in the first quarter of 2014, and follows a 20-year relationship between the two companies, during which Time Inc. has provided management services support to AmEx. Terms of the deal weren’t disclosed, but the price tag is believed to be less than $100 million, according to sources cited by the New York Post.

DoorDash Raises $2.4m. The Palo Alto-based local delivery startup hires drivers to deliver food from restaurants in Palo Alto and Mountain View for a flat rate of $6. The company seems to have visions beyond food delivery, as its Angel List profile describes it as a “local, on-demand FedEx, starting with restaurant food delivery.” The capital will be used to grow the engineering and operations teams.

Leaf Raises $20m. The Cambridge, MA-based mobile payment platform for local business builds software and hardware (a tablet) to help small businesses sort, track and analyze their in-store transactions and access that information anywhere from the cloud. This strategic investment from Heartland Payment Systems (NYSE: HPY) will accelerate the startup’s growth in distribution, as Heartland will sell Leaf through its sales force and will also develop apps on the Leaf platform, although not exclusively.

HelloFresh Raises $7.5m. The Berlin-Germany-based meal kit delivery company currently operates in Germany, the United Kingdom (London), the Netherlands (Amsterdam), Australia (Sydney) and in the US (New York). Customers choose from up to five new recipes weekly, created by professional chefs and nutritionists, and the ingredients are delivered to the customer’s home or office. The round will fuel expansion in the U.S. market.

GoodEggs Raises $8.5m. The San Francisco-based local grocery delivery startup partners with farmers and foodmakers to create an online marketplace where people can buy high-quality, sustainable food from producers in their community. After customer put in their order, producers deliver their products to the local GoodEggs’ “Foodhub,” and from there the team packs the groceries and delivers them to local pickup spots or customers’ homes via GoodEggs’ delivery trucks. The company operates in San Francisco, Los Angeles, New Orleans and Brooklyn, and will use the additional capital to grow its existing marketplaces and launch new cities in 2014.

Zipments Raises $2.25m. The New York City-based same-day delivery platform connects businesses with professional couriers, rather than crowdsourcing. Zipments’s platform allows existing courier service providers to manage their own deliveries and gain new customers. The company first launched in Michigan and has since expanded to New York and Chicago, and will use the new funds to scale its product and expand to new cities.

MOGL raises $1.1m. The San Diego-based restaurant loyalty program gives members cash back for dining out at restaurants, while donating part of its proceeds to the Feeding America food bank program. The company has a partnership with Virgin America and Hawaiian Airlines so members can convert MOGL rewards to airline frequent flyer rewards. The company primarily operates in CA, and will use the additional funding to expand into metro areas nationwide.

aisle411 Raises $6.3m. The St. Louis, MO-based retail navigation and social shopping mobile app allows customers to search for products in stores on their smartphones, iPads or other mobile devices. The new infusion will be used to grow its reach into the global retail market as well as expand its product offerings, including new reporting capabilities for retailers and a feature that shows real-time information about what’s in stock and where.

eGood Raises $3m. The Glendora, CA- based loyalty and mobile payment startup that is building an in-store check-in and loyalty platform that enables local business to support their chosen charity or non-profit by offering donations of 1-5 percent of customer transactions used through the platform. In other words, when consumers choose their business and check-into their store, any purchases they make there will include donations to the local charity the business is supporting. The company will use the funding to continue developing their current mobile and in-store check-in for charity platform, and expand their presence in the Southern California region, as well as other parts of the U.S.

CardSpring Partners with apps like Foursquare, Trialpay, Thanx, MOGL, OnStripe to Let Merchants Create Card-Linked Offers and Campaigns Through Self-Serve Dashboard. “CardSpring Connect” is a self-serve online dashboard from CardSpring, a payments infrastructure startup founded by former Netscape engineers as a means of connecting online and mobile applications to payment cards via APIs.