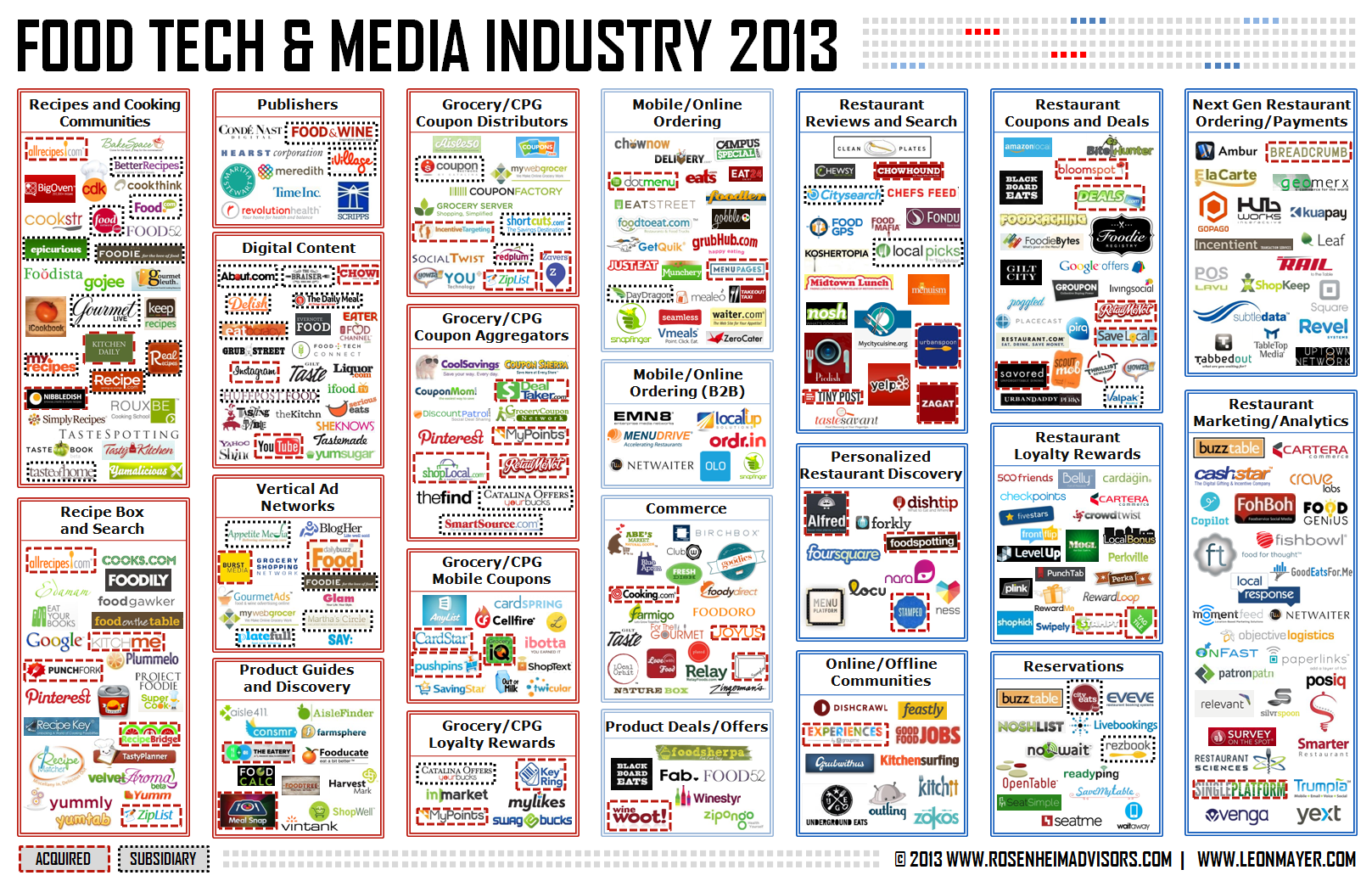 Digital media startups focused on expert and user-generated content hit the spotlight in March with investments, acquisitions and partnerships ranging from recipes to the restaurant experience. While many content companies are searching for the best way to monetize in a time when many consumers aren’t willing to pay for content, as we pointed out in the fall, food-related content is a driving force of consumer engagement both in terms of traffic and interactions with brands. In a 2012 AOL/comScore case study focused on the key drivers of video engagement, food content easily trumped both the entertainment and style categories.

Beyond the ability for highly targeted ad and marketing campaigns for brands, the everyday nature of food-related content drives repeated use cases for consumers and often converts into actionable leads: coupons, grocery shopping, restaurant reservations, travel, e-commerce and more. As pointed out in a recent Restaurant SmartBrief article, food dominates all other categories on Pinterest, and in one survey 33% of respondents claim to have purchased food or cooking-related items (the biggest category in the group) after having seen the item on Pinterest. Furthermore, consumers are increasingly depending on their mobile devices to deliver (and interact) with this content through email, apps and the web, thus most companies featured below have included mobile strategy as part of their next phase of growth.

TripAdvisor Acquires Tiny Post. The travel and local reviews site purchased Tiny Post, which is “like Instagram for Yelp reviews.”  According to TechFlash, TripAdvisor CEO Steve Kaufer recently stated that “rich user-generated content is the lifeblood of the business.” Given the high engagement factor of food content – especially photos – and TripAdvisor’s recent restaurant data partnership, TripAdvisor seems to be eyeing the food vertical as a driver of traffic. TechCrunch reports this was an acqui-hire as well as a product acquisition.

Coupons.com Acquires KitchMe. As Coupons.com unveiled the public beta launch of their new next-generation meal planning and savings web/mobile application, the company revealed it had actually completed the acquisition of the base product, KitchMe, almost a year ago (Q2 of 2012). The visual recipe saving, meal planning and shopping list service was acquired before ever publicly launching, and the two founders joined Coupons.com to continue working on KitchMe. The shopping list capability is powered by the same technology used in Coupons.com’s Grocery iQ – a product that I personally find clunky and inelegant – so perhaps the new capabilities and interface will help Coupons.com compete with the numerous apps and websites in this sector.

Pinterest Acquires Livestar. With its second acquisition, Pinterest scooped up the engineering talent of the personalized recommendations mobile app and will be shutting down the operations of Seattle-based Livestar immediately. This comes after the recent acquisition of Punchfork, which was also an engineering aqui-hire, and on the heels of the wide launch of Pinterest’s redesign. As GigaOM points out, user experience is key to Pinterest and the management is constantly pushing the team to come up with new ways to engage people’s attention on the site.

Target Acquires Cooking.com and Chefs Catalog. In order to expand its presence in the $3bn+ cooking and kitchenware market, and serve customers who are increasingly spending time both in the kitchen and shopping online, Target  acquired two established cooking e-commerce companies in separate transactions.  Following the closings, the two businesses will be combined to create a new, wholly owned subsidiary of Target and both brands will continue to operate under their current names.

500friends Raises $5m.  The loyalty and marketing SaaS company, which has made its name in online loyalty initiatives for mid- to enterprise-sized retail companies, will use the new funding to bolster its omichannel loyalty solutions (i.e. linking brink & mortar to digital platforms). According to PandoDaily this means “building out the research and development team, building out its mobile software development kit, expanding its sales and marketing team, and building a platform that supports Android devices.” In addition to the equity raise, the company also raised $2m in debt.

Tastemade Raises $5.3m. The You-Tube-centric multi-channel food programming network, founded last year by three top executives from Demand Media, will use the proceeds to build out its network of affiliated channels and develop more original content for the Tastemade channel. According to the Los Angeles Business Journal, the company received financing from YouTube as part of YouTube’s strategy to increase high-quality original content (a strategy that did not pan out for most partners), and built a 7,000-square-foot production studio in Santa Monica that features a kitchen set. According to Geoff Yang, the lead investor at Redpoint Ventures, the team is focused on creating “what traditional networks like Food Network, Cooking Channel, or Travel Channel did – with one difference: building it for a connected, broadband world.”

TripAdvisor Partners with Factual to Create Global Restaurant Data Partnership. To bolster TripAdvisor’s dining options and reviews with location-specific restaurant data, the company partnered with Factual, one of the largest global geo-location databases which will in turn, receive TripAdvisor’s user-generated review data to help to maintain Factual’s Global Places data. According to PandoDaily, Factual already has “relationships with Foursquare, Yelp, LivingSocial, SimpleGeo and Trulia, while it is widely reported, though not confirmed publicly, that it also powers elements of Facebook’s and Google’s platforms.”

Evernote Food Integrates OpenTable and Foursquare with new update. In order to improve functionality for Evernote’s mobile app dedicated to documenting cooking and dining experiences, the new features allows users to discover restaurants and dishes through Foursquare’s ratings and reserve a table through OpenTable, directly within the app. The company also added additional recipe sharing, ability to import recipes from Evernote into Evernote Food, and regional recipe content partnerships in China and Japan.

Locu Partners with Automattic to Bring Real-Time Menus to WordPress.com Restaurant Sites. After launching a restaurant-focused vertical in November, WordPress.com improved restaurateurs’ ability to update their menu through a new integration with the menu management system and dashboard, Locu. The integration provides menu templates, printable menus, enhanced SEO and free advertising to Locu’s content partners (including OpenTable and CitySearch).

LevelUp Announces Several Key Mobile Payment Partnerships. Heartland, one of the largest payments processors, partnered with LevelUp to accelerate national acceptance of m-payments through a national rollout of a mobile payment solution. As FastCasual notes, “In addition to the LevelUp app for individual merchants, the companies will also co-promote white-labeled apps for businesses with multiple locations.” At SXSW, LevelUp partnered with Nokia to demonstrate the service, and also debuted a newly-refined version of its mobile phone scanner which it designed using a 3-D printer from MakerBot to prototype the hardware.