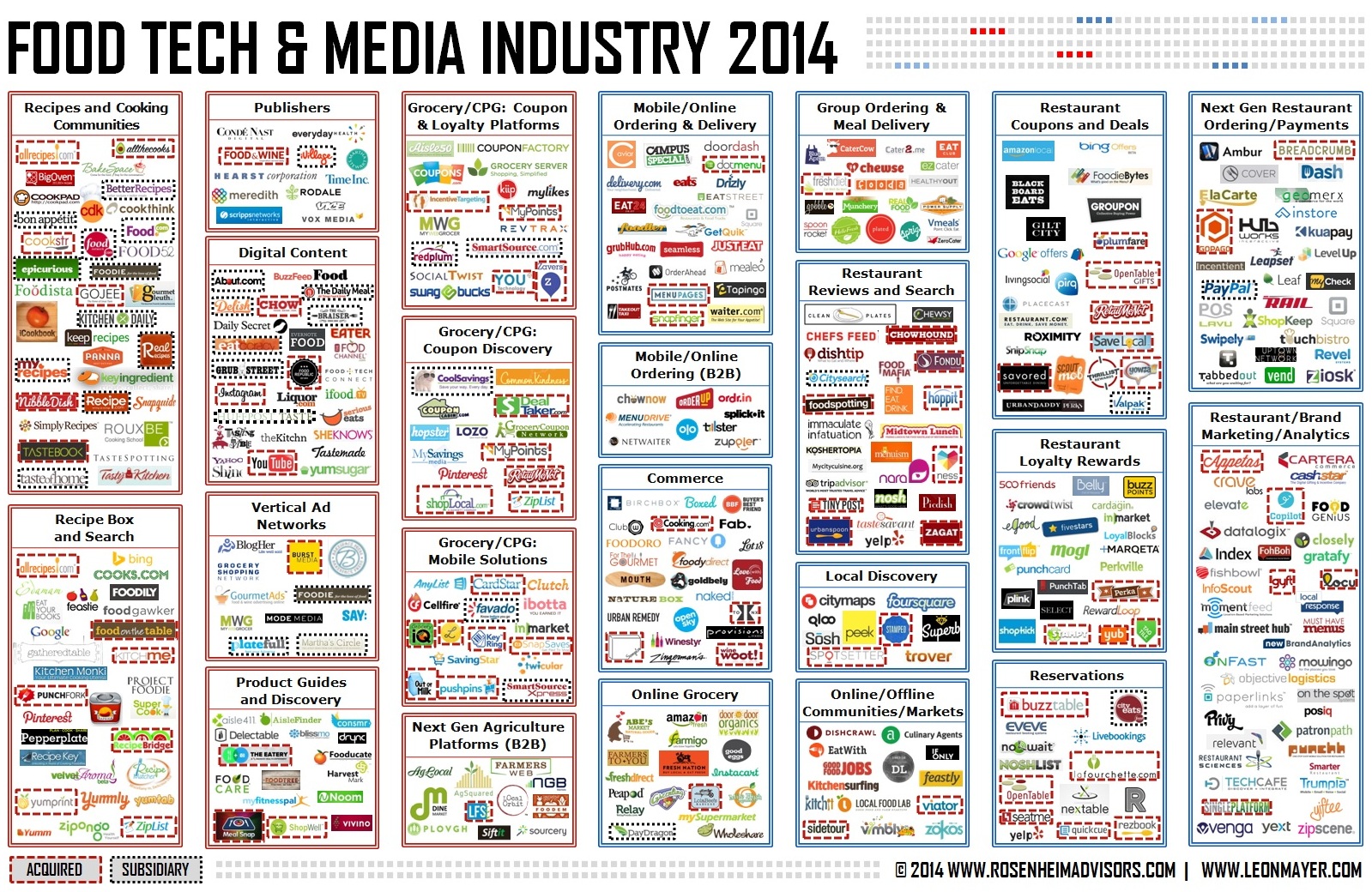 With six acquisitions and eight financings, August was slightly less active than the previous month, bringing almost $510 million into the food tech & media ecosystem (versus $740m in July). There was a strong international presence in August with over half of the deals coming from companies headquartered outside the U.S., and a prominence of both restaurant-related technologies as well as subscription commerce companies.

Mobile payments have bubbled up to become a hot topic of discussion again (especially with the anticipated launch of Apple Pay). A common criticism of mobile payments is that they are solving a problem that consumers don’t have, as pulling out your credit card isn’t actually considered much of a hassle. However the restaurant industry is unique in that mobile payments have the ability to actually speed up the experience (whether for takeout, dine in or delivery), thus creating perceivable value to consumers.

Thus, in addition to restaurant industry incumbents, the broader industry has taken notice, and is flocking to restaurants as the first frontier of changing the mobile consumer’s payment behavior. Amazon.com has been working on a tablet-based checkout and card-reading system that could be used in restaurants, and even McDonald’s is getting in the game, with a new NFC-enabled mobile payment and ordering app. Paypal, Square, Groupon, Apple, OpenTable… the list goes on, and that doesn’t count the dozens of startups in this space. Mobile in general is still in a nascent stage as it relates to the restaurant industry, but 2015 will likely be a formative year in establishing a new level of traction, especially among the mobile-first millennial.

Zomato Acquires Two European Food Guides. After its first acquisition last month, the India-based restaurant search and review site acquired Czech Republic’s Lunchtime.cz and Slovakia’s Obedovat.sk. According to Tech in Asia, Europe will be one of Zomato’s key focus areas in the coming 12 months, and the company will expand further in the region.

Delivery Hero buys rival Pizza.de. Germany-based Delivery Hero has acquired Pizza.de, a Germany-based online food ordering platform and former longstanding competitor of Delivery Hero. The acquisition enables the company consolidate its position in its home market before turning its sights abroad, with an expected focus on expanding to Asia and Latin America. According to TechCrunch, Delivery Hero aims to be IPO-ready within the next year.

OpenTable Acquires Copilot. The San Francisco-based restaurant sales analytics company utilizes historical POS data to help restaurants track the effectiveness of promotions, business relative to other restaurants, the cost of an empty seat, and other performance analyses. The service, which was in beta in Los Angeles and San Francisco, will continue to operate under the OpenTable umbrella, and in the announcement it was noted that OpenTable will begin offering the free service to its restaurant customers in other markets in the near future.

Swagbucks Acquires SodaHead. The Encino, CA-based web polling company includes its website and native mobile apps, as well as its Pollware distributed native polling ad product, will help Swagbucks, a consumer rewards platform, gather deeper consumer data points and increase user acquisition. PandoDaily reports that the acquisition began initially as a business development discussion, but as the discussions progressed, “it became obvious to all involved that the best outcome for both parties was for the two companies to join forces permanently.” According to the release, this roll-up is the “first of a series of competitive market initiatives Prodege (the parent company of Swagbucks) plans to pursue in the coming months”, so perhaps there will be more acquisitions on the horizon.

TinyOwl raises $3m. Mumbai-based Location-based food ordering startup asserts that its app can detect the users’ locations and show restaurants in their vicinity, suggest exclusive orders and deals to customers, and saves their address and card details securely so that they can save time while placing orders again.

OrderUp Raisse $7m. The Baltimore, MD-based online and mobile food ordering and delivery service is currently available in 35 markets throughout the U.S., and provides franchising opportunities in select towns. The company, which specifically focuses on serving smaller urban centers, intends to use the funds for national growth and development of its delivery technology and services, and will also open two offices in New York City and Boulder, CO to build out their development and marketing teams.

Try the World Raises $700k.The New York-based global specialty food subscription box has shipped boxes with FDA-approved packaged products from France, Japan, Brazil, Italy, Turkey, India, and more. The boxes can be purchased via subscription for every other month, or individually. According to Fortune, the company works with foreign brands to get deep discounts on the items included in the boxes, since many foreign food brands are seeking to grow in the U.S. Fortune also reports the funding will be used to expand its offerings, invest in marketing, and build an online marketplace, where customers can directly purchase items from the monthly boxes.

foodpanda Raises $60m. Six months after raising $20m, and two months after acquiring Delivery Club, The Berlin-based food delivery company which was created by Berlin-based Rocket Internet forges ahead in the global race to dominate the restaurant ordering and delivery market. Its largest coverage area is India, where it partners with 3,500 restaurants across 30 cities, but it is also present in Europe, Africa, the Middle East and Latin America. The company intends to use the funds to strengthen and expand its position in existing countries.

Pact Coffee Raises $3.3m. The London-based subscription-based coffee company delivers whole or freshly ground hand roasted coffee beans which are matched to each customer’s brew method. According to TechCrunch, the new investment will be used to accelerate growth, as well as growing the startup’s team from 30 to 50 in the UK.

Plated Raises $15m. The New York-based subscription service for ready-to-cook meal ingredients and recipes. Plated positionis itself as offering its customers greater variety on the menu and greater ordering flexibility than its competitors. Of note, according to the Wall Street Journal the company was careful not to take on too much capital, stating “We made a conscious decision after seeing some other New York-based e-commerce companies raise too much money early in their life cycles, to be more conservative.” During the month, the company also announced a partnership with Time Inc. to serve recipes created by Real Simple, Cooking Light.

Provender Raises $800K. The Montreal-based online marketplace allows chefs and grocers to buy directly from local farms. Provender aggregates products into a calendar for restaurateurs to browse and buy from. They use structured data-driven updates from their farmers to facilitate in-ground inventory management. According to BetaKit Provender is preparing for an entrance to the Boston market, while this fall or winter it will likely launch in either Vancouver or San Francisco.

Settle Raises $1.5. The Ukraine-based mobile payment service for restaurant-goers. The app, which launched in August, lets restaurant/bar customers order, settle the tab, and tip from their phone. It connects with the user’s bank card but doesn’t store that information, and charges a commission on each bill.

Time Inc. Partners with Plated to serve recipes created by Real Simple, Cooking Light. Real Simple will kick off a test run with Plated based on the “Month of Dinners” feature in its September issue, just in time for the back-to-school season. And In December, Plated will begin offering meal kits based on recipes from the “Start Your Year Off Light” feature in Cooking Light’s January/February 2015 issue.

Uber Partners with Starbucks, OpenTable and More as it Opens API to All Developers. Partners each introduced updated versions of their mobile apps, each with a button to hail an Uber ride. The moves are part of Uber’s strategy to become more ubiquitous in the software on people’s smartphones and geographically.

Kitchensurfing Partnered with Uber to offer On-Demand Chefs in the Hamptons. The partnership, called UberCHEF, provided on-demand professional chefs who were dropped at customer’s homes to prepare a gourmet meal inspired by grilled summer favorites.

Epicurious Partners with Swirl Networks to Bring Beacon-Powered Mobile Experiences to In-Store Shoppers. Rather than food or grocery locations like the partnership epicurious formed with inMarket, Swirl beacons installed in retail shopping locations will be used to trigger delivery of value-added lifestyle content and personalized offers to Epicurious mobile app users.

Foodily Partners with FreshDirect to Launch Popcart, which Allows Customers to Order Ingredients of Recipes. Using a bookmarklet, users can highlight any online recipe and access a pop-up window with the ingredients required, which can then be bundled together and delivered by FreshDirect. Foodily will operate exclusively with FreshDirect for an undisclosed time period.

Tastemade Partners with Factual to tag Videos with Location Data. Using Factual’s Geopulse Geotag, Tastemade users can tag videos with location data, helping build a global database of restaurants. The partnership will allow consumers to have a curated and geo-specific video guide to restaurants near them.

Urbanspoon Partners with Chefs Feed to Add Top Chef Recommendations to Bolster Mobile Restaurant Search. The integration with Chefs Feed, a dining guide powered by the recommendations of the world’s top chefs, was intended to fortify mobile’s role, and specifically UrbanSpoon’s role, in restaurant searches as an influential path-to-purchase catalyst.