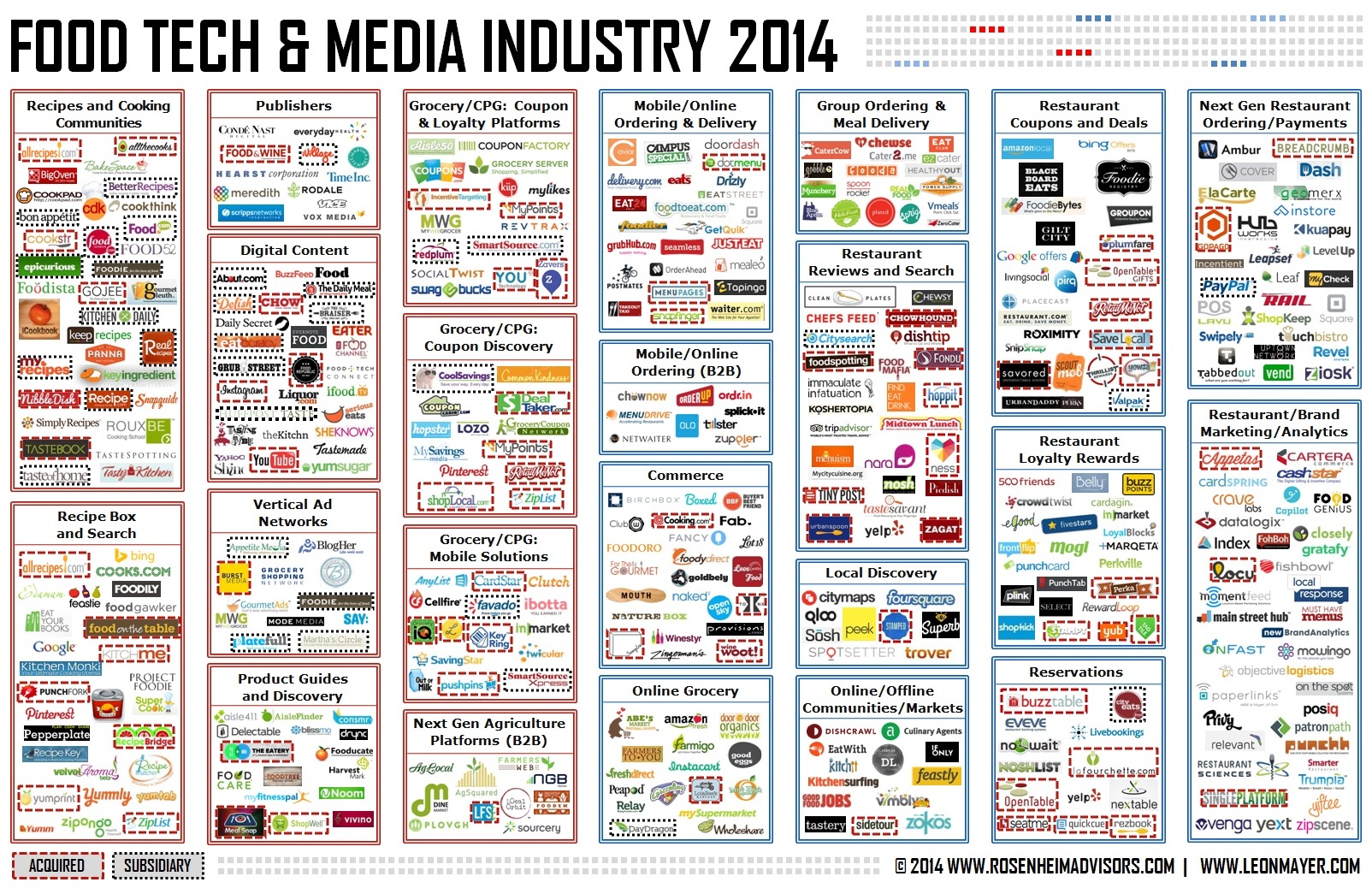 Three acquisitions and seventeen notable financings funneled close to $575 million into the food tech ecosystem in May. Restaurant technology and ecommerce were both dominant themes, and earlier-stage companies made a comeback with eleven of the fundraises at the seed or series A stage.

That said, the trend towards larger rounds was prominent, even at early stages, with an average seed size of $3m and series A size of $6.1m. This reflects an overall theme in the tech industry of shifting company lifecycles, as many startups have the ability to build the product and gain traction earlier than previous generations; a concept that is well-articulated in Ben Narasin’s article, “Series A Is The New Series B.”

In other news, the battle within the restaurant reservations, ordering and delivery space continues to escalate as a number of incumbents throw their hats into new territories. Yelp waded deeper into reservations using its acquired SeatMe technology by offering free reservations as long as the restaurant has “claimed” its Yelp profile page. TripAdvisor has put its acquisition of LaFourchette to quick use, and has already begun to give users the option to reserve tables from TripAdvisor’s city-information pages at some 12,000 restaurants across Europe. And – spoiler alert for June’s report – Priceline forged into the restaurant world with its $2.6 billion acquisition of OpenTable.

But that is just the beginning. Facebook’s new restaurant menu service gets it halfway to GrubHub, as restaurants can now post menus on their Facebook pages. Amazon is now (slowly) rolling out a food takeout service, a direct competitor to GrubHub, Seamless and DeliveryHero (and is also weighing the possibility of acquiring companies to expand in services, according to TechCrunch). Square recently introduced a new app called Order, that allows users to browse the selection of nearby shops, cafes, and restaurants, choose what they want, buy it (and optionally add a tip), and then receive a notification to pick it up when ready. And even Airbnb is joining the party in trying to disrupt the restaurant sector with its new pilot program (in San Francisco) for people to host home-cooked meals served in their homes.

Intuit Acquires Lettuce. The Venice, CA–based inventory order management platform will help position Intuit as the go-to place for small and medium businesses to run their offices in the cloud. According to PandoDaily, “Lettuce will be integrated into Intuit’s own SaaS-based Quickbooks online, offering small business customers another reason to transition from the company’s legacy desktop software offering to its future-minded cloud platform.” Also according to a post-acquisition update by PandoDaily, rather than sunsetting the product as often happens with acquisitions, “Lettuce’s existing platform is being treated within Intuit as a future hub through which Intuit customers will manage inventory, finances, and a variety of other functions”.

Google Acquires Appetas. The Seattle, WA-based restaurant marketing platform, which enables restaurants to create web, mobile, and social sites, will be shut down after the acquisition, although in their announcement about the acquisition, the team alluded to broadening their focus at Google to include all merchants. As the Wall Street Journal points out, “Appetas fits Google’s ambitions for improving the quality of websites and making it easier to search for local businesses. Both can help generate more revenue from search advertising.”

TripAdvisor Acquires LaFourchette. The acquisition of the Paris-based European online restaurant reservation platform will help attract and retain users and restaurants to the TripAdvisor website, while presenting an opportunity to grow restaurant reservation revenues. LaFourchette also provides software to help restaurants move online, including a flexible online booking, discounts and data tool, which could enhance the relationship with restaurants. LaFourchette is a partner to over 12,000 restaurants in France, Spain and Switzerland, and it will continue to operate from its existing European offices, with headquarters in Paris and Barcelona.

Swipely Raises $20m. The Providence, RI payment processing company compiles and analyzes data from payment networks, POS systems and the social web to provide restaurants with financial, operational and marketing data, as well as actionable insights for things like menu item profitability and staff training to boost revenue and tips. The proceeds will be used for marketing, product expansion and continued team build out.

Datalogix Raises $45m. The Westminster, CO-based examines the offline sales impact from ads on Facebook and Twitter for retailers and CPG clients. As I noted in February, Datalogix acquired Spire Marketing which uses analytics from grocery loyalty card data, point-of-sale purchase data, and trade-level data to power in-store marketing initiatives which drive spontaneous purchases. TechCrunch reports that Datalogix will use the funding to develop a wider suite of audience and measurement products. Furthermore, The Wall Street Journal recently reported the company was in talks with Goldman Sachs, Deutsche Bank, and Barclays about backing a $75 million IPO.

Farmeron Raises $2.7m. The Columbus, OH-based dairy and cattle farm business management software that allows farmers to update and manage their data online. TechCrunch reports the funding will be used to go after enterprise sales.

Yoyo Raises $5m. The London-based mobile payment and loyalty app allows users to purchase items using an online wallet and receive loyalty points for rewards or discounts with each transaction. The app is currently available at food and drink outlets at Imperial College London, and is planned to expand to the University of Greenwich and University of Westminster soon, as well as high-street retailers and other universities. The funding will be used to expand in the UK, and continue to grow its partnership programme with Point of Sale software vendors and leading catering companies. The company plans to expand into the US and European markets next year.

DoorDash Raises $17.3m. The Palo Alto-based on-demand restaurant food delivery platform considers itself a “tech and logistics company that happens to deal in food”. As I noted in October, the company seems to have visions beyond food delivery, as its Angel List profile describes it as a “local, on-demand FedEx, starting with restaurant food delivery.” The company will use the funding to grow out the team, continue developing the dispatch technology and pursue a national rollout.

Drizly Raises $2.5m. The Sherborn, MA on-demand alcohol delivery startup allows user to order their favorite beer, wine or liquor and have it delivered in 20-40 minutes. Delivery drivers then authenticate and validate IDs using the company’s forensic ID verification technology. Drizly will use the seed capital to expand distribution of its service into new markets; build user experiences and interfaces; increase operational capacity and customer service; and drive customer awareness and acquisition.

NoWait Raises $10m. The Pittsburgh-based app for restaurant waiting lists and mobile network for casual-dining restaurants launched its consumer-facing guest app earlier this year. The company will use the funds to expand its network of restaurants and consumers, ramp up engineering to support its technology roadmap, and continue developing more products and services to enhance the guest experience and restaurant operations.

Yummy77 Raises $20m. The Shanghai-based ecommerce company which ships groceries and seasonally fresh products (including seafood, meat, and dairy) across China, took in a strategic investment from Amazon, which will hold a minority stake in the company. According to Technode this marks the first time that Amazon has invested in a Chinese company after launching in the country ten years ago, and Yummy77 will continue to operate independently instead of being folded into Amazon China. TechNode also revealed that Yummy77′s sales exceed $100 million yuan (about $16 million) in December 2013.

Pinterest Raises $200m. With this most recent funding, the visual search platform is now one of the most valuable venture-backed startups in the world. Although it is still early in the company’s revenue cycle, many advertisers see Pinterest as a more valuable advertising host than other social sites, since its users often purchase products pinned on the site — which could allow the company to start charging higher ad rates. For example, Pinterest recently started selling advertising to major corporations such as General Mills and Kraft, charging up to $2 million for three- to six-month commitments, The Wall Street Journal reported. The company plans to use the additional cash to expand its global presence. It currently serves 31 countries and has offices in France, the U.K. and Japan.

Swagbucks Raises $60m. The El Segundo, CA-based online loyalty rewards community differentiates itself from other coupon/loyalty companies by offering rewards for everyday Web discovery activity – including searching, shopping, entertainment, discounted offers, surveys and games. The new funding will be invested in mobile, product development, and expansion into international markets. In addition to the new capital, Swagbucks named former Fandango.com and Shopzilla Inc. Chief Executive Officer Chuck Davis as CEO. Swagbucks reports that it has been profitable since 2010 and had $53 million in 2013 revenues, up 51% from 2012.

Boxed Raises $6.5m. The New York, NY-based mobile commerce company offers customers over 800 warehouse club products with no membership fees and expedited shipping to all of the contiguous 48 states. Its back-end software has enabled Boxed to optimize customers’ shopping experience, from purchase to fulfillment to delivery. According to CEO Chieh Huang, about 80 percent of items added to user’s carts don’t come from search, but come from the app’s discovery mechanism.

Delectable Raises $3m. The San Francisco-based mobile iOS app for discovering and buying wines has a dataset of over 2 million wines which provides identification and information on any bottle from a digital photo. The company intends to use the funds to grow the engineering team and technology.

Table8 Raises $4.6m. The San Francisco-based restaurant reservations app charges users a fee to book last-minute reservations at restaurants that are otherwise fully booked. The app is live in San Francisco and has plans to expand to other cities including New York, London and Chicago in the near future. The company intends to use the funds to accelerate the roll out of Table8 across the US, to develop their platform and make it available through the App Center.

Zuppler and LevelUp Partner to bridge the gap between online ordering and mobile payments. The partnership provides restaurants with a ‘commerce everywhere’ solution by combining mobile payment and in-app ordering into a single mobile experience.

Gannett’s Key Ring partners with inMarket’s Mobile to Mortar’ Platform to use beacons to provide consumers with individualized content as they shop. The integration of beacon technology into Key Ring allows brands and advertisers to reach shoppers at the point of purchase and provide consumers with targeted content as they shop.

PrestoFresh Grocery Delivery partners with Zagara’s Marketplace to expand delivery area and products. With the partnership, PrestoFresh, an online, next-day grocery delivery service, will have access to Zagara’s inventory, including locally raised produce and fresh-cut meats.