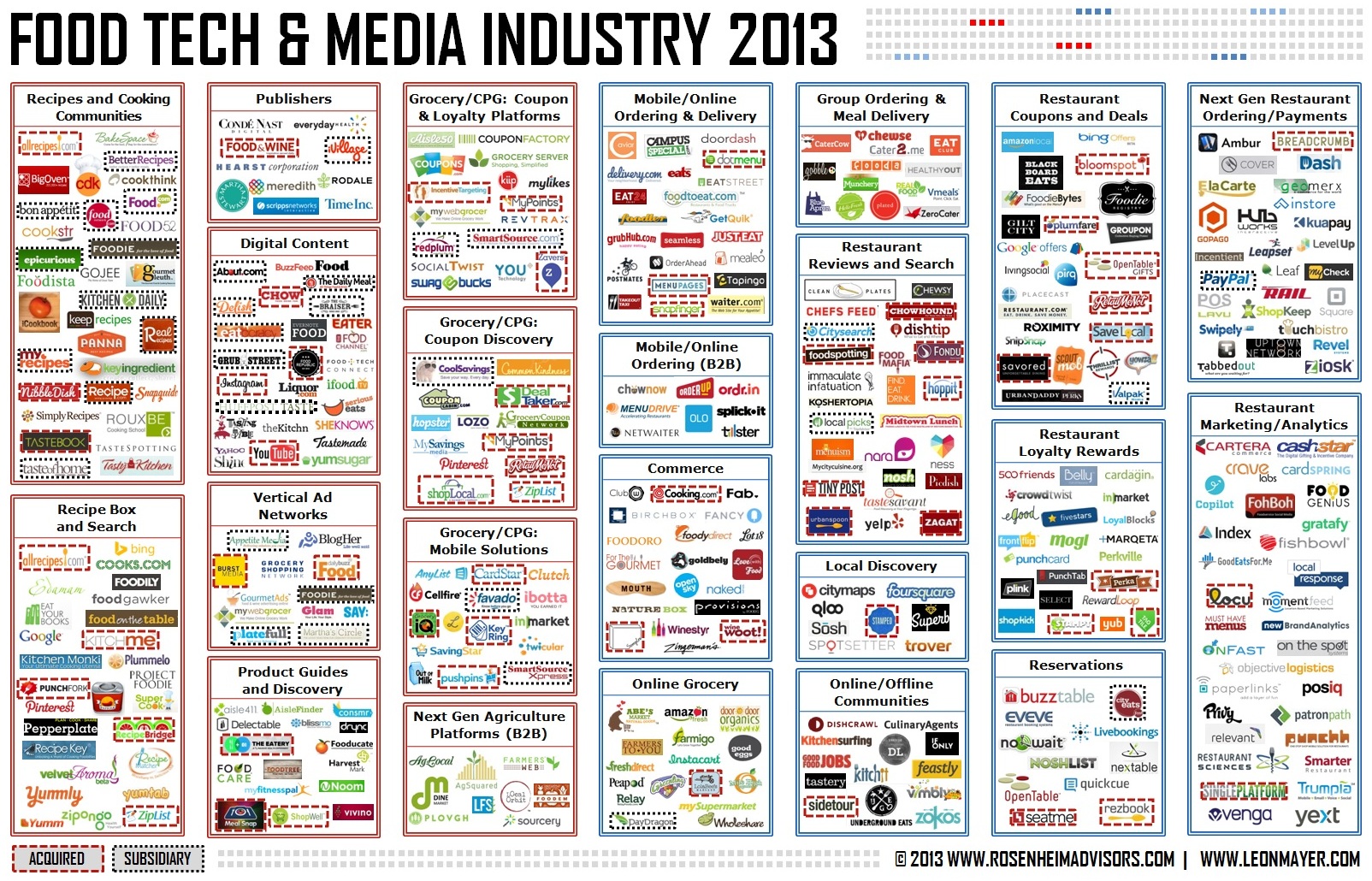 The deal activity in November picked up a bit from last month with four notable acquisitions, eight early-stage investments (totaling $36.7m) and one Series D (an Indian-based company, Zomato, which raised $27m). The deals represented a variety of categories including health, content, delivery, loyalty and commerce/restaurant technologies.

One theme that dominated news throughout the month was the notion of same-day delivery and solving the problem of the last mile. While it’s still hard to find an article on this topic that manages to resist a reference to the massive failure/flameout/implosion/[insert cataclysmic descriptor] of WebVan and Kozmo.com, the discussion is beginning to evolve. The New York Times calls same-day delivery “a new battleground for e-commerce,” with many companies scrambling to find the right new formula.

Much of the same-day delivery discussion is focused on retail products, but grocery, meals and restaurant delivery are a major component as well. AmazonFresh is launching its third city – San Francisco – in December, and services like Instacart, Good Eggs (see “M&A” section), Sprig (see “Funding” section) and Postmates (see “Funding” section) each expanded their empire in November. Even Whole Foods is testing out online ordering with a new ‘click and collect’ system. And don’t worry, bulk goods haven’t been left out of the fold: Google Shopping Express is now delivering goods from Costco; Amazon is reportedly launching an online wholesale store called “Pantry”; and startup Boxed announced it is launching nationally.

Although the economics are still being tested and it is likely some of the players in this space will disappear, we are a long way from the days of WebVan. For more discussion on recent VC investment in the food space, check out Pandodaily’s article: Software eats dinner: Why VCs are pouring cash into food startups.

AgSquared Acquires Local Dirt. The New York-based provider of cloud-based farm management software for small farms acquired Madison, Wisconsin-based Local Dirt, a local food marketplace and sales management tool that connects consumers and wholesalers directly with farmers. As Danielle Gould notes in her coverage at Forbes, the overarching rationale for the deal is to bring interoperability among online services for the agriculture sector. According to Gould, “for the next year, AgSquared and Local Dirt will operate as separate tools, but AgSquared will focus on building a basic integration so its users can get their harvest into Local Dirt’s product inventory and get their sales data from Local Dirt into AgSquared. Over time, however, AgSquared will integrate those sales management features into one platform. It has no plans to launch a marketplace.”

Under Armour Acquires MapMyFitness. The Austin-based startup owns one of the largest global mobile fitness communities (20m+ registered users), as well as a suite of websites and related apps, including nutrition tracking. The acquisition will help the athletic apparel company accelerate its plans to build a mobile fitness platform and enter the biometric measurement and tracking arena. As a wholly-owned subsidiary of Under Armour, MapMyFitness will continue to operate separately.

Vox Media Acquires Curbed Network (which includes Eater.com). The Washington DC-based publisher of content sites like The Verge (tech) and SB Nation (sports) acquired the Manhattan-based lifestyle publisher of Eater.com (food), Racked.com (shopping/fashion) and Curbed.com (real estate). In an interview with the New York Times, Vox’s CEO Jim Bankoff explains the rationale: “Both Vox and Curbed value storytelling and as a result have attracted the otherwise hard to reach young, affluent, social consumers. We think this combined expanded platform will clearly attract premium advertisers.” For a fantastic analysis on the acquisition, which is definitely worth a read for anyone interested in the dynamics (and future) of the digital content space, check out this article by Reuters’ Felix Salmon. Salmon notes that Curbed Network was acquired at a relatively low multiple (less than four times revenues).

Good Eggs Acquires LolaBee’s Harvest. The San Francisco-based online farmer’s market and food delivery service was acquired by Good Eggs to expand its own online marketplace and network of participating farmers and businesses. LolaBee’s Harvest will shut down its all accounts and move its customers to Good Eggs.

Mouth Foods Raises $1.5m. The Brooklyn-based curated online store for “Indie” foods. Rather than an open marketplace, like Foodoro or Foodzie, the company searches nationwide for the best food makers and products it deems as “indie,” buys products in bulk, then stores and ships them directly to customers, and of course adds photographs and snazzy marketing/copy into the mix. According to the Wall Street Journal, the company will use the funding to continue to find and add products to its site, market its own brand, and vendors’ products across the U.S., and to continue to improve its Internet and mobile websites.

Index Raises $7m. The San Francisco-based analytics software startup helps grocers, restaurants and specialty retailers recognize and reward customers every time they engage with the brand. Index’s software, which integrates with a retailer’s point-of-sale, links customer brand interactions to a unified customer profile. Once customers are identified, the company delivers personalized, targeted news, rewards and offers to build loyalty and strengthen customer relationships. The proceeds will support the company’s continued rollout with retailers and the growth of its team.

Yub Raises $12m. The Mountain View-based offline affiliate network Yub tracks consumers from online click-throughs to offline purchases, directly linking digital marketing spending to offline revenue. The company also partners with restaurants and retailers to offer special promotions so customers can earn rewards while shopping. Yub was incubated within TrialPay, a transactional advertising and cross-platform monetization company, and will launch as an independent company with the fresh financing.

TouchBistro Raises $4.5m. The Toronto-based digital menu and restaurant management startup provides iPad tableside ordering and point-of-sale technology for the food and beverage industry. According to the Financial Post, the company’s app is currently used in 22 countries around the world, and the company recently inked new deals with PayPal and payment processing giant Moneris Solutions to help integrate its technology with payment processors. The company intends to use the funding to expand its presence in New York, open a San Francisco office, and translate its product into other languages to further accelerate its growth in global markets.

Qloo Raises $3m. The New York-based “cultural discovery” engine provides personalized recommendations for restaurants, bars, entertainment, travel, fashion and other categories. Pronounced “clue”, the app requires new users to select at least four categories and enter one of their favorite things in each. Users then provide the app with feedback by rating the suggestions. The company earns affiliate feed for recommendations that result in a transaction (make a reservation through OpenTable, book a hotel through Expedia, order a book from Amazon, etc.). The company will use the funds to continue development of the app (and release an Android version), as well as expand into new cities.

Sprig Raises $1.2m. The San Francisco-based healthy meal delivery startup prepares chef-made locally-sourced seasonal meals to customers in select neighborhoods of San Francisco (SOMA and Mission Bay). One of Sprig’s distinguishing factors is that customers don’t need to order days or hours in advance; the company’s goal is to deliver the meal 20 minutes of ordering, on average.

Zomato Raises $37m. The India-based online restaurant discovery and review site and app currently operates in 11 countries, including the recent launch of its services in Brazil, Turkey and Indonesia. Similar to Yelp, but with more detailed information on menu items, photos and prices, the company currently derives a third of its traffic from non-Indian markets, but that is quickly changing (a year ago 100 percent was in India). According to TechCrunch, the company plans to enter the US in the future, but it will “tweak its feature set so it can offer something attractive enough to crack the market so isn’t going to tackle that market immediately.” The company plans to use the proceeds to expand into 22 additional markets over the next two years.

Bing Partners With TripAdvisor to Integrate Content Into Search Results. Bing will now display TripAdvisor reviews and photos as well as TripAdvisor’s hotel price comparison tool in search engine result pages. TripAdvisor’s full content library including restaurants, hotels and attractions will reportedly be available to Bing, which could deepen engagement and search frequency on the Bing platform.

Square Partners With Staples To Sell Square Stand Register Replacements. In order to increase use among SMBs, Staples will begin to sell the Square Stand, a piece of hardware that turns a merchant’s iPad into a card-swiping register. The deal covers 1,000 Staples stores in the U.S., as well as Staples.com, and comes on the back of the device also being sold in BestBuy, Apple stores and online from Square itself.

Mobile CRM Suite Punchh Partners with MonkeyMedia Software to Create Restaurant Catering Rewards and Loyalty Program. According to Punchh, the partnership will deliver the industry’s first solution to help restaurant chains grow their catering business by rewarding customers for their repeat catering business.