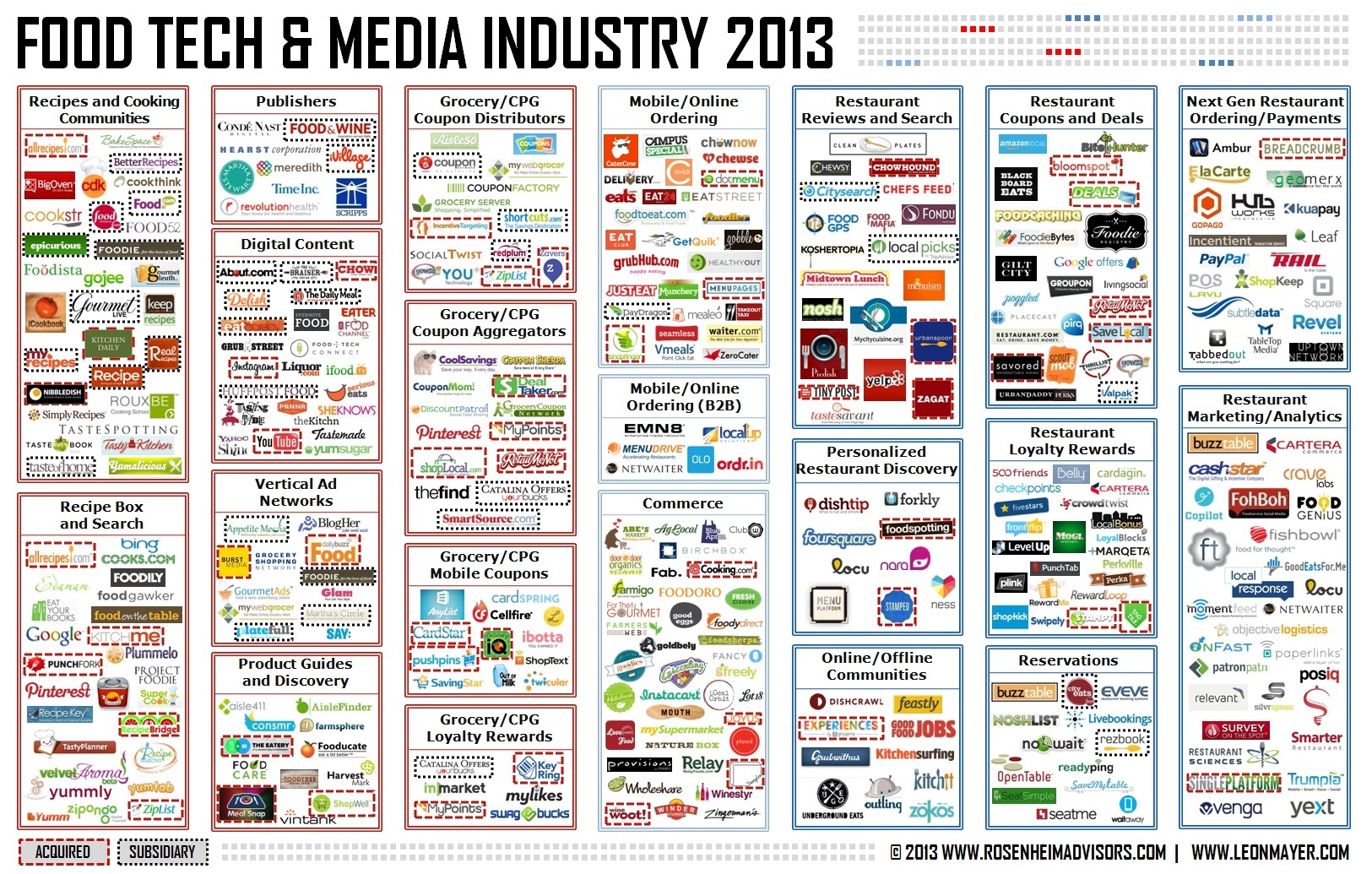 While we’ve often discussed delivery trends in the space, few announcements have had the potential to disrupt the entire delivery ecosystem – from grocery to restaurants to e-commerce – as Amazon.com’s plans for the expansion of AmazonFresh, a same-day grocery delivery service it has been field-testing in Seattle since 2007. The service launched in select areas of Los Angeles in early June, with San Francisco scheduled to launch later this year and twenty more markets scheduled for 2014.

Beyond its strength of infrastructure and massive customer base, Amazon has an edge over most (if not all) competitors in the grocery and local delivery arena: it does not need to make money on the grocery business. Amazon can offset the lower-margin AmazonFresh items by combining deliveries with orders for high-margin items (like electronics), and it has been reported that new warehouses will have both refrigerated areas for food and space nearby to store up to one million general merchandise products. As Zeitgeist Research points out, “Grocery is a frequency business. If Amazon can deliver to consumers’ homes two or three times a week, they can up-sell other items.”

This has implications beyond just the grocery ecosystem. Although it hasn’t been discussed much, AmazonFresh also includes deliveries from a curated selection of local restaurants and shops, both in the established Seattle metro area and in Los Angeles. The company is able to offer fresh and specialty products that are typically not possible with a warehouse model, while still benefiting from the infrastructure and costs of a warehouse model. As Alistair Barr notes, the potential disruption to the delivery ecosystem doesn’t end there, given “a broad-based delivery service employing Amazon trucks to deliver directly to homes could have implications for UPS, FedEx and other package delivery companies that currently ship Amazon goods.” Although Amazon plans to expand AmazonFresh slowly and methodically (so as to avoid the perils of Webvan), and industry experts argue there is room for multiple grocery delivery formats to succeed, there are a number of startups in the food tech ecosystem that may become obsolete when AmazonFresh comes to town.

Speaking of Webvan, this Reuters article by Alistair Barr is definitely worth a read to understand how deeply Amazon has analyzed the failures of Webvan. Although there are many nuances, it boils down to three key lessons: “expand slowly, limit delivery to areas with a high concentration of potential customers, and focus relentlessly on warehouse efficiency.” Interestingly, the warehouse efficiency component is aided by the recent acquisition of Kiva Systems, which was founded by a former Webvan executive who figured out what it takes to make the picking and packing process economically viable.

EMN8 Acquires Snapfinger. The San Diego-based maker of digital ordering and engagement platforms for fast food restaurants acquired Georgia-based Snapfinger, an online/mobile ordering platform for casual dining restaurants. The newly combined company, which plans to debut a new name, will count over 40 multi-unit restaurant chains as customers and offer multichannel ordering and customer engagement products/services across six major channels including kiosk, online, mobile, call center, tablet and group ordering. The core leadership team from Snapfinger is joining the EMN8 executive team. The acquisition was announced in conjunction with a $51.5m raise, which is covered in the Funding section below.

Twitter Acquires Spindle.  The personalized local discovery app sifts through the torrent of data streaming through the social Web (including Twitter), and delivers local points of interest like restaurants or stores based on users’ tweets, location and time of day. Although Twitter will shutter the service, All Things D notes “Twitter may focus that talent on fleshing out local discovery features to add,” which could be a rival to Foursquare, Facebook’s local search or the new Google+ location sharing feature in Maps (Google recently decided to shutter two of it geo-location apps: Latitude and Alfred, which was acquired in 2011 and described as “Pandora for the real world” but mostly focused on restaurant discovery).

OpenTable Acquires JustChalo. With OpenTable’s second mobile-focused acquisition this year (after its acquisition of Foodspotting in January), this acquisition appears to be a talent grab for the mobile development team, to improve its existing mobile experience for diners and its restaurant customers. The Mumbai-based mobile tech firm reportedly was in the process of developing a US-focused mobile payments app called Chalo, however it hadn’t launched by the time of the acquisition.

Delivery.com Acquires Key Assets of Brinkmat.  While the acquisition itself is not in the food category – Brinkmat’s e-commerce platform offered free local pick-up and delivery of laundry, dry cleaning and tailoring – it is relevant to highlight that Delivery.com’s growth strategy will now look beyond the local restaurant and grocery verticals in order to leverage their platform for a variety of local merchants. As TechCrunch notes, the local delivery space is hot right now, with “giants such as Google Shopping Express, eBay same day deliveries, and of course Amazon, as well as startups such as Postmates, TaskRabbit, and Exec” crowding the ecosystem, thus we can expect “more acquisitions could be in Delivery.com’s future as it looks to continue to expand either its vertical reach or tech offerings.”

Clinkle Raises $25m. This new SF-based mobile payments start-up has been beta testing its digital wallet app across college campuses and aims to “overcome the inertia preventing people from using their mobile phones as wallets,” expecting to release its platform this upcoming year. A number of investors with serious technology industry pedigrees participated in the round, and the company plans to use the proceeds to grow its team and ensure the continued quality of its products.

EMN8 Raises $51.5m. In addition to the Snapfinger acquisition (described in the M&A section above), the restaurant ordering, payment and loyalty platform will use the proceeds to expand its ordering and one-to-one marketing platform and accelerate growth domestically and internationally. EMN8’s current customers include Burger King, Domino’s, CKE, The Counter, Yum Brands India, while Snapfinger’s clients include Subway, Outback and California Pizza Kitchen. The raise appears to be a combination of debt and equity.

Revel Systems Raises $10.1m. The company’s iOS-based mobile POS system includes integrated payroll, inventory tracking, customer relationship management and additional features for restaurant, grocery and retail businesses. Given that the company became profitable at the end of 2012, the new round of funding will accelerate Revel System’s ongoing international and domestic expansion of its software, and allow the team to open new offices in Asia, Australia and Europe to support the international efforts.

MyWebGrocer Raises$154m.  The Vermont-based SaaS provider of e-commerce and marketing solutions for grocery stores and global CPG companies took in a growth equity investment from middle-market investor HGGC, with Stripes Group selling its full stake in the transaction. MyWebGrocer’s grocery store ad network includes over 140 grocery brands, including Albertsons and Kroger, which enables the company to run digital marketing campaigns for over 200 CPG brands. As Dan Primak at Term Sheet points out, this may signal continued consolidation in this space as most of HGGC’s deals “are viewed as ‘platforms,’ which often means subsequent acquisitions.” The HGGC press release adds some color as to where they think the opportunity lies, stating, “we believe that grocers will increasingly look to MyWebGrocer to provide the technology platform that enables consumers to plan and shop online, as well as enhance the in-store experience with mobile and social offerings.”

RunKeeper partners witt MyFitnessPal partner to merge exercise and dietary data. After launching its first API in October 2012, MyFitnessPal has added RunKeeper to its list of integrated apps (joining Fitbit, Runtastic, Endomondo and Withings among others.). The partnership means that users of RunKeeper and MyFitnessPal can easily connect the two services and automatically see their RunKeeper fitness activity on MyFitnessPal, and vice versa with calorie data on Runkeeper.

Food on the Table Partners with Mom365 to launch Mom365 Meals, a mobile and website app for busy new moms. This partnership is an example of Food on the Table’s new platform licensing program, where the Company provides a white label recipe, meal planning and coupon platform to digital publishers which allows Food on the Table to leverage the audience of existing digital communities.

Locu and Go Daddy partner, dramatically expanding Locu’s local data network and menu distribution platform. The partnership adds Locu’s menu widget to GoDaddy’s “Website Builder” allowing users to create an account with Locu without leaving GoDaddy’s workflow. PandoDaily explains the motives behind the partnership well, noting it “should dramatically accelerate Locu’s growth, although at the very long-tail end of the market.” And as Street Fight points out, it will “position the company to grow its network, and subsequently improve its pitch to publishers, without hiring a single salesperson.”

GrubHub to integrate its online ordering platform into SinglePlatform menus, and will add SinglePlatform menus to its AllMenus.com website and database. This partnership makes a ton of sense, as it will increase the chance for both companies to capture revenue during a moment of high purchase intent. Due to increased SEO through the combined menu distribution network, restaurants listed through SinglePlatform are now more likely to show up in online searches, and the easy integration with GrubHub’s ordering system will increase the likelihood of customers choosing GrubHub over other online ordering providers. (Catching customers at this precise moment is also on the mind of Yelp, as a partnership with Delivery.com and Eat24 was just announced to integrate ordering/payment within the Yelp interface.)