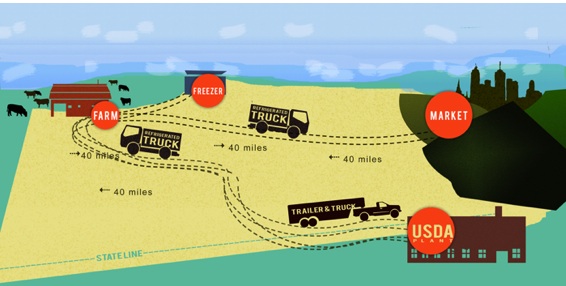 [This article is part of a series of Food+Tech Connect 2011 Trend Reports.  Others in the series include Recipe Websites, Apps & Publishing and Where Does Your Food Come From?]

According to a UC Davis Report, demand for organic and grass-fed beef is on the rise.  But these niche meats still only make up a mere 2% of beef sales in supermarkets across the country. To Food+Tech Connect, this means opportunity.

Over the course of the last year we featured articles discussing many of the gaps technology can fill in meat production, processing and distribution. In this end of the year wrap-up, we look back on those discoveries and opportunities.

Why does meat need tech help?

“The question is, do you really want to be a rancher, or do you want to be a meat company,” said Loren Poncia of Stemple Creek, a 1000 acre ranch in Marin, California. “I love when a customer tells me, ‘that was the best meat I have ever had.’ But I don’t love the logistics it takes to get it to them.”

Poncia is referring to the amazing amount of work it takes small-scale ranchers like him to get their meat from farm to plate. But we believe technology can help, if it takes into account the reasons why Poncia and other small scale producers have so many logistics to deal with.

In other words, challenges for ranchers occur on-farm, in weak distribution networks, and in educating the public.  Technology can help on each of these fronts.

“Grass-fed” in the store translates to good pasture management on the ranch.  That means ranchers spend a lot of time and labor constantly moving cows, and fences, to keep pasture healthy.  A team in Australia is working on a virtual fencing concept for cows that would use GPS to define pasture areas and ear tags to alert cows of the boundaries.  Teams in Europe and Israel are also using GPS to track provenance and production levels of dairy cows.

Opportunities: While ranchers in the U.S. are interested in the technology, no one is currently working on these tools for small scale producers in the U.S. however.  Sensors could also be used to provide information about the nutrient content of pastures, to alert ranchers if cows are ill, and could be used to help track and organize data about herd lineage and on-farm practices, which could in turn be made available to consumers.

“I think we can take advantage of social networking to spread the gospel of good meat and to educate people about food,” said Bill Niman in his answer to the question “how can information and technology be used to hack the food system?”  Niman, and many others, envision technology being used to clarify the confusion in the marketplace surrounding meat and terms like “natural,” “sustainable,” and “vegetarian fed.” 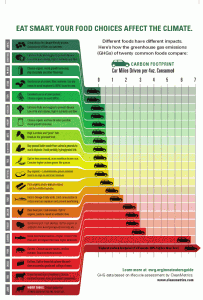 Opportunities: In this vein, the Environmental Working Group (EWG) created a “Meat Eaters Guide” to help consumers sort out the carbon footprint of different kinds of protein.  And while the information in the guide could be turned into a useful app, Lisa Frack of EWG imagines adding an even more powerful element. “The minute a consumer decides not to buy a product, the app could enable the person to send that information to the company telling them they lost the sale,” says Frack. “Companies could then see what people are not buying, and we could communicate more easily to them about what we don’t want to buy.”

While Frack’s idea still does not exist, several other interesting consumer tools did arrive on the scene in 2011.  Blind Mice Studios created Ask The Butcher and the “first grilling/cooking thermometer and app for iPod touch, iPhone and iPad” was developed.  A series of butchery videos by Farmrun allows viewers to butcher their own hog, and meatlessly.com assists meat eaters in taking one day a week off for Meatless Mondays.  The Butcher’s Guild also went live this year, bringing important information about the industry to butchers and consumers alike.

Yet while more apps and tools for consumers were developed, little headway was made to help with the sizable distribution logistics Loren Poncia of Stemple Creek hates.

“There is definitely the feeling that one is building the food system oneself—one sale at a time,” wrote Ulla Kjarval of Spring Lake Farms which raises beef, lamb and pork.

Kjarval envisions a website to “help facilitate relationships between buyers and farmers, help with inventory, nurture farmer knowledge, and most importantly, connect farmers with those interested in buying their product.  An active marketplace, but a digital one, where farmers can sell their goods, and buyers can make educated decisions based on transparency and an active social community.” 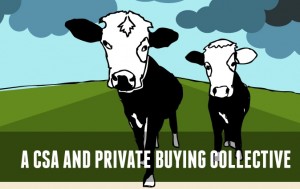 Thus far, few online resources exist to help Kjarval.  Buying clubs and CSAs like Pastoral Plate, the Belcampo Meat-Up, and NYC Meatshare allow ranchers to direct-sell whole animals to fewer customers, thereby limiting the amount of time they have to spend on sales and the amount of meat wasted. But these groups focus solely on the consumer end and are made for assisting only very small groups of people.

Opportunities: In fact, few have attempted to tackle the logistics of small farm meat distribution, processing or shipping even though it remains arguably the biggest roadblock in bringing small-scale produced meat to the marketplace.  And as a generation brought up with social media and smart phone technologies begins to ownrestaurants, farms and shops, it is an opportunity waiting to happen.

What 2011 did bring, however, is more interest in the ways technology can help make small scale meat production cost efficient and available to the public.

“The grass-fed beef, and pasture-raised livestock more broadly, is a huge opportunity for capital investment,” commented Ali Partovi in September to Food+Tech Connect’s Danielle Gould.  “The market is not developing as fast as it should because there’s not enough capital flowing into it.”

That capital could clearly go toward the development of technology to help ranchers and consumers connect directly, while providing more transparency.  Likewise, apps geared toward teaching the public more about meat could also be improved.  With interest in sustainable beef growing steadily, it seems the technology cannot be far behind.