Meat #5: Are Grazing by GPS & Virtual Fencing on the Horizon?

[Editors Note: This is the fifth story in a series about meat distribution. Food + Tech Connect has run these stories every Monday for the past few weeks.] 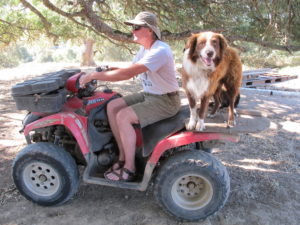 Mac Magruder out checking his cattle.

If Mac Magruder had his way, he would be able to control the grazing of his grass-fed herd by GPS.  And while the technology for such a virtual fence is on the drawing board, Magruder might have to wait a while to use it on his own cattle.

Magruder is one of the pioneers of “grass-fed” beef, chosen by Alice Waters and Chez Panisse to be the first pasture raised and finished meat served at the restaurant in 1996. And while he loves raising his cows on open pasture, he hates moving fences every few days to do it.

One of the main principals of raising purely grass-feed beef is pasture management. Ranchers like Magruder keep cows in small pastures and rotate them often from field to field to protect the land from being over grazed, eroded, and, well, over-pooped.

But that takes a lot of electric fencing to keep cows at bay, and is a time-consuming, labor intensive hassle.  Fences also restrict the movement of other animals living in the area, like the deer who often get caught in live electric fences, typically destroying the fencing and shocking themselves unnecessarily. And fences are likewise unsightly and costly, making them undesirable in places like regional parks where cows and people live side by side, but could be used to preserve trails, creeks, and wetlands. 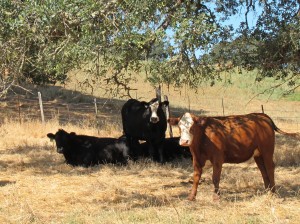 Magruder is not the first rancher to dream of virtual fencing for cows, but there is still no commercial product for sale quite yet.  A team of Australian researchers is currently working on the idea, but found powering the collars to be their the biggest challenge.  Kinetic and solar devices are being tried.

Additionally, Europeans are interested in using GPS collars to track the “mobility, provenance, and state of beef cattle.”  The idea is that GPS tracing of cattle would help create data on the origin and production of the beef, “as well as the environmental conditions of the territory where the cattle are based.”  No longer could “pasture raised” or “natural” beef be called such without a tag to prove it.

In the meantime however Magruder will just have to move fences day after day.

About the Author
Beth Hoffman has reported on food and agriculture for ten years, airing on NPR, The World, Latino USA, Living on Earth, KUER and KALW , and studied the food system in depth as a fellow and co-lecturer in the Africa Reporting Project at UC Berkeley’s School of Journalism. Hoffman competed a year long documentary project cooking with immigrant women in their homes, has traveled to India, Uganda and Ethiopia to report on rice production and chicken farming, and did a multipart series for KUER on the artistic, cultural and environmental connections we have to food. In addition to spending many hours on-farm in Utah, California and abroad, Hoffman also married into an Iowa farm family and is currently working with her husband to slowly convert the land into a sustainable orchard and hog farm. She currently lives in Albany, California. Hoffman’s previous work can be found on her website at bethaudio.com.
Previous Next
ag-tech, agriculture, data, food safety, Food Safety / Traceability, food tech, GPS, grass-fed, grass-fed beef, Mac Magruder, Magruder Ranch, Mapping, meat, pasture raised, Researchers, Technologists, traceability, virtual fencing