2011 Trends: Where Does Your Food Come From? 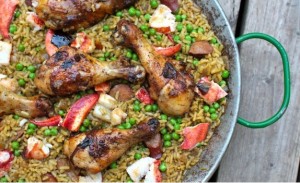 [This article is part of a series of Food+Tech Connect 2011 Trend Reports.  Others in the series include Recipe Websites, Apps & Publishing and Meaty Opportunities for Tech]

Fueled by food recalls of everything from cantaloupe to ground beef, the public is now calling for more, and more easily accessible, information about the food they eat.

In fact, 86% of shoppers say the presence of local food – food they believe is healthier, safer and more easily traceable – is important to them when choosing where to shop.  The global food safety testing market is also expected to grow into a $2.5 billion industry by in 2015.

In large part, the demand for traceability will be realized through technology.  Initially led by industry leaders like IBM and Microsoft, the move to track more complex data and to make it accessible to consumers via the web and smart phones is now being pioneered by private companies and university groups alike.

Food+Tech Connect reflects on the tech advancements of the last year and will continue following this trend over the course of 2012.

IBM announced several technological innovations to track food as it travels through the food supply chain.  In partnership with Cherry Central, data is now collected as fruit travels from processing plant to store and restaurant, and contains more food quality and compliance information than was previously available. IBM also recently won a contract to work with Shandong Commercial in China to implement a food monitoring system for use in the pork industry.

But this technology is created for vertically integrated systems, while much of the food we eat comes from multiple sources and travels through many hands.

The Whole Chain Traceability Consortium (WCTC) is working to allow “consumers to point a smart phone at a food product bar code, and retrieve a global sourcing map [created by Source Map] and reliable information about all the steps a product took from the farm to the store,” said Steve Holcombe of Pardalis, Inc.  In an interview with Food+Tech Connect, Holcombe and Professors Dr. Brian Adam and Dr. Michael Buser of Oklahoma State, explained that much of the problem lies in fragmented food supply chains where many different companies are buying and selling the product.

“For example, the U.S. beef industry is a fragmented supply chain in which the product goes through many hands and changes form many times,” said professor Brian Adam of Oklahoma State. “Consumers are increasingly seeking access to real-time, trustworthy information about where in the world a product comes from, whether it was raised in a sustainable fashion, whether it is safe to eat or use, etc. And industry stakeholders are beginning to realize that such consumer access can positively affect their bottom line profits.

Transparency is Good for Consumers and Industry

The U.S. Government agrees such transparency would be a good thing.

The National Research Council released a report in November stating that “publicly posting enforcement and testing data…on the Internet could have substantial benefits, including the potential to favorably impact public health.”

The report looked at data already collected by the U.S. Department of Agriculture’s Food Safety and Inspection Service (FSIS) on meat, poultry and eggs.  It found the benefit of releasing such data would “include enabling users to make more informed choices, motivating facilities to improve their performance, and allowing research studies of regulatory effectiveness and other performance-related issues.”

One tool to improve safety and transparency on small farms, for free, is the new On-Farm Food Safety Project developed by the nonprofit FamilyFarmed.org with lead funding from the USDA Risk Management Agency. Large buyers including Compass Group, Sysco, and Chipotle Mexican Grill also supported the project financially and with technical assistance.

“USDA believes that a strong farm safety net-including effective, market-based risk solutions for producers of all variety and size-is crucial to sustain the vitality of American agriculture,” said Kathleen Merrigan, Deputy Secretary of Agriculture on FamilyFarmed.org

SourceMap is another such free tool.  Anyone, anywhere can enter information into the website and create a supply chain map, detailing information about companies and their products.  The map also automatically generates information on distances between locations and the carbon footprint of travel.

“Crowdsourcing is the most expedient way for us to collect sourcing data and make it available to consumers,” says Leonardo Bonanni PhD, Sourcemap CEO.  “Initially researchers and students were curious about their environmental impact.  Then small businesses started using Source Map to show their care in sourcing, and now, large companies are approaching us to see what the can do with our tools.” 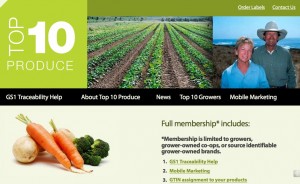 Food+Tech Connect also featured various visions of a more transparent food chain in our Hacking the Food System series.  Melanie Chang wrote of the Produce Traceability Initiative which plans to use Global Trade Item Numbers to trace food through the system.  John Bailey wrote about the “interoperability” of data systems, and how groups like ShopSavvy and Top10 Produce are also using bar codes to bring traceability to the food system.  By assigning a single number to farmer, farm and product, Bailey’s group confirmed that consumers are willing to pay up to 30% more for food that is traceable to that which is not.

Lastly, Real Time Farms’ Karl and Cara Rosaen wrote about the importance of using technology to make it easy to know where you food comes from and find food you feel good about eating.“This is a massive but possible undertaking, if we work together,” wrote the Rosaen’s.

“It requires the constant gathering, cleaning, and sharing of data on all of our nations farms; their growing practices and stories. If we can all share data, we can move, aggregate, and share data seamlessly between farm management systems (like AgSquared), CSA-management systems (like LocalHarvest’s CSAware), traceability software (such as HarvestMark and Top10Produce), food hub distribution software (such as LocalOrb.it), online food distribution systems (like LocalDirt or Farmigo) and consumer facing educational tools, like Food Tree and RealTimeFarms.”

Finally, Fair Trade USA’s decision to break away from Fair Trade International and to water down the standards for what is considered “fair trade” made big news in 2011.  Claiming the label will now help more farmers in the field, many are unhappy with the idea that the label will now mean less than it has.

The decision is surprising after the certification’s announcement that they will be partnering with Good World Solutions to ensure better communication with workers and farmers.

Traceability and food provenance will be main issues in 2012, and Food+Tech Connect will be following the trend.

About the Author
Beth Hoffman has reported on food and agriculture for ten years, airing on NPR, The World, Latino USA, Living on Earth, KUER and KALW , and studied the food system in depth as a fellow and co-lecturer in the Africa Reporting Project at UC Berkeley’s School of Journalism. Hoffman competed a year long documentary project cooking with immigrant women in their homes, has traveled to India, Uganda and Ethiopia to report on rice production and chicken farming, and did a multipart series for KUER on the artistic, cultural and environmental connections we have to food. In addition to spending many hours on-farm in Utah, California and abroad, Hoffman also married into an Iowa farm family and is currently working with her husband to slowly convert the land into a sustainable orchard and hog farm. She currently lives in Albany, California. Hoffman’s previous work can be found on her website at bethaudio.com.
Previous Next
Ag Squared, Cara and Karl Rosaen, Chipolte, Compass Group, CSAware, Fair Trade, Family Farmed, Farmigo, food safety, Food Safety and Inspection Service, food traceability, food tree, Good World Solutions, Harvest Mark, IBM, John Bailey, Kathleen Merrigan, Local Dirt, local orbit, meat, Melanie Chang, On-Farm Safety Project, Produce Traceability Initiative, real time farms, Shop Savvy, Sysco, The Whole Chain Traceability Consortium, Tools, Top 10 Produce, Trends, trends, USDA