Surveys of Chefs and Consumers Find Technology Use, But More Info is Needed [Survey] 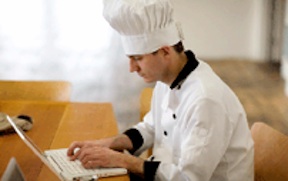 Two interesting surveys about technology use in restaurants predict trends for 2012.  But the specifics of those trends seem to be lacking, and to find out more, Food+Tech Connect has created a quick survey below.

The National Restaurant Association, in partnership with the American Culinary Federation, surveyed 1,800 chefs at the end of 2011.  Chef’s Survey: What’s Hot In 2012 asked chefs to rank 223 “foods, beverages, cuisines and culinary themes” as to the most important trends for the coming year (local and sustainable foods ranked at the top of the list).  The Association also asked chefs about their technology use:

“What is the hottest technology trend in restaurants for 2012?”

These numbers, however, seem to leave out perhaps the largest consumer-facing technology regarding restaurants.  Where People Get Information about Restaurants and Local Businesses, a Pew Research Center’s Project for Excellence in Journalism study, found “people looking for information about local restaurants and other businesses say they rely on the internet, especially search engines, ahead of any other source.”

Some of Pew’s findings:

Some 55% of adults say they get news and information about local restaurants, bars, and clubs.  When they seek such information, here are the sources they say they rely on most:

Additionally, the study found those who sought out information about local businesses and restaurants are households which typically make $75,000 and have college educations.  Women and young adults are also more likely to look for information on restaurants.

Comparing the two surveys creates a confusing portrait.  16 percent of chefs say social media is the “hottest trend” in technology, while only 1.5 percent of consumers say they are using twitter or social media to get information about restaurants (3% of 51%).  Perhaps not enough chefs are using twitter or facebook, or the format is not well suited to learning about restaurant.

Pew also found about 28 percent of the population (51% of 55%) is using the internet to find information about restaurants.  This number is not reflected in the chef survey; about 25 percent of chefs said smart phone apps and tablet use is a “hot” trend, but the question, and answer, are vague.  While perhaps simply a semantic difference of listing information as “menus and wine lists on tablets” or “news and information about restaurants,” the difference is an important one for both chefs and entrepreneurs attempting to connect owners and consumers in the restaurant space.

In other words, it feels like more information is needed as to how people are using the web to connect with restaurants, and in what ways they are doing so.  To this end, we created the survey below consisting of 5 simple questions. We will report the findings in the coming weeks.

[Sign up for Food+Tech Connect Bytes to have stories like this one come directly to your inbox.]

About the Author
Beth Hoffman has reported on food and agriculture for ten years, airing on NPR, The World, Latino USA, Living on Earth, KUER and KALW , and studied the food system in depth as a fellow and co-lecturer in the Africa Reporting Project at UC Berkeley’s School of Journalism. Hoffman competed a year long documentary project cooking with immigrant women in their homes, has traveled to India, Uganda and Ethiopia to report on rice production and chicken farming, and did a multipart series for KUER on the artistic, cultural and environmental connections we have to food. In addition to spending many hours on-farm in Utah, California and abroad, Hoffman also married into an Iowa farm family and is currently working with her husband to slowly convert the land into a sustainable orchard and hog farm. She currently lives in Albany, California. Hoffman’s previous work can be found on her website at bethaudio.com.
Previous Next
american culinary federation, facebook, food startup, food startups, food tech, food tech connect, food tech startup, food trends, local food, local sourcing, national restaurant association, opentable, Pew Center for Excellence in Journalism, restaurants, restaurants and social media, survey, technology use, Trends, trends, twitter, Yelp