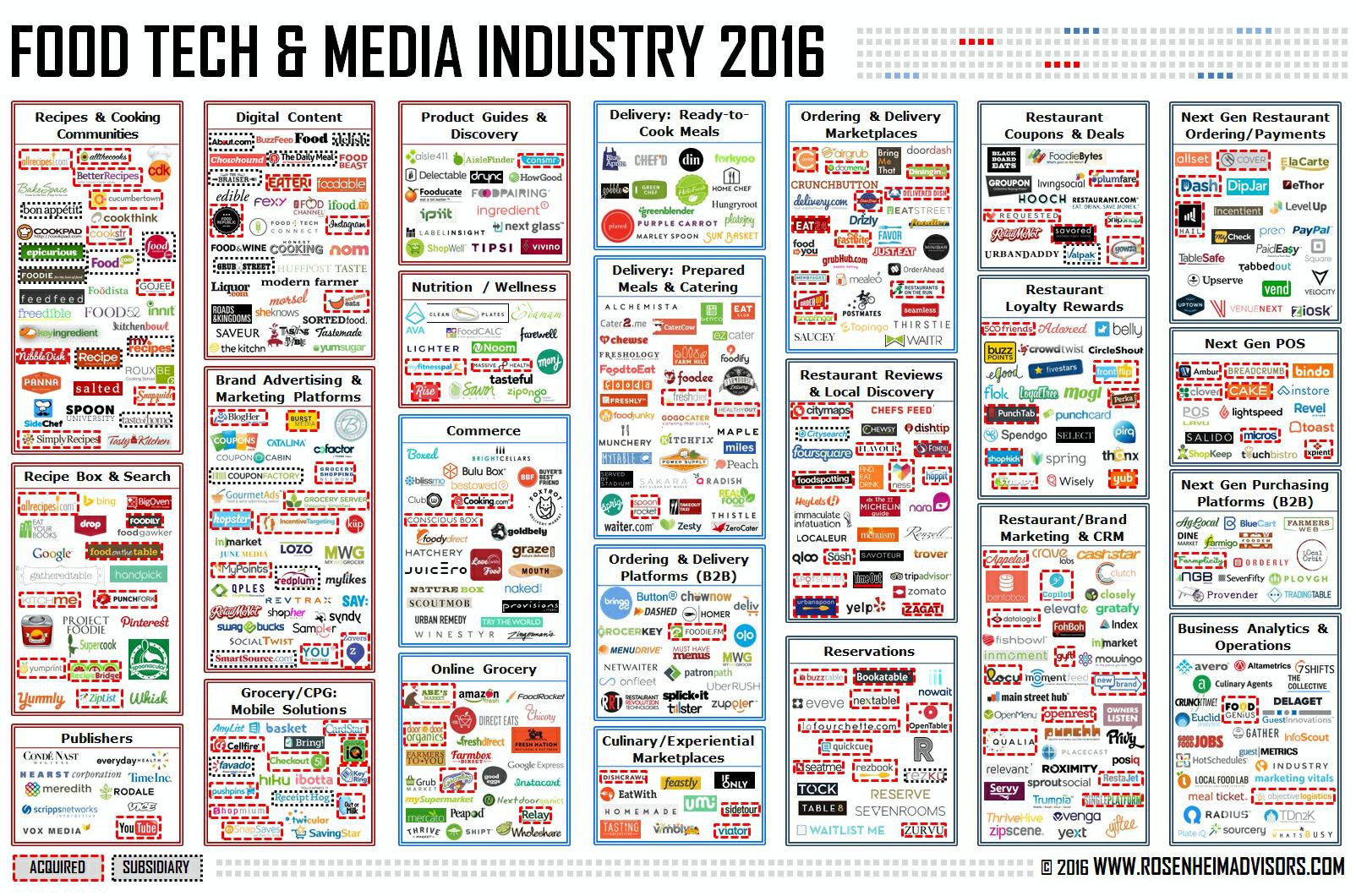 This is a monthly guest post written by consulting firm Rosenheim Advisors; it highlights the most interesting acquisitions, financings and partnerships within the Food Tech & Media ecosystem – digital content, social, local, mobile, grocery, e-commerce, delivery, ordering, payments, marketing and analytics – to give you insights into the latest funding and growth trends.

The food tech ecosystem brought in over $665 million of capital in September, with a little over half attributed to the IPO of Dutch food delivery marketplace Takeaway.com. There were 17 private companies who announced funding during the month, raising close to $300 million in total private capital, half of which were U.S.-based. Within this, Fresh Direct’s private equity infusion of $189 million was the largest raise during the month.

With six relatively early stage deals announced in September, M&A activity was a bit light but notably international as nearly every acquisition announced took place outside the U.S. Among the larger strategics, Just Eat and Zomato were active acquirers during the month as well as iZettle, a fast-growing mobile payments and POS startup.

While meal delivery, meal kits and grocery continue to be well-represented categories, there was a lot of activity among SaaS-based restaurant ops players, both on the M&A front as well as funding. Top themes included business automation, reservations and point of sale solutions.

Zomato Acquires Sparse Labs. The Guragon, India-based delivery monitoring technology will allow Zomato to enhance its delivery technology.  Sparse Labs technology allows both the company and customer to view the location and progress of a delivery in real time via mobile app. Zomato will incorporate this technology into its meal delivery services, which rely on individual restaurant’s own delivery teams to complete their orders. With the acquisition, Sparse Labs will become Zomato Trace.

U-Feast Acquires Pass the Table. As a competitor to U-Feast which offers exclusive weekly “feasts” at different area restaurants, Pass the Table allows consumers to customize their menu and food experience at restaurants. Pass the Table will bring U-Feast 2,000 new customers. With the acquisition, the co-founders of Pass the Table will join U-Feast as a chief experience officer and a member of the board of directors. According to Betakit, in the coming year U-Feast plans to launch a new user interface focusing on “customization and building out its data analytics engine to better target customers”.

iZettle Acquires intelligentpos. The Edinburgh, UK-based cloud-based point of sale system will enhance iZettle’s mobile point of sale system by integrating advanced features such as stock and table management. According to TechCrunch, intelligentpos, which has been a partner to iZettle for three years, will add another €500 million in processing volume to the €3 billion that iZettle already processes annually. TechCrunch also notes that this may be just the beginning of an acquisition spree for iZettle as the company is company is “looking to go beyond its original payment roots as a route to more recurring revenue and a wider customer base”.

Just Eat Acquires Partial Assets of Tok Tok Tok. The France-based shopping and delivery service, which operates similarly to Postmates, will provide Just Eat with logistics technology to further manage restaurant delivery drivers. According to TechCrunch, the company had been “on its last legs for a while now”, and with the sale of the assets will be shutting down.

Revel Systems Acquires iqPOSitive. The Russian developer of cloud-based automation solutions for restaurant businesses offers tablet-based solutions for a range of process including checkout, employee schedule and inventory management. The transaction reportedly took place in May, with iqPOSitive now operating as a subsidiary of Revel Systems.

Takeaway.com Raises $368m in IPO. The Amsterdam, Netherlands-based online meal delivery service allows consumers to order meals from restaurants for on-demand delivery. Takeaway provides restaurants with an online ordering platform, and the meals are delivered by restaurants’ own delivery services. Takeaway operates in Europe and parts of Asia. As TechCrunch notes, Takeaway.com priced its shares at €23 each ($25.82), giving the company an enterprise value of around €849 million ($952 million) and a market cap of around €993 million ($1.1 billion).

Home Chef Raises $40m. The Chicago, IL-based meal kit delivery service offers a menu of recipe kits updated weekly. Kits include prepared ingredients and directions and can be customized with add-ons including breakfast and fruit baskets. Home Chef has distribution centers in Chicago, Los Angeles, and Atlanta and ships kits throughout the United States. The company delivers over 1.5 million meal kits per month, and has recently increased its team to 600. The investment will be used for growth.

VMO Raises Undisclosed Funding. The Kuala Lumpur, Malaysia-based platform for event scheduling allows customers to book venues for events for free. VMO offers over 650 venues and services, and 20% of those may be booked instantly online. Strategic investor, Rhombus Food, operates popular eateries in Malaysia and saw a stream of bookings to their restaurants from VMO, which led to the funding. VMO plans to use the investment to expand in Malaysia.

Fresh Direct Raises $189m. The Long Island City, NY-based grocery delivery service has grown to $600 million in revenue and has been profitable since 2010. In addition to its core order-ahead service, Fresh Direct also operates FoodKick, which delivers food in an hour. Fresh Direct currently operates in New York, New Jersey, Pennsylvania, Connecticut, and Delaware. The investment will be used for “manufacturing capacity” and expansion to “new geographies.” According to Reuters, the CEO has said it is ‘too early’ to comment on potential plans for either an initial public offering or a sale to a larger competitor.

Chef’s Plate Raises $6m. The Toronto, Canada-based meal kit delivery service allows consumers to select recipes they want to cook and delivers pre-portioned ingredients and directions. Recipe offerings are changed weekly, and each meal takes about 30 minutes to prepare once delivered. Chef’s Plate currently has distribution centers in Ontario and Vancouver. An estimated 200,000 kits are delivered each month, with sales increasing 10 percent week to week.

Brava Raises $12m. The Mountain View, CA-based domestic automation company specializing in food and kitchen experiences produces hardware and software to “simplify aspects of daily life”. Brava is currently working on a kitchen appliance, and according to TechCrunch, the product will be “for everyone” and “not a luxury item.” Brava plans to launch their first product sometime next year.

Allset Raises $2.35m. The San Francisco, CA-based mobile app allows restaurant patrons to book a table, order their meal, and pay in advance. The aim of the app is to decrease wait time and let consumers finish their restaurant experience in 30 minutes. Allset currently operates in San Francisco, Palo Alto, and Manhattan. It operates in over 180 restaurants and serves over 8,500 customers per month. The investment will be used for expansion to Los Angeles and Chicago, as well as product research, development, and marketing.

SmartBite Raises Undisclosed Funding. The Petaling Jaya, Malaysia-based food delivery service delivers lunches to working professionals. People who use the service get a text message each morning with a daily menu and reply with their choice of options to select their meal. Currently, SmartBite only offers lunch deliveries, but the company has plans to offer breakfast, snacks, and take-home dinners.

Swiggy Raises $15m. The Bangalore, India-based meal delivery service provides restaurant meals to consumers with on-demand delivery. Swiggy claims to have the fastest delivery rates in India, with an average time of 37 minutes. Swiggy currently operates in 8 cities, works with over 9000 restaurants, and processes over 40000 orders per day. The funding will be used to increase delivery efficiency, upgrade technology, and expand the number of restaurants.

FoodChéri raises $6.7m. The Paris, France-based online restaurant offers healthy meals prepared by chefs for delivery. Orders are taken in advance and on-demand, and meals are delivered ready to reheat. FoodCheri currently serves over 1,000 meals per day and operates in Paris and surrounding suburbs. The company will use the funding to expand in France, to increase its staff, and to develop.

Sourcery Raises $5m. The San Francisco, CA-based app allows restaurants to digitally manage orders, inventory, and costs. Restaurants can scan and upload invoices and receipts, and the Sourcery app will organize the information. Sourcery will use the funds to create an app feature that will allow vendors to send and track invoices and bill customers.

eBev raises $1.5m.  The Sydney, Australia-based online platform allows wholesale wine purchasers to manage their inventories and order directly from wine sellers. The platform includes 22,000 wines and is currently used by 700 venues. eBev aims to have 8,000 venues using the platform in the next year. The investment will be used to expand to Melbourne and other areas, as well as to expand services—including offering more wines and further developing customer relationship and payment tools.

Idea Chakki Raises Undisclosed Funding. The New Delhi, India-based mobile app works with restaurants to provide digital video menus and allow customers to gift food and beverages across the world. Currently Idea Chakki operates in six restaurants, and the company aims to expand to 30 restaurants by the end of this year. The funding will be used to expand to new locations, build the team, and advance technology.

VizEat Raises $4.3m. The Paris, France-based “social dining platform” allows travelers to eat a local, home-cooked meal in a home where they are visiting. In addition to meals, some VizEat hosts also offer cooking classes and food tours. To date, VizEat has over 20000 hosts in 110 countries. The funding will be used for growth, and VizEat plans to open offices in the UK and Germany, in addition to its current offices in France, Spain, and Italy.

DayBox Raises $600k. The New Delhi, India-based platform for fresh produce sales connects farms with restaurants and retailers. At present, over 30 farms and 50 restaurants use the platform. The funding will be used to grow the team, develop technology, and to expand to Bangalore and Mumbai.

EatStreet Partners with Pingup to allow consumers to order food directly from Yahoo and YP searches.