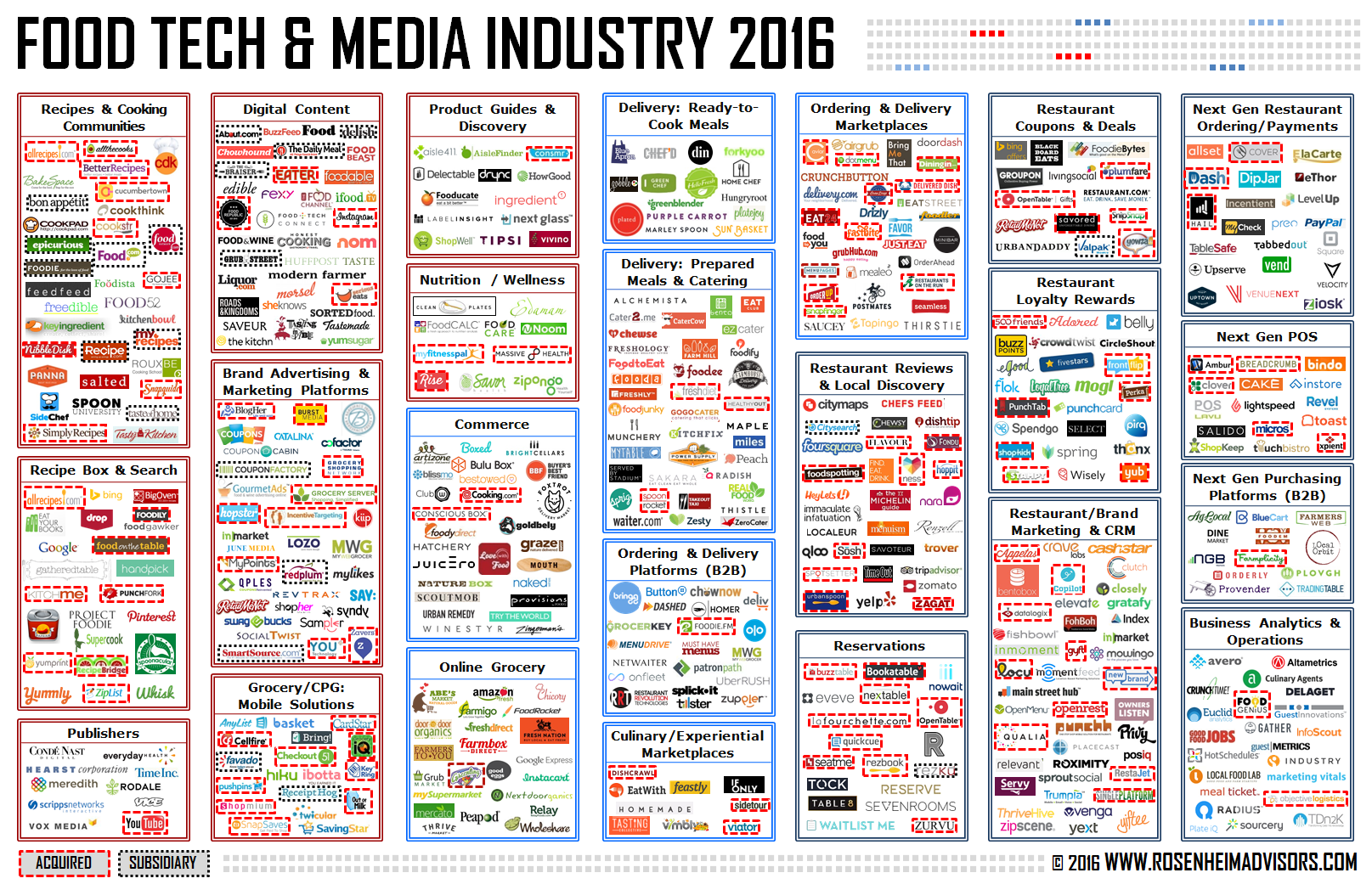 This is a monthly guest post, written by consulting firm Rosenheim Advisors, it highlights the most interesting acquisitions, financings and partnerships within the Food Tech & Media ecosystem – digital content, social, local, mobile, grocery, e-commerce, delivery, ordering, payments, marketing and analytics – to give you insights into the latest funding and growth trends.

Deal volume in May was in line with recent months, with six acquisitions and fifteen fundings, however deal sizes were significantly smaller as the total reported influx into the foodtech sector was just $155 million. In contrast to recent months where larger and later stage rounds represented a least a quarter of fundings, May was filled with a majority of Seed and Series A rounds and featured just one raise over $20 million.

Commerce and delivery were prominent sectors, with restaurant-related technology well-represented among the companies. Close to sixty percent of the capital went to U.S.-based companies, as was the largest acquisition (LAbite’s sale to Grubhub) a U.S.-based deal.

Most international activity was driven by Western Europe which is unusual, and surprisingly there was no activity in China aside from a distressed exit. Given the light representation in May, the surge in shuttering Indian foodtech startups appears to have quelled the funding gold rush (there was only one meaningful fundraise during the month within India).

Jialebao Acquires Yummly77. The Shanghai, China-based online grocery store sold fresh produce online for delivery and had received a Series B investment of $20 million from Amazon in 2014, but in April  2016, Yummy77.com suspended its operations due to its dire financial situation. The strategic assets will provide Jialebao, a Shanghai, China-based ecommerce group, with a strong brand and consumer base in addition to logistics, storage systems, and operations. With the acquisition, Jialebao aims to become a frontrunner in the market for fresh produce.

Byte Foods Acquires Pantry. The San Francisco, CA-based smart fridge kiosk will allow the San Rafael, CA-based provider of vending machines and meal delivery for businesses to expand their healthy food options in workplaces. To use a Pantry fridge, customers swipe their credit card to open the fridge and then take whichever item(s) they want. The fridge uses Radio Frequency ID to determine what has been removed and charge the customer.

ShopWings Merges with Grocery Butler. Grocery Butler, the Australia-based online grocery store and ShopWings, Rocket Internet’s online grocery platform will perform a merger of equals and combine operations under the name ShopWings. By merging, the companies will gain advances in technology and logistics as well as an increased client base. Members of both teams will remain with the merged company—Guillaume Ang, the current COO of ShopWings will become the CEO of the merged company, and Michael Parthenides, the current CEO of Grocery Butler will lead operations in Melbourne. ShopWings will operate in Sydney, Brisbane, and Melbourne. ShopWings originally launched in Germany, however due to lack of demand and cooperation from local retailers, shut German operations in July 2015.

Roadrunnr Acquires TinyOwl. The Mumbai, India-based mobile app for food delivery will provide the Kormangala, India-based delivery service with technology and data analytics as well as some team members of TinyOwl. For now, TinyOwl will continue operations in only 20 of its Mumbai locations, shutting down elsewhere, and will begin the transition to the merged company, which will be called Runnr when it launches.

Hooch Raises $950k. The New York, NY-based mobile app for a subscription-based program to receive cocktails at bars provides consumers with a free round of drinks each day at cocktail bars. Membership costs $9.99/month or $99/year and includes specially curated drinks menus at restaurants and bars. Hooch currently operates in New York City, Los Angeles, Austin, Dallas and Miami. The investment will be used to expand the company in the United States and internationally.

Nestor Raises $1m. The Paris, France-based meal delivery service delivers lunches to companies and working professionals. The company offers a starter, entrée, and dessert for €15, and everything is cooked by professional chefs at Nestor. Currently, Nestor delivers 1000 meals per week and is growing by 15% each week. The funds will be used for continued expansion in Paris.

Chef’d Raises $12.27m. The El Segundo, CA-based meal and recipe kit delivery service offers over 200 recipes for consumers to choose from, and recently partnered with the NY Times. Customers select meals and kits with recipes and prepared ingredients are delivered to their homes within 48 hours. The investment will be used for expansion.

7Shifts Raises $900k. The Saskatoon, Canada-based software producer provides restaurants with a platform for employee scheduling. Managers can use an app to evaluate and assign shifts to employees and employees can view their shifts and submit requests to managers. Currently, 7Shifts is used by over 1900 restaurants in North America, Scandinavia, the Middle East, and Australia. 7Shifts plans to use the investment to expand their sales team and to add new features to their app.

ResQ Raises $446k. The Helsinki, Finland-based meal club “rescues” leftover food from restaurants and bakeries that would otherwise be thrown away or not consumed. Customers can buy these foods for 40-70% discounted prices. Currently, ResQ has over 17,000 customers and over 150 provider partners. With the funding, ResQ has announced its expansion to 3 locations in Sweden.

Menu Next Door Raises $2m. The Brussels, Belgium-based platform for home-cooked meals connects local home-cooks with community members who wish to purchase a home-cooked meal, like an “AirBnB for food”. Customers can place a menu order a few days in advance and then pick up their meal from the cook’s home on the day of their order—the company has no delivery option. Menu Next Door currently operates in Brussels and Paris. To date, there are 900 cooks and 110,000 customers using Menu Next Door. With the investment, the company will expand to London.

Eatonomist Raises Seed Funding. The Guragon, India-based meal delivery service delivers sandwiches, desserts, and Indian foods to offices. Food preparation and delivery are both controlled by Eatonomist, and all meals produced by the company are “calorie-counted gourmet meals”. The company will use the investment to develop and launch their app.

Instabuggy Raises Undisclosed Funds. The Toronto, Canada-based grocery delivery service delivers groceries to consumers in under 1 hour following their order. Customers can pick which items they would like to buy and which stores they are interested in purchasing from. In addition, Instabuggy also delivers meals prepared by in-store chefs. The company plans to expand to the United States within the next year.

6SensorLabs Raises $9.2m. The San Francisco, CA-based technology company produces portable food sensors that can test food for allergens such as gluten, nuts, and milk. The first sensor tester, Nima, tests food for gluten content. Users put a small piece of their food into a disposable capsule and put the capsule inside the sensor. The sensor then displays results of the test. Funds will be used to further develop and sell sensors to detect peanut and milk content. The company will also change its name to Nima, the name of its first sensor.

Sun Basket Raises $7.1m. The San Francisco, CA-based healthy meal kit service delivers recipes and USDA-certified organic ingredients packaged and prepared for cooking. Recipes are designed by chef Justine Kelly and include options for those seeking vegetarian, paleo, gluten-free, and omnivore diets. Sun Basket will use the investment for expansion in the United States, an East Coast distribution center, and hiring. The company secured $4.5 million in funding in September 2015 and with this additional funding has closed its Series A round with a total of $11.6 million in capital.

Orderbird Raises $20m. The Berlin, Germany-based software producer provides restaurants with mobile point-of-sale solutions. The app can take and place orders, simply split bills, and create tax-authority-compliant reports. The investment includes a strategic investment from Metro Group, with the goal of improving digital solutions for restaurants. The funds will be used for expansion in Europe—including France—and for product development.

ReserveOut Raises $4.1m. The Amman, Jordan-based software producer provides restaurants with a technological system for reservations, table management, and customer databases. Restaurant customers can make table reservations through the ReserveOut mobile app at over 1000 restaurants in the Middle East. ReserveOut currently operates in Amman, Dubai, Beirut, Abu Dhabi, Doha, Jeddah, and Manama. With the investment, the company will expand operations to Saudi Arabia and Egypt. The investment will also be used to enhance the ReserveOut mobile app.

Winc Raises $17.5m. The Los Angeles, CA-based wine club (formerly known as Club W) offers consumers wines from around the world. Customers can receive personalized recommendations for wine based of their preferences and “palate profile.” Wines can be ordered online and also purchased in-person at restaurants.

Peapod Partners with Whisk to deliver groceries and ingredients directly from online recipes.

Instacart Partners with PlateJoy to deliver groceries for personal nutrition and health plans.

Drync Partners with Ebay to create and source ebay Wine, a website exclusively for buying wine.