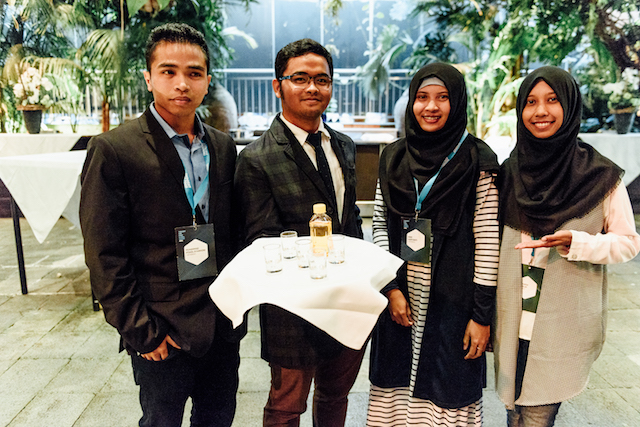 Our Millennial Innovators Uprooting Our Food System series profiles the bright, creative and driven university students from around the world that make up Thought For Food (TFF), a next generation food innovation platform (check out last year’s series here). A global community as well as a summit and business competition, TFF empowers breakthrough solutions to feed nine billion people by 2050. Throughout this series, we will highlight the work of the finalist teams from the 2015/16 TFF Challenge who are working to transform our food system.

Biteback is an Indonesian startup that wants to disrupt the $60B+ global palm oil industry with insects. The company creates cooking oil using insects, a method that is more environmentally friendly than producing palm oil, and richer in nutrients, due to its high iron levels. We spoke to Biteback’s founder and CEO Mush’ab Nursantio about the key benefits of the insect oil, what the future looks like for Biteback, and his experience being the runner-up in the TFF Challenge.

Thought For Food: What inspired you to launch Biteback?

Biteback: As a person who is passionate about agriculture and nature, it just made sense for me to work on something that I love without contradicting my values. In 2014, I found this report from the FAO about how insects could be the future of food security. At that time, I knew what I was going to do, especially since I already had experience in eating insects while living in Sulawesi, Indonesia, where sago worm, a type of beetle, is a delicacy.

We got the idea for Biteback when I decided to join the global student competition Thought For Food in October 2015. At the time, I knew that I would focus on insects for the competition, as I already had been growing mealworms in my house. Unfortunately, during this same period there were massive forest fires to clear the land for palm oil plantations, resulting in a haze crisis in Southeast Asia that lasted for months. I asked my friend Ifdhol Syawkoni, who had R&D experience in creating palm oil replacements, to join the competition with me. He later asked our other teammates, Musyaroh and Anik haryanti, to join Biteback.

TFF: What problem does Biteback help solve and how?

Biteback: We are working to reduce our dependency on palm oil, which is the key ingredient in 50% of all packaged items in the supermarket. It is the most used vegetable oil on the planet, accounting for 65% of all vegetable oil traded internationally. Indonesia is the largest producer of palm oil and has been clearing enormous amounts of rainforest for palm plantations.

TFF: How can insects be used to replace palm oil?

We are using Superworm (Zophobas morio) fats to produce the oil. I was interested in entomophagy since before starting this project, and have been farming insects myself. When we decided to create Biteback for TFF, we wanted to utilize insects to solve problems we face in Indonesia. We found that insects have healthy fatty acid properties, are rich in unsaturated fats and reproduce so rapidly that they outdo palm oil in both yield and efficiency — 150 tonnes/year can be produced in one hectare of land, compared to palm oil, which can only produce 4 tonnes/year  in the same area.

Insects are undeniably rich in iron — every 100g of superworms contains 3.93mg of iron. Their inclusion in the daily diet could improve iron levels and help prevent anaemia, which is the most prevalent nutrient deficiency in the world, according to WHO. Iron deficiency is affecting more than 2 billion people around the world. This is because there are only limited amount of iron source foods. Cooking oil is one of the most used food ingredients; it’s used to make food in home and is also in almost every packaged food. Creating an iron-rich cooking oil is an effective way to increase daily iron intake.

TFF: What is the biggest challenge you faced while developing Biteback, and how did you solve it?

Biteback: We thought the biggest challenge was consumer acceptance, but after demonstrating our products at some events and being featured on national TV programs and other media, we received a lot of much positive feedback from potential consumers. I think for now, the challenge is to produce enough insects, so we can deliver our product to market with a reasonable price.

We were recently selected to participate in the  Startupbootcamp FoodTech accelerator in Rome. This will allow us to shape and validate our business model, give us access to strategic partners, capital and the EU market. In the beginning, we are planning to sell our cooking oil as a premium product, since it’s still more expensive than other vegetable oil. Once we scale our production and reduce the cost significantly, we will try to reach the mass market in South East Asia, where insects are already consumed in daily basis.

TFF: What role do you see Biteback playing in global food security?

Biteback: Cooking oil is one of the most used ingredients on a daily basis, and ours is one that can be an additional source of iron. We are also developing insect oil applications beyond cooking oil.

Fats and oil are the main ingredients for preservatives in beverages, personal products, cosmetics, and biodiesel. Since palm oil is the most yield and cheapest vegetable oil in the market, it makes senses for these industries to use palm oil in their product. On the other hand, insect oil has 37x more yield than palm oil, so it can potentially become cheaper once it gets to an industrial scale. Fats in insects is only 20% of the total body mass. The other 80% still contains high amounts of protein that can be transformed into powder and used as ingredients in food or animal feed.

TFF: What was your experience like as a TFF Finalist, and how did that experience shape where Biteback is today?

Biteback: Being a TFF finalist was a life-changing experience. It allowed us to get exposed to a global audience and connect with impactful people in the Industry that we couldn’t get otherwise. For example, we met Steve Dauphin from the Kirchner Food Fellowship, who has been helping us develop our business model. The TFF community’s support and being surrounded by other innovators helped us to stay motivated to turn this idea into a reality.

TFF: What are your future plans for Biteback?

Biteback: For now our main focus is to scale our farming facility in order to get enough insects for production. We’ve been talking with some local government offices to possibly create a community empowerment program by selling farming kits to locals and then training them on how to grow the insects in a way that will fulfill our quality standard. By doing this, people can make additional income by growing insects and selling them back to us.

Sign up for the Thought For Food Challenge by October 31, 2016 – then finalize your teams and submit your bold business solution on feeding 9+ billion people by the year 2050. This year ten finalist teams have access to $25,000 in cash prizes + extensive in-kind support participate in the TFF Pre Accelerator and win a trip to the TFF Global Summit which will take place in Spring 2017.