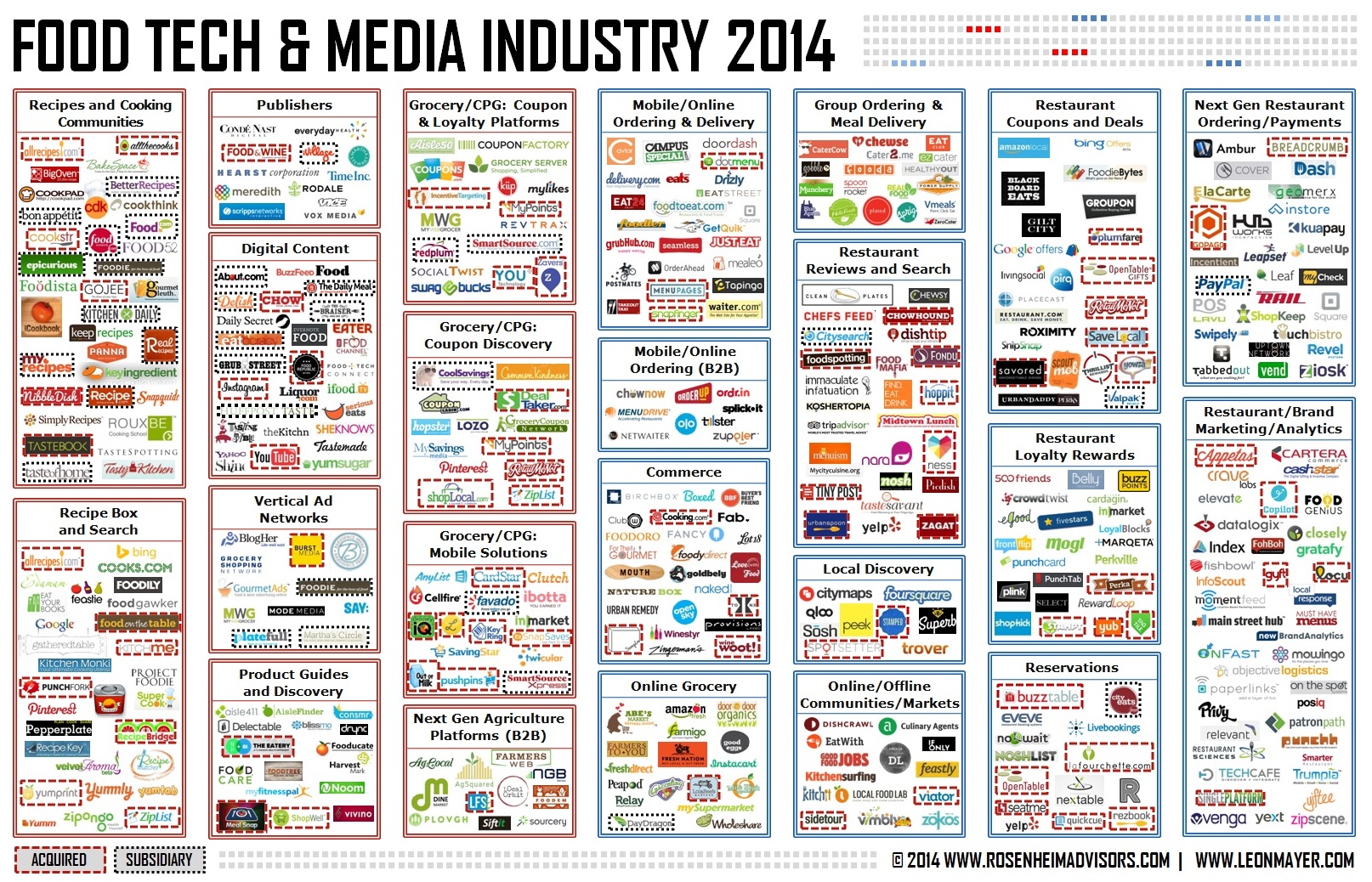 With six acquisitions and ten financings, the food tech and media sector was infused with close to $740m in July. A majority of the cash came from M&A ($664m), with private companies pulling in approximately $75m. Close to a third of all deals were for companies based outside of the U.S., and almost half of the funding announcements were for seed stage companies.

The “convenience economy,” while first coined in 2011, has increasingly been gaining traction across multiple industries and was a prevalent theme among most deals in this ecosystem in July. Rather than just the “Uberfication” of an industry, or the additional workforce/inventory of a sharing economy, the convenience economy casts a much wider net by generally transforming expensive luxury services (a one-to-one model) to affordable luxury services (one-to-many model). From personal shopping and delivery, to personal coaching and premium restaurant reservations, both investors and companies large and small are positioning themselves to capitalize on the consumer’s quest for affordable luxury.

TripAdvisor Acquires Viator. The San Francisco-based online tours and activities booking provider features more than 20,000 curated bookable tours and attractions and more than 600,000 reviews, photos, and videos submitted by travelers. Dennis Schaal at Skift notes that the acquisition “highlights the changing nature of travel booking, with the advent of mobile, as there will be a burgeoning emphasis on in-destination bookings with real-time availability.” He also point out that the timing of the acquisition announcement was notable as it was the day after the company’s second quarter earning call, in which plans to aggressively invest in the global expansion of its restaurant reservations business were the primary focus of growth (with CEO Stephen Kaufer labeling the restaurant opportunity as “phenomenal.”), and that tours and activities would take a back seat. The company will remain as a standalone site, and upon closing, Viator will be Tripadvisor’s fourth acquisition in 2014, following lafourchette, Tripbod, and Vacation Home Rentals.

JUST EAT Acquires Orogo. The London-based mobile ordering app allows users to place an order at restaurants, and pick up without needing wait in line. JUST EAT commented that the acquisition will enhance its services by increasing customer loyalty and satisfaction for restaurant partners, bolster high re-order rates, and speed up order processing. The company will continue to operate independently.

Square Acquires Caviar. The San Francisco-based high-end restaurant delivery service allows customers to order meals from restaurants that typically do not deliver, with Caviar-employed drivers serving as the delivery force. Square’s mobile payment devices are already in use at about 50,000 restaurants, and in May, Square replaced Square Wallet with Order, a new application that lets users order and pay for their meals via smartphone. The company sees Caviar as an additional service offering to help restaurants grow their business.

The Kroger Co. Acquires Vitacost.com. The publically-traded Boca Raton–based online retailer of healthy living products will enhance the technology expertise and add a platform for fulfilling home delivery of online orders for the $100 billion revenue grocery retailer. Vitacost.com’s e-commerce platform was a key acquisition incentive, as it includes ship-to-home orders in all 50 states, including 16 states not served by Kroger supermarkets. The deal is also expected to assist Kroger in gaining new U.S. and international sales, and will also serve as an additional channel for Kroger’s private label natural and organic foods, sold under the Simple Truth brand. Vitacost.com will operate as a Kroger subsidiary with existing management.

Zomato Acquires MenuMania. The New Zealand-based restaurant listing and review site will help the India-based Zomato quickly expand across New Zealand. Post the acquisition, the MenuMania site will eventually be rebranded as Zomato.co.nz to maintain a single identity. According to Quartz, Zomato plans to enter 22 new markets in the next two years, and is already in advanced acquisition talks with two companies in other geographies — one in Southeast Asia and another in Europe.

Resy Raises $2m. The New York-based restaurant reservations app allows users to pay a fee for a reservation at late notice, avoiding a wait. The company will initially launch its iOS and Android app in New York City with 20 participating restaurants.

Kurbo Health Raises $5.8m. The Palo-Alto-based maker of mobile tools for battling childhood obesity offers a comprehensive, evidence-backed system designed to empower and encourage kids to make healthier lifestyle choices. The system has three components: (1) the mobile app, which contains a food tracker, games, progress screens, videos and “Krunch” challenges; (2) virtual feedback and suggestions based on the foods tracked; and (3) live, expert coaching delivered via phone, video and text to give participants feedback, encouragement and recommendations. The company will use the funding to build out an Android version, in addition to hires in marketing and additional coaches.

Eat Club Raises $10m. The Palo Alto-based corporate lunch-delivery service allows employees to choose from 15 different options on any given day using its website or mobile app. According to re/code, corporate customers with 25 to 500 employees are the sweet spot, and they can choose to fully or partially subsidize the meal, or to make their own employees pay. The company also announced it has expanded to Los Angeles, and according to the company’s job postings, plans to expand to Seattle, Austin, Chicago, Boston, and Washington DC.

Jinn Raises $200K. The London-based local on-demand delivery app describes itself as an urban logistics and delivery platform, which allows users to order anything they want from local stores and restaurants. The company utilizes a network of professional couriers, and charges customer a £5.95 delivery fee plus 10 percent of the purchase. The funding will primarily be used for customer acquisition.

Cover Raises $5.5m. The New York-based mobile payments app allows restaurant patrons to “create a table” at an establishment, check-in with the restaurant to let them know they’re going to pay with Cover, and then automatically pay, split the bill if necessary, and leave a tip when they have finished. The company operates in over 100 restaurants in NYC and San Francisco, and will plan to use the funds to gain traction in the cities it already operates in.

Peachd Raises $2.75m. The Seattle-based food delivery startup delivers lunches from local restaurants to predetermined locations, currently operating in Seattle and Washington, D.C. The company will use the funding to grow the team and expand into new markets.

Elevate Research Raises $500k. The St. Paul, MN-based customer feedback platform app enables real time feedback, analytics and marketing automation for small and mid-sized restaurants. Elevate plans to use the funds to integrate with other software platforms, and fuel the expansion of its sales and marketing, with intentions of breaking into the hotel industry later this year.

RedMart Raises $23m. The Singapore-based online grocery retailer offers a wide range of products, with delivery available every day of the week; with the ability to let customers choose what time their order is delivered. The new capital will be used to build operational capacity to support future growth and expand the company’s product range to include fresh food.

Quandoo Raises $25m. The Berlin, Germany-based real-time restaurant reservation platform allows users to search for and book reservations at local restaurants, and allows restaurants to manage reservations, offer specials and take payments through its POS function. Launching its service in January 2013, the company has partnered with over 3,000 restaurants in eight countries and seated over 1.5 million diners. The company intends to use the funds to extend its market leadership in Germany, Austria and Italy across Europe as well as launching in APAC and Latin America.

Zomato partners with Bookatable. The partnership will make it easier for UK users to book restaurants.

Revel Systems iPad POS Introduces Yelp and Foursquare Dashboard for Restaurants and Retail. When a customer “checks in” with a social app like Foursquare or Facebook or leaves a review on Yelp, an icon will pop up on the Revel iPad POS merchant screen.

IBM has found a new partner for its supercomputer called Watson: Bon Appetit magazine. Together the companies  introduced the beta version of a web-based cooking app that taps Watson to create a new recipe every time someone uses it.