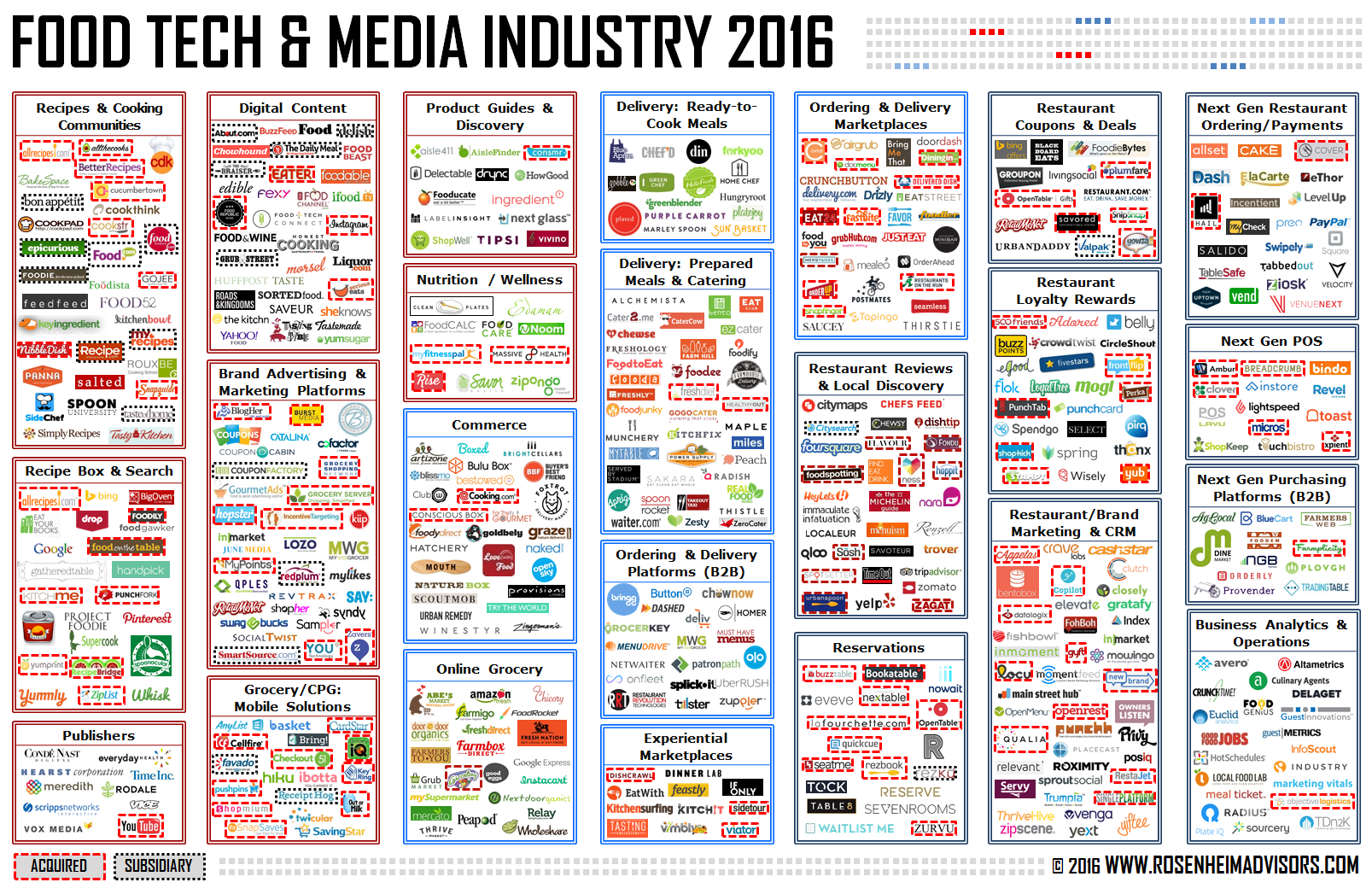 The global food tech and food media ecosystem was piping hot in 2015, with (at least)* $6.8 billion of capital flowing into private companies (including $2.3 billion within the U.S.). Outside of the U.S., a majority of both investment and acquisition activity was driven by China, Germany, India and the U.K. 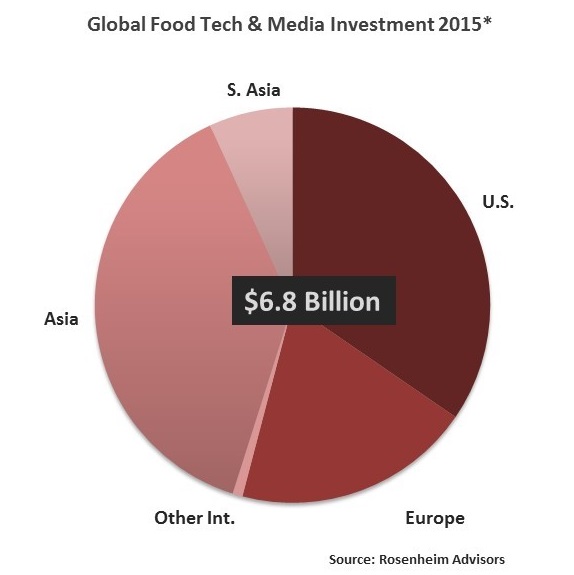 China appears to be a cycle ahead of the U.S. in terms of market maturity, with an increasing number of companies scaling beyond U.S. benchmarks of reach and growth. Notable deals in 2015 included the merger of China’s competing firms Meituan and Dianping (“akin to a mix of Yelp, GroupOn and food delivery”), reportedly now valued at $18 billion, as well as the massive stockpiling by Ele.me which closed two rounds (Series E and F) totaling $980 million, in addition to an undisclosed strategic investment from Chinese ridesharing leader Didi Kuaidi.

Earlier in the year, Germany’s Rocket Internet made a substantial strategic move to “create the biggest Internet-based food-ordering service outside of China,” and thus formed the “Global Online Takeaway Group.” I definitely recommend spending some time with Rocket Internet’s presentation discussing its investment thesis in the food sector (automatic download of pdf) to gain a clearer understanding of the vision behind the consolidation – some useful industry stats in there as well.

The online ordering and delivery segments represented a significant portion of the global consolidation over the past few years, with Rocket Internet and its portfolio companies (plus others such as Zomato, Just Eat and Grubhub), gobbling up a number of regional players. As with most roll-up M&A plays, now these teams will need to deal with the complexity of their newly acquired networks, and we will likely see some moments of reckoning in 2016 (some have already occurred).

*Given that most small deals are not translated or reported by the international press, the global data represented in this report is not comprehensive, and weighted towards larger/later stage deals.

The U.S. food tech and food media industry continued to mature in 2015 as investors made their biggest bets yet, with larger and later stage deals increasingly prevalent. We saw a notable shift towards expansion and scalability for the leaders of the pack with 36 percent of all deals sized at $10 million or greater (up from 32 percent in 2014), and 22 percent of deals sized at $20 million and above (up from 17 percent in 2014).

Note: Data for U.S.-based companies only, and reflects the sectors found in the Food Tech and Media Industry Map. Investment data does not include any M&A data or public market offerings.

With 142 private company fundings totaling over $2.3 billion, 2015 brought in slightly fewer overall deals and dollars than the previous year (there were 157 deals raising $2.6 billion in 2014). That may sound surprising to readers, as the persistent press coverage and stream of high-profile deals seemed to push 2015 into the highest level of food tech mania.

That is likely due to the mounting prevalence of startups and companies aiming to serve our every need through the “On Demand” + “Convenience” Economy, which drove a significant portion of the activity throughout the year (representing approximately 44 percent of 2015’s total U.S. food tech funding versus 29 percent in 2014). Within the sectors that broadly represent this sizzling subcategory (Online Grocery, Catering Marketplaces, Meal Delivery, Experiential Marketplaces, Online Ordering/Delivery, Food eCommerce), just over $1 billion was raised in 2015, up 34 percent from the $760 million of funding in 2014.

In the latest 2016 Food Tech & Media Industry Landscape (at the top of this report) I have clustered the boxes for the “On Demand” + “Convenience” Economy and outlined them in light blue. Notice the lack of M&A activity in these sectors. This will change in 2016. 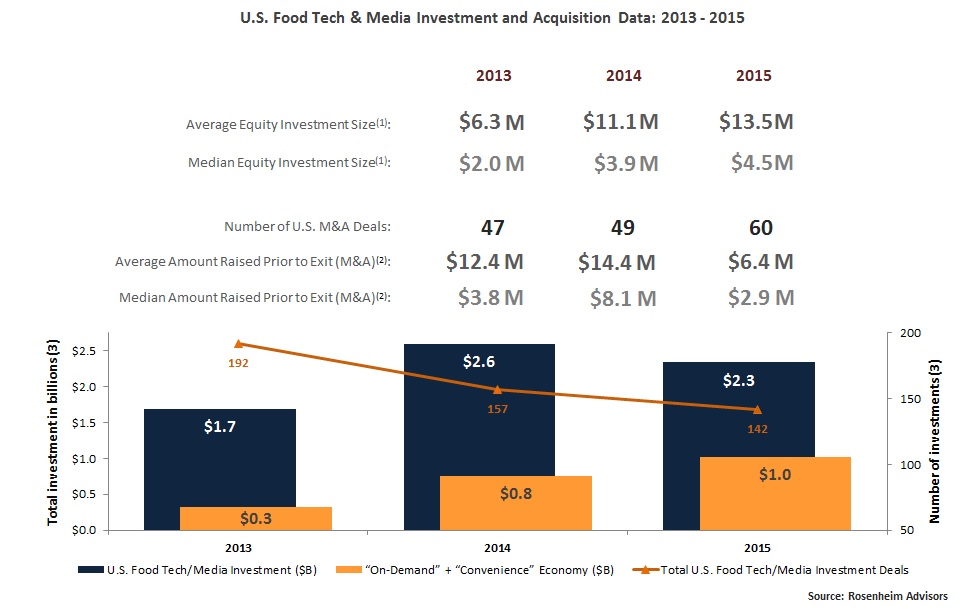 Note: Data for U.S.-based companies only, and reflects the sectors found in the Food Tech and Media Industry Map. Investment data does not include any M&A data or public market offerings. Due to new company and funding updates, the 2013 and 2014 data reflected in this chart does not equal the data provided in the 2014 Food Tech Media Funding & Acquisition Trends Report.

Food Tech a Mixed Plate in the Public Markets

During the same period, Grubhub’s stock price dipped 34%, while Just Eat closed up for the year at 55%. What happened? As Mahesh Vellanki points out in his analysis between the two parallel businesses, “the majority of Just-Eat’s revenue is still UK-based, and few competitors have been able to threaten their position,” while Grubhub faced a plethora of new entrants via the “On Demand” + “Convenience” Economy and subsequently altered its business model – which Wall Street reacted dramatically to.  A number of banks seem to think the market overacted to the potential threat from these new competitors, so it will be interesting to see how 2016 shapes up for Grubhub.

However, while we are very far from IPO-mania, the industry is still accumulating a growing number of well-capitalized players, and even with the currently rocky IPO market, new talk of IPOs among pure-play food tech companies has begun to surface (vs. tech incumbents with a wider focus like Yelp, Quotient (Coupons.com), Groupon, Priceline, etc.).

In what could be good news for growing restaurant tech companies, the payments and Point of Sale (POS) sector has three likely candidates in the pipeline, with Lightspeed, ShopKeep, and Revel all eyeing the public markets. Rocket Internet’s Delivery Hero has reportedly already picked bankers for a 2016 listing, while HelloFresh, another one of Rocket Internet’s investments, had filed in 2015 but put the IPO on hold in November (not before we grabbed some great market data though, thanks again Mahesh!). There is also speculation about upcoming public offerings for Zomato, Pinterest and Yext.

Echoing my own commentary from years past, the rise in incumbents focusing on this space will ultimately impact prospects for early stage companies too, as the new acquisition currency of the public markets will create additional exit paths for the variety of startups that will ultimately require a larger platform to survive.

Consolidation on the Menu for 2016

The reported value of U.S. food tech acquisitions in 2015 totaled close to $1 billion versus close to $1.2 billion in 2014 (plus another $7.9 billion for the Open Table and Micros deals combined). I had predicted that 2015 was going to be a significant M&A year in the food tech space, but it ended up lacking the definitive momentum that I had expected to occur.

Activity was indeed strong with 60 reported deals (vs 49 in 2014), and incumbents continued to increase their strategic stake in the ecosystem (including Grubhub, Groupon, Meredith, Yelp, UnderArmour, Tripadvisor, Priceline) but there were no monster deals in the U.S., and while there was a clear surge in the Ordering / Delivery / Payments categories, many targets (and even acquirers) were still on the smaller side.

While my consolidation predictions were mistimed for 2015, I think the private market overhang will give way to a significant number of opportunistic acquisitions in 2016.  In addition to the likely activity in the “On Demand” + “Convenience” Economy sectors, I think we will continue to see more global travel companies dipping into the food and restaurant sector. However, considering acquisitions like MyFitnessPal (Under Armour), or Rise (OneMedical), it is clear there is still a varied playing field of strategics looking to this space for thriving communities to engage with and build upon.