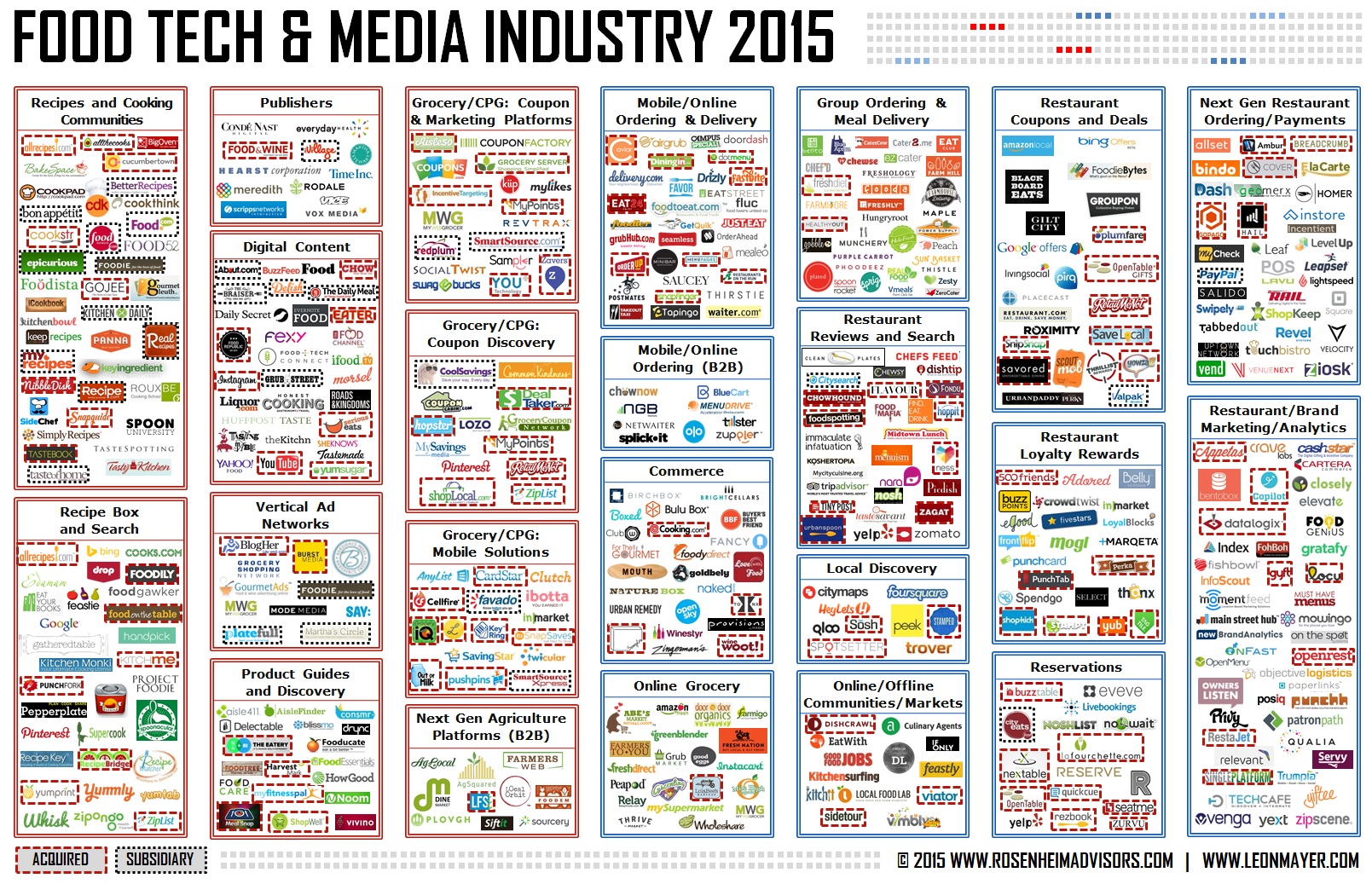 Together with more than $220 million raised in the global private markets through funding and acquisitions, and Square’s IPO totaling $279 million in primary shares, over $500 million was infused into the food tech landscape in November.

Among the seven acquisitions, seventeen private capital raises and one IPO, activity within the delivery and on-demand sector was dominant, with continuing trends towards consolidation in this sector and a prevalence of “acqui-hires.” Over two thirds of the deals were international, with companies from India, the UK and France representing the majority.

Velocity Acquires Uncover. The London, UK-based mobile restaurant booking app will allow Velocity to add mobile booking to its mobile hospitality app, which currently includes mobile payments, restaurant suggestions, and rewards. In the past two months, Velocity has also acquired Cover and Tab Payments, in addition to receiving $16 million in Series A funds in September.

Lidl Acquires Kochzauber. The acquisition of the Berlin, Germany-based healthy food delivery service, which delivers recipe meal kits with fresh ingredients and cooking instructions, will allow Lidl, the German supermarket chain, to increase its sales by entering into e-commerce.

GeoPost Acquires Resto In. GeoPost, the international express delivery subsidiary of Le Groupe La Poste has acquired an 80% share in Resto In, a Barcelona-based virtual market place for restaurants offering quick home delivery solutions. The company offers a delivery to over 1 million registered customers and partners with more than 800 restaurants, pastries and stores in 5 countries (France, Belgium, UK, Germany and Spain). This acquisition bulks up GeoPost’s focus on the food category, and comes alongside GeoPost’s investment in local delivery startup Stuart (details in Funding section below), which was also founded by partners of Resto In.

Ele.me Raises Strategic Investment from Didi Kuaidi. The Beijing, China-based ridesharing market leader has invested an undisclosed amount into the Shanghai-based food delivery service, which was valued at $3 billion during the most recent fundraise in August. The companies plan to link their services, which will allow Ele.me to expand the range of their delivery service from a 3-mile radius to citywide. As Tech in Asia points out, it is likely a move that’s “aimed at keeping up competition with Uber and Baidu” given each company’s increasing presence in the food vertical.

Deliveroo Raises $100m. The London, UK-based restaurant delivery service allows consumers to order food from exclusive restaurants for on-demand delivery. The user, restaurant, and deliverers each receive information from connected apps, which allows restaurants to respond to orders within 90 seconds and deliveries within 30 minutes. The company currently operates in 50 cities across 12 countries in Europe. Coming on top of a $70 million raise this summer, the new investment will be used for international expansion outside of Europe, with plans to expand to Dubai, Hong Kong, Singapore, Melbourne, and Sydney.

Square Raises $279m in IPO. The San Francisco-based payment technology company priced its Initial Public Offering at $9 per share, valuing the company at approximately $2.9 billion at IPO. Although the pricing was below the initial proposed range of $11-$13, and significantly lower than the $6 billion valuation in 2014, shares have rallied moderately on the secondary market, and have generally been in the range of $11-$12 range since IPO. The lower public valuation, however, has continued to fuel the narrative of a pullback in the tech IPO market, as well as private market tech valuations.

Place of Origin Raises Seed Funding. The Bangalore, India-based specialty foods platform allows users to discover a variety of “authentic” foods from across India. Users can choose from over 500 products from 25 cities, with delivery available to 20 cities in India. The funds will be used to enhance the company’s technology and infrastructure and to expand menu offerings.

Salido Raises $2m. The New York, NY-based SaaS operating system for restaurants allows restaurants to manage the front and back of house together, including point of sale, reporting, customer and labor management, inventory, and recipes. The company will reportedly use the investment to expand to 350 restaurants in the next year.

Stuart Raises $23.4m. The Barcelona, Spain-based delivery service, founded by founders of Resto In (recently acquired by GeoPost), is pre-launch, yet describes itself as an “on-demand urban logistics app and platform.” The company plans to allow consumers to make purchases for same-hour on-demand delivery, reportedly done by “allowing anyone to deliver anything at any time.” According to TechCrunch, “rather than going down the surge-pricing route, Uber-style, the startup’s algorithm will where necessary ‘pool’ deliveries to keep the cost down”. The funds will be used for international expansion, with plans to expand to Brussels, London, and Berlin.

Eating with the Chefs Raises “Seven-Digit” Seed. The Berlin-based food startup offers affordable high end sous-vide dinners created by rising chefs for customers to heat up at home. The startup was launched in September 2015 by former StudiVZ CEO Clemens Riedl, Eatüber founder Chanyu Xu and Jochen Wolf. The team plans to use the funds to expand operations.

EatFirst Raises $8m. The London, UK-based online restaurant allows customers to order meals online for on-demand delivery. Meals are designed and prepared by professional chefs and made available for order. Restaurants currently operate in London and Berlin. The start-up claims to have already achieved 30% month-on-month sales growth and has delivered over 100,000 meals to date. Initially backed by Rocket Internet, the new funds will be used to grow the company, with plans for international expansion.

Chefs Basket raises $6m. The Mumbai, India-based ready-to-cook food startup provides consumers with meal kits. The investment will be used to develop new products and expand the company to 15 cities in India as well as internationally to South Africa, Canada, and Australia. The company has partnered e-commerce websites including Amazon, Flipkart, Snapdeal, BigBasket, Paytm and Grofers, along with supermarket chains Hypercity, D-Mart and Big Bazaar to sell its products. With this expansion, Chefs Basket aims to increase products sales from 130,000 units per month to 400-500,000 units per month by March 2016.

BrightFarms Raises $13.65m. The New York, NY-based grower of local produce builds and operates greenhouse farms throughout the United States. Each greenhouse is partnered with supermarkets and vendors to provide consumers with fresh, local produce year-round. The company will use the funding to commercially scale greenhouses to meet increasing demand.

Satvacart Raises $1.8m. The Gurgaon-based grocery delivery startup offers over curated products across grocery, fruits and vegetables, personal care, household essentials, and baby care through its online platform. After raising an initial seed in July, the company stated that the funding will be used to strengthen technology backbone and expand into other geographies.

ZenChef Raises $6.5m. The Paris, France-based website creator (previously named 1001menus) allows restaurants to design and create their own digital presence, including website, social media, management systems, and reviews. ZenChef positions itself as a one-stop solution for all marketing and communications purposes, and currently operates in France, Germany, the United Kingdom, and Spain. The investment will be used for international expansion, and the company aims to have 25,000 clients by 2018.

Boibanit Raises $150k. The Vadodara, India-based meal delivery service, allows consumers to order restaurant food online for on-demand delivery. Customers have the option to combine foods from multiple restaurants in one order. Boibanit currently operates in 350 restaurants in Indore, Lucknow, Surat, Noida, and Vadodara. The investment will be used to expand to Ahmedabad, Bhopal and Ghaziabad.

Twigly Raises $200k. The Guragon, India-based kitchen-on-a-cloud service allows customers to order meals online to be delivered directly to their homes from a central-based kitchen. The company models itself after the United States-based company, Sprig, which delivers organic meals in 15 minutes. The investment will be used to expand kitchen locations and partner with delivery services.

Zipongo Partners with Yummly to provide suggestions for healthy eating.