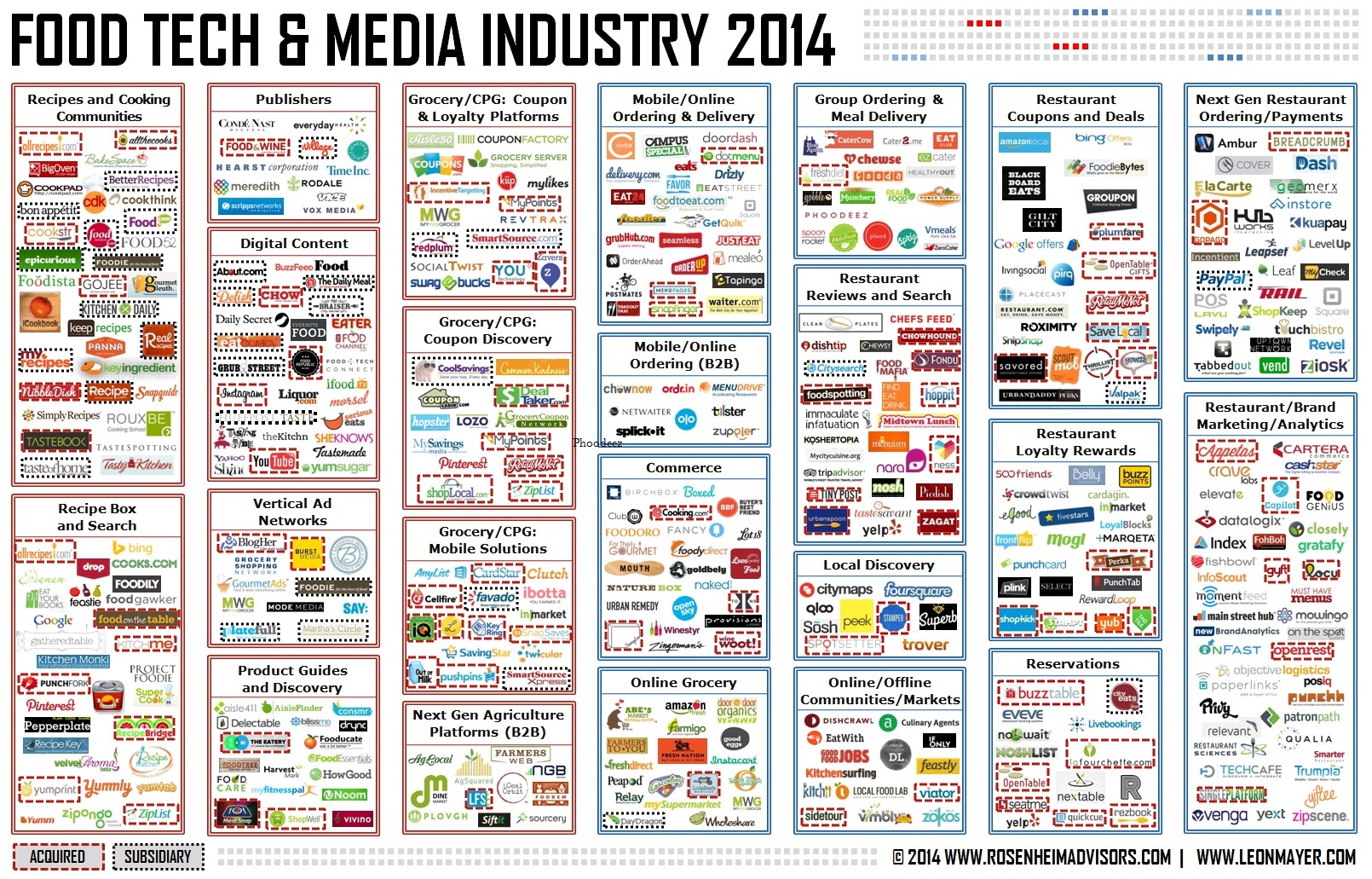 Food tech funding, M&A and partnership activity was robust in October with eight acquisitions and twelve financings, however, with a majority of deals at the seed stage and all acquisition amounts undisclosed, the sector only reported an influx of $32.3 million for the month.  Restaurant technology definitively paved the way, with fifteen out of the twenty deals having to do with ordering, delivery, reviews or other restaurant functions. As we have seen in the last few months, there were a significant number of international transactions, particularly in M&A.

The usual suspects among the broader incumbents in the space continued to make headlines throughout the month. Groupon put its acquisition of SnapSaves to use by launching Snap – a new app that gives customers cash back when they buy certain items at the grocery store. Groupon also decided to go up against Yelp and Google by introducing Pages, an online directory that will give businesses their own home page on Groupon’s site, where offers, news, user reviews and other information will live.

Google upgraded its app to integrate restaurant reservations (through a partnership with OpenTable), while also expanding its Express delivery service to compete with Amazon, and Amazon Fresh. And as online grocery shopping barriers continue to dissolve, even more players are entering the market. For example, Overstock.com (!?) is a surprising new entrant to the sustainable agriculture movement, with its recently unveiled locally-focused Farmers Market.

Wix Acquires OpenRest. The Tel Aviv, Israel- and Wilmington, DE-based restaurant ordering startup will expand the Wix portfolio of small business offering by enabling restaurant owners to create online ordering websites, mobile websites and native mobile apps. According to the release, OpenRest’s integration into the Wix platform will enable restaurant owners to take orders directly from their Wix websites and native mobile apps, and will lay the groundwork to launch a complete online business management solution for restaurants during 2015.

Yelp Acquires Cityvox.  The acquisition of the French restaurant and nightlife reviews site “further illustrates Yelp’s commitment to the development of the European market and clearly underlines our goal of becoming the go-to local business review site internationally,” said a blog post from the company. Yelp says it’s integrating Cityvox’s reviews and photos into its own platform, however it is unclear if Cityvox, which was a subsidiary of French telecom giant Orange, will remain as a standalone entity.

Yelp Acquires Restaurant-Kritik. The Hamburg, Germany-based restaurant review site will further expand Yelp’s presence in Europe, as it has more than 330,000 reviews of 94,000 eateries in Germany.

iFood Acquires Papa Rango and Alakarte. Brazil-based iFood, which recently merged with the Brazilian business of UK-based Just Eat, brings eighteen new cities into its network with these two Brazilian restaurant delivery acquisitions, and expects to add over 50 thousand orders per month, bringing its total orders per month to over 400,000.

Lightspeed Acquires POSIOS. The Ghent, Belgium-based cloud-based mobile POS-startup will help Lightspeed enter the food service vertical and expand internationally. According to Street Fight Mag, Lightspeed is bringing on much of the team to help guide the restaurant product, and help the firm expand into European markets. Street Fight also notes that this deal underscores the potential for consolidation within a small business software segment that has seen an intense influx of capital and redrawing of product lines.

OrderUp Acquires Back Forty. The Baltimore-based online food ordering and delivery service acqui-hired the five-person development team of Back Forty, a small technology consulting firm in Baltimore. OrderUp was previously one of the tech firm’s 10 clients.

GourmetItUp Raises ~$300k. The Mumbai, India-based online platform for gourmet cuisine partners with top fine-dining restaurants in India to create exclusive dining experiences like set meals, wine tastings and bespoke menus which are available on the site as well as through concierge services, credit cards, banks and corporate partners. Restaurant partners in Mumbai include Hakkasan, Yauatcha, Le Pain Quotidien and The Tasting Room. According to VC Circle, GourmetItUp plans to use the funds to expand its operations in India and globally. A part of the capital will go into deeper technology integration with its restaurant partners, besides ramping up its customer acquisition activities.

MOGL Raises $11m. The San Diego-based rewards and loyalty app allows users to gain cash-back rewards for spending money at partner restaurants and also provides the option to donate rewards to a fundraiser or transfer rewards into points toward airline flights, hotel stays and more. In covering the raise, Xconomy further details the shift in the company’s business model, including offering more flexibility to restaurant in varying the size of their rewards during peak and off-peak hours, and rather than charging restaurants a percentage of each tab, MOGL now charges a flat monthly rate. The company plans to use the new funding to expand beyond its existing market of six cities into 14 additional metro areas—including New York, Boston, Houston, and Chicago.

La Belle Assiette Raises $1.7m. The Paris, France-based private chef marketplace offers consumers the ability to order chef-prepared food delivery or schedule a chef to come to their home or event. The service is currently available in France, the U.K., Belgium, Switzerland and Luxembourg. The company will use the funds to build up its development and marketing teams, expand sales and marketing efforts and continue to grow internationally.

Nara Logics Raises $6m. The Cambridge, MA-based artificial intelligence platform is most known for its personalized hotel and restaurant recommendation engine. However the company recently launched Naralogics.com, its platform-as-a-service for providing personalization on demand. Nara’s platform helps businesses provide relevant content and experiences to customers through Big Data aggregation, synthesis and analytics; it also enables website, email and mobile personalization. The company plans to use the funds to further productize the platform, making it easier for businesses to get started using the technology to improve their business. FinSMEs.com features an interview with Nara’s president, which further details the company’s strategy and growth plans.

Drop Raises $2m. The San Francisco, CA- and Dublin, Ireland-based interactive recipe platform combines an iPad-connected kitchen scale with recipe content via an app. As the scale senses an ingredient has been added to the bowl, bakers are automatically guided through hundreds of recipes – from simple cookies to more complex pastries and pastas. The company plans to use the funds to build out its engineering, customer support and community teams, while increasing its marketing activities.

Monsieur Raises $2m. The Atlanta, GA-based developer of a robotic bartending system consists of three components: a beverage-dispensing machine capable of 150 drinks without refilling; a mobile app available on Android and iOS; and an online app used to manage and monitor machines. The system, which is currently on pre-order and available in tabletop and kiosk sizes, will reportedly be launched in several NBA arenas around the U.S. this season, and has beta units deployed in several restaurants and bars in Atlanta. The company intends to use the funds to accelerate product development and add resources in engineering, operations, sales, and marketing.

Morsel Raises $800k. The Chicago-based social media network and food media property aims to “engage food lovers, chefs, mixologists and other restaurant industry types in a conversation around the food and drinks they love”. The emphasis will be on fine dining, and the site will host a combination of curated content from chefs, as well as posts from members.

EatStreet Raises $4m. The Madison, WI-based online and mobile food ordering service EatStreet, which raised the initial $6m Series B in April 2014, intends to use the funds to further develop its iOS and Android apps, expand into new markets, and double the engineering team. The company also integrates into the Yelp Platform, where online users can order food directly from restaurant pages on Yelp and orchestrates digital loyalty programs with its restaurants where diners can earn coupons.

Phoodeez catering raises $600k. The Boston, MA-based corporate catering concierge platform caters events and luncheons by organizing and supplying food from multiple local restaurants. As detailed by BetaBoston, Phoodeez charges clients to manage their catering, while restaurants pay monthly fees for the extra revenue Phoodeez brings in. In addition, Phoodeez receives volume discounts on restaurant food but can charge regular menu prices on its website, enabling the company to turn a profit on every dish. The company intends to use the funds to grow operations and expand the team.

Sourcery Raises $2.5m. The San Francisco-based online wholesale food supplier director and payments processor connects buyers and suppliers while streamlining ordering, delivery, pricing and payment processes. According to VentureBeat, Sourcery helps about 30 percent of its customers find new suppliers and that the directory side of its business is an area it will be investing more resources in. The company will use the funds to expand its platform into new markets including Los Angeles, Portland, and New York City.

Blue Apron and Bravo Media Partner to Bring Fans a “Top Chef” Cooking Experience at Home. The partnership allows Top Chef fans across the country the opportunity to cook the winning dish from the season premiere.

Greenling Partners with Instacart for New Delivery Service. Previously, Greenling delivery orders needed to be filed directly through the company at least a day ahead of time. The partnership leverages Instacart, which can pull from a network of 300 local, personal shoppers, to fill those orders through Greenling’s South Austin warehouse in an hour.