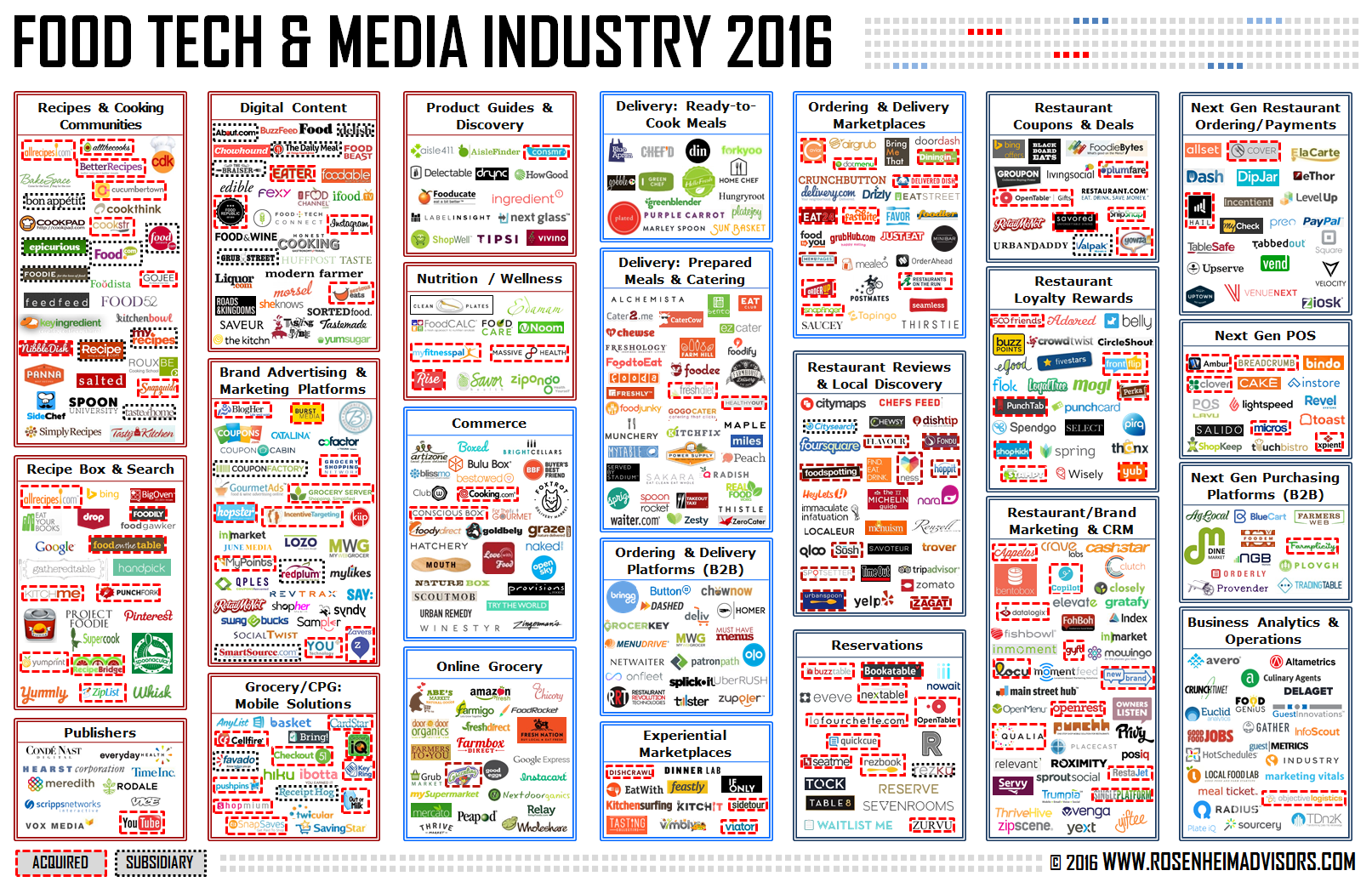 Investment and M&A activity in February was moderate, with over $265 million of reported transaction value during the month. The bulk of the value was driven from Just Eat’s acquisition of five companies from Rocket Internet ($140 million).

On the funding front, sixteen companies raised a little over $105 million during the month (excluding Instacart’s undisclosed Whole Foods investment), with all but four financings sized at less than $10 million. This was a significant shift from January’s activity, as most deals were Series A or earlier and there was an absence of later stage deals. Approximately 65% of funded companies had operations in the U.S.

Noticeably, “health” was a prominent theme across the deals for the month; ranging from One Medical’s acquisition of Rise to multiple fresh or healthy food concepts to nutritional data and analysis. While health is a regular food tech discussion topic, it doesn’t show up quite as regularly in the investment landscape. Beginning of a new trend or we just happened to still be in close proximity to New Year’s resolutions? We shall see.

Thirstie Acquires DrinkFly. The Chicago, IL-based mobile app for on-demand alcohol delivery will grow the footprint of Thirstie, particularly in Chicago’s metro area, where it will now be the single biggest player in the space. Based in New York, NY, Thirstie is a content-to-commerce marketplace for alcohol delivery, offering both traditional ecommerce and on-demand delivery by partnering with local stores to offer a range of wine, beer, and spirits for delivery within an hour. DrinkFly’s users and retail partners will be transitioned over to the combined entity, which includes Thirstie’s digital magazine, The Craft (the company says 80% of consumers come through their content platform), featuring recipes, news, hosting tips and local stories.

Just Eat Acquires Rocket Internet’s Delivery Businesses in Spain (La Nevera Roja) and Italy (PizzaBo & hellofood Italy), Brazil (hellofood Brazil) and Mexico (hellofood Mexico). In order to “further reduce complexity of Rocket Internet,” the Berlin, Germany-based incubator has decided to sell “non-core operations that are not market-leading” to the London-based publically traded online ordering and delivery company Just Eat. Interestingly, this comes exactly one year after Rocket Internet announced it formed its “Global Online Takeaway Group” in addition to acquiring La Nevera Roja and Pizzabo. While the exact value of the assets being sold are difficult to pinpoint, Tech Crunch notes that there are clues that Rocket is selling these at a loss; “For example, in Italy, hellofood is understood to have paid €55 million — nearly half the value of the whole deal today — for PizzaBo alone.”

One Medical Acquires Rise. The San Francisco, CA-based mobile app for personalized nutrition and diet coaching will allow One Medical, a healthcare company, to connect patients with virtual nutritionists. According to the Wall Street Journal, One Medical sees an opportunity to “offer its patients a wider range of healthcare services via the smartphone that could potentially save them trips to the doctor’s office”. Rise will continue to operate independently, and the company will still be run by its original co-founders within One Medical.

iChef Raises $5.6m. The Taipei, Taiwan-based software developer produces iPad point-of-sale systems for restaurants. The software system includes table management, reservations, ordering, and payment. iChef a will use the funding to expand and to develop data analytics. To date, over a thousand restaurants are using iChef systems, and the company aims to reach 3,000 stores in Asia by the end of 2016.

Pocketin Raises $150k. The Noida, India-based platform for restaurant deals and events allows consumers to discover, compare, and choose restaurant deals in real time. To date, the company reports it has over eight thousand app downloads and has seated over 6,500 diners. The funds will be used for expansion throughout Delhi, Noida, Ghaziabad, and Guragon, with additional plans for expansion to Mumbai, Bangalore, and Dubai. In addition, the company says it plans to double its team of 15 and partner with over 1,200 restaurants in the next six months.

Deliv Raises $28m. The Menlo Park, CA-based crowdsourced delivery service provides customers with same-day delivery of products from local merchants, national and e-commerce retailers. Deliv currently operates in over 100 cities and serves over four thousand businesses. UPS Strategic Enterprise Fund is a notable new investor in the round, stating it intends to gain insights into the market dynamics of same-day delivery. The investment will be used for product development and to broaden the company’s national presence.

Instacart Raises Undisclosed Strategic Funding from Whole Foods. The San Francisco, CA-based grocery delivery service will receive funding from supermarket chain, Whole Foods. The deal will expand available geographies with Instacart delivery and includes a five-year partnership between the companies, making Instacart the exclusive delivery service for Whole Foods perishable items. Additionally, with the Instacart Deals platform, Whole Foods Market shoppers can take advantage of special deals and discounts on their favorite products. The partnership thus far is reportedly impacting Whole Foods’ bottom line; as TechCrunch points out, “Whole Foods stores with dedicated shoppers are seeing growing Instacart sales – on average, this can be in the 5 to 10 percent range of their total store sales.”

Fooda Raises $5.9m. The Chicago, IL-based catering platform offers virtual cafeterias to corporate offices by sourcing a rotating daily menu from local restaurants. The company also offers delivery and pop up locations, which extends the reach and brand of local restaurants. As the Chicago Tribune reported, in November the company opened its first mall location at The Shops at North Bridge to expand to more publicly accessible locations.

RAW Pressery Raises $4.5m. The Mumbai, India-based delivery juice company currently delivers cold-pressed juices to homes in six Indian cities. According to Tech Crunch, the company aspires to be the largest “clean label” lifestyle brand by adding soups, smoothies, and other pre-packaged food without additives. The company will use the money to introduce new flavors, increase production capacity and launch brand-building campaigns

First Eat Raises $200k. The Guragon, India-based mobile app offers subscription and on-demand delivery of healthy meals. The startup allows users to choose meals according to their health requirements, and aims to solve the problem of ‘awareness, availability and affordability’ of necessary healthy meals, by offering healthy organic meal options. The funds will be used to expand throughout the NCR region, deploy targeted marketing and develop the First Eat technology platform. In addition, the company aims to increase service to 400 to 500 meals per day next quarter.

Feasty Raises $800k. The Cincinnati, OH-based local deals app shows users deals at nearby restaurants based on their location. According to the Cincinnati Business Courier, users don’t need to purchase the deals, the app is intended to help encourage users to choose restaurants with small perks, like a free item. The company has partnered with 60 restaurants in Cincinnati and Northern Kentucky.

TableHero Raises $1m. The Mountain View, CA- and Bangalore, India-based company provides restaurants and small businesses with intelligent operating systems. The operating systems include a simple website designer, as well as products to manage reservations, bookings, payments, and customer loyalty. The investment will be used for product development and for the engineering and product design team. TableHero plans to launch the product in the U.S. on the west coast in cities like Seattle, Portland, Los Angeles, and the Bay Area.

Label Insight raises $10m. The St. Louis, MO-based technology and software producer provides consumers and retailers with information about food labels. Label Insight technology allows nutritional information and food product data to be more transparent to retailers, consumers, and manufacturers.  Data includes, but is not limited to, allergen information, whether foods meet “healthy” standards, and if sales of certain types of products are up or down. The strategic investment by KPMG allows its member firms to offer retail food and beverage clients around the globe access to Label Insight’s proprietary technology, which transforms product information into smart attributes, such as nutrients and allergens, providing users with a deep understanding of their product set. The investment will be used to develop new products, broaden custom data views and expand data science capabilities.

Good Uncle Raises $2.2m. The New York, NY-based delivery-only restaurant concept, which expects to launch in the fall, will allow consumers in smaller U.S. cities to order top restaurant food from major cities for on-demand delivery. The company plans to set up kitchens and delivery fleets in those smaller cities and towns, linking local populations to them with a mobile app that features small, carefully curated menus of hits from acclaimed restaurants. The funds will be used to build a team and app and develop restaurant partnerships.

IfOnly Raises $10.25m. The San Francisco, CA-based marketplace for “incredible experiences” offers a catalog of experiences with experts in the domains of food, sports, animals, entertainment, technology, and more. The company currently operates in the Bay Area, New York, and Los Angeles and offers over 10 thousand experiences. The company is working to offer more experiences tailored to (and priced for) a broader range of clients.

Power Supply Raises $5m.  The Alexandria, VA-based health food delivery service offers healthy meals for one-time or weekly subscription delivery. The company differs from other meal delivery services in that it uses local restaurants and caterers in place of central production kitchens and that it delivers directly to fitness community spots, such as gyms. Power Supply is currently operating in Washington D.C., Los Angeles, and San Francisco. The investment will be used to expand into new markets.

FarmDrop Raises $4.4m. The London, England-based online farmers market allows consumers to buy local food directly from local farmers. The company’s mission is to “fix the food chain” by making the food industry based on local farms and food production. Customers place orders online and pick up their orders from producers at their local FarmDrop venue. FarmDrop will use the funding to develop its platform.

Food.ee Raises $6m. The Vancouver, Canada-based corporate catering and concierge service provides companies with meal delivery from local high-end restaurants. Food.ee has over 4000 customers and has partnered with over 250 restaurants. After success in its three U.S. pilot cities—Austin, Denver, and Philadelphia, the company will use the funds to launch in Atlanta and Minneapolis in March as well as more U.S. cities throughout 2016.

Thrive Market Raises ~$20m. The Los Angeles-based wholesale buying club for health-conscious products has reportedly raised additional capital after an oversubscribed Series A this past summer via a convertible note, according to Bloomberg. The company has stated 2015 revenues of close to $50 million, with about 180,000 members, and recently expanded into private label, releasing its own organic coconut oil and tomato sauce.

La Belle Assiette Raises $1.5m. The Paris, France-based on-demand private-chef and catering service allows consumers to select a professional chef to cook in their home or at office events. The chosen chef provides all ingredients and equipment to cook the catered menu. Currently, La Belle Assiette employs over 700 professional chefs in six European countries. The investment will be used to launch four new catering services—Buffets, Canapé Receptions, Office Lunches and Cooking Classes—in the next six months.

Foursquare Partners with Delivery.com to provide on-demand delivery in 36 cities in the United States.

Peapod Partners with WMATA to allow commuters to pick up grocery delivery orders at their Metro station stop.

Zomato Partners with Quick Delivery  to provide online ordering and on-demand delivery in the Philippines.

Amazon Partners with U.K. Grocer Morrisons to include “hundreds of Morrisons products” within Amazon’s one-hour Prime delivery and Pantry services.

Scanbuy Partners with inMarket to connect with consumers via mobile app while they are shopping.