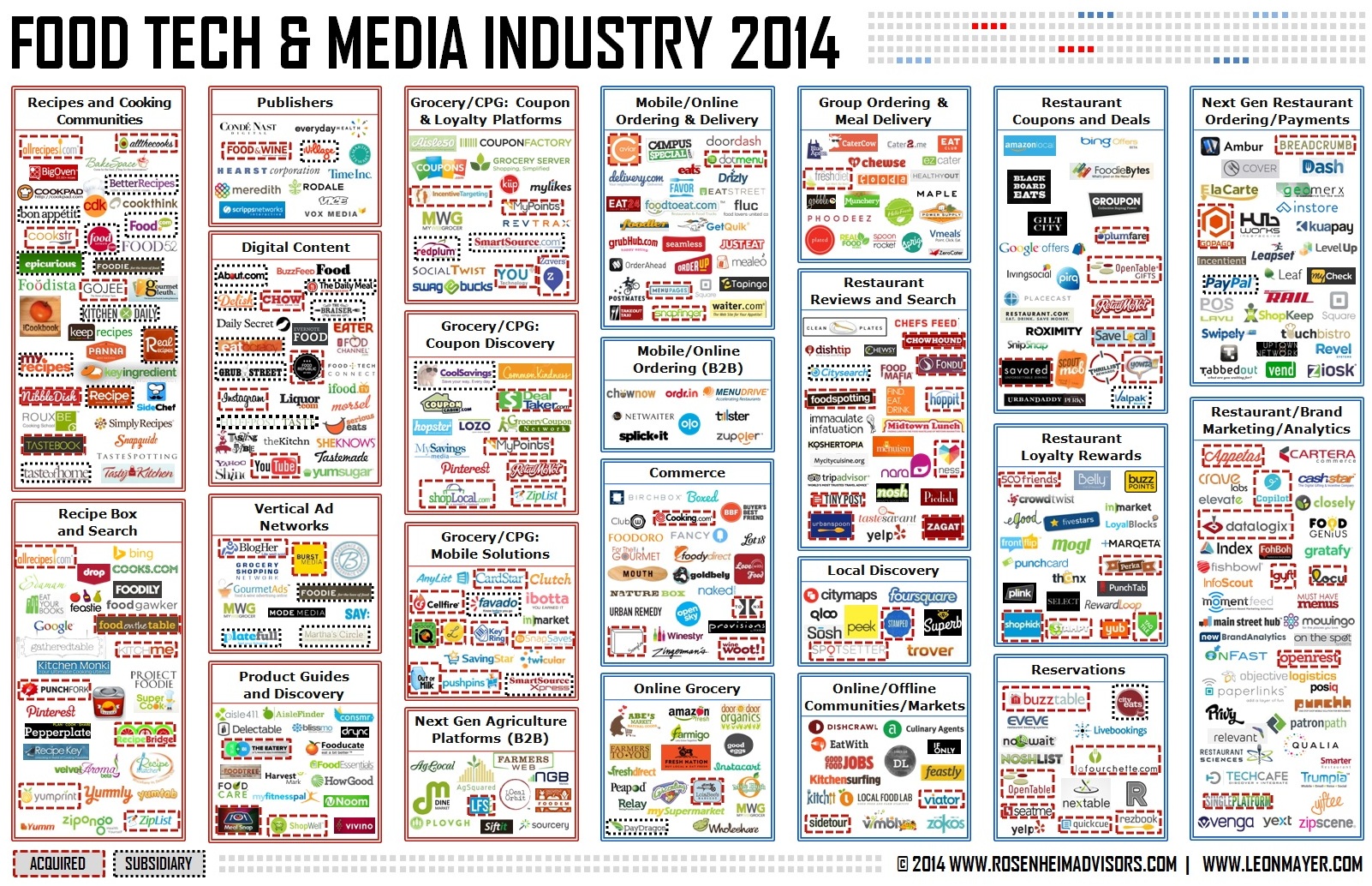 The last month of 2014 rounded out with a reported $230 million+ invested into the food tech sector, however it was likely much higher given two large transactions had an undisclosed deal size. On the funding side, activity was relatively in line with last December, although the Instacart megaround and undisclosed (yet reportedly significant) Baedaltong funding are examples of later-stage bets that were quite rare in 2013. On the M&A front however, activity was very light, especially compared to last December’s seven acquisitions versus three deals this year (with only one deal in the U.S.).

By looking at December’s deals it is clear investors are still buying into the on-demand opportunity, and they aren’t the only ones. Along with the news of Uber’s $3 food delivery service, Amazon’s future as a delivery company, and Square’s new food delivery app (via Caviar), the media’s focus on the delivery industry persisted throughout the month with publications pontificating on why so many commerce and tech companies are getting into the food delivery game, the new bubble of same-day delivery, the “Uber-ification” of local business sectors, and the legal problem of the on-demand economy (which I think needs to be highlighted more often).

While some consolidation has already begun, I think 2015 will be a year of opportunity for established companies looking to expand their services and geographic empires in this space.

Oracle Acquires Datalogix. The acquisition of the Westminster, CO-based SaaS marketing firm, which examines the offline sales impact from ads on Facebook and Twitter for retailers and CPG clients, complements Oracle’s acquisition of BlueKai and rounds out its digital marketing suite. As I noted in past reports, Datalogix raised $45m in May, and acquired Spire Marketing in February, which uses analytics from grocery loyalty card data, point-of-sale purchase data, and trade-level data to power in-store marketing initiatives which drive spontaneous purchases. VentureBeat points out that Datalogix brings a dataset that wasn’t in Oracle’s arsenal before, as rather than just providing more data, it creates “unique datasets that can be brought together and cross-referenced to make a whole greater than the parts.”

Zomato Acquires Cibando. The Rome, Italy-based restaurant search and discovery app provides users with professionally-generated content such as reviews and photos for approximately 82,000 restaurants across various cities in Italy. According to TechCrunch, all of Cibando’s team will be joining the company as they will be transitioning its full user base and traffic to Zomato. Going forward, Zomato plans to scale up its teams in Rome and Milan to 30-40 full-time employees, up from Cibando’s current headcount of 10. TechCrunch also reports Zomato plans to invest $6 million in its newly-acquired Italian operations over the next 2 years, growing the team to 150-200 people across the country’s top six cities.

Foodpanda Acquires Donesi.com, Pauza.hr, and NetPincer. The global online food delivery marketplace announced a series of acquisitions targeting market share in Central Eastern Europe (Serbia, Bosnia & Herzegovina, Montenegro, Croatia and Hungary). As TechCrunch points out, “the significance of the acquisitions is two-fold: first for how it underscores the rapid acquisition march of takeout delivery companies as they aim for better economies of scale; and the second is the emphasis on emerging markets as a growth engine.” Last month the company announced an asset swap with its competitor Delivery Hero to respectively improve their positions across India, Mexico and Latin America.

Instacart Raises $220m. The San Francisco-based on-demand grocery delivery service offers same day grocery delivery via personal shoppers who hand pick items from a variety of grocers, food providers and select retailers in urban areas. The new capital brings the company’s total VC funding to almost $265 million and values it at around $2 billion (in June, the company’s $44m Series B was reportedly valued at $400 million). The company plans to use the funds toward category expansion, continued geographic growth and technology enhancements. Two good reads which dive deeper into the Instacart model and opportunity are at StreetFight (“Why Instacart’s $2 Billion Valuation Doesn’t Spell Bubble”) and Gigaom (“On the way to $220M in funding, Instacart quietly changed its business model”).

SpoonJoy Raises Seed Funding. The Bangalore, India-based delivery startup offers a subscription service to deliver custom-made meals to both office and residential customers. Users can select food of their choice including fruits, vegetables, lunch packs and snacks. The funds will be used to expand operations in the city, in addition to growing the customer-base.

‘Call a Chicken’ Raises $1.6m. The Chengdu-based WeChat-based chicken-focused food delivery service offers different chicken-based dishes, prepared by “renowned chefs” for home delivery. Customers order via WeChat or by phone (it does not appear there is a website), and the dishes available change periodically and range in price.

SideChef Raises $1.2m. The Santa Monica, CA- based step-by-step cooking app and community uses photos and written instructions for every recipe step, with recipes currently sourced from 100 bloggers worldwide. Proceeds from the company’s new funding will be used to create partnerships with various U.S. companies and for continued app development.

Kitchit Raises $7.5m. The San Francisco-based on-demand in-home restaurant experience platform allows customers to book personal chefs for fully customizable experiences, as well as the recently introduced “Kitchit Tonight” which are signature meals for delivery, available same-day if booked by 1pm. The company intends to use the funds to accelerate the growth of the marketplace.

Delivery Hero Invests in “Substantial” Stake In Baedaltong. The Korean food ordering company, which offers its approximately 11 million users a selection of menus from some 150,000 restaurants in South Korea using a “click to call and order” system, will secure a sizable Korean footprint for Delivery Hero. Although TechCrunch reports that a “majority stake” was acquired, the author also concedes that the “exact amount of the investment nor any other financial details” were revealed, thus it is unclear if controlling interest was indeed handed over to Delivery Hero. Regardless, this strategic investment creates a mutually beneficial partnership to capture market share in a region where other players are also bulking up for rapid growth.

Dinner Lab Launches $2m Private Placement Offering. The New Orleans-based membership-based supper club, which raised $2.1m Seed funding in June, produces pop-up dining events and gathers customer feedback from those sessions to inform ideas for new restaurants. The company is taking advantage of a new type of crowdfunding investment structure for accredited investors, as part of the JOBS Act (Jumpstart Our Business Startups Acts). According to Forbes, after seeking funding from Venture Capitalists, the company’s CEO Brian Bordainick realized that “the terms set by VCs didn’t meet their needs or expectations.” The company plans to use the new funding to further expand the company’s reach.

Amazon.com partners with Ibotta to offer customers cash back on their purchases.

Rouxbe Cooking School partners with The Plantrician Project to develop Culinary Rx, designed as a food-as-medicine prescription that healthcare and wellness professionals can confidently prescribe to patients and clients.

Drizly opens its API to add alcohol delivery to partners including MillerCoors and Foursquare.