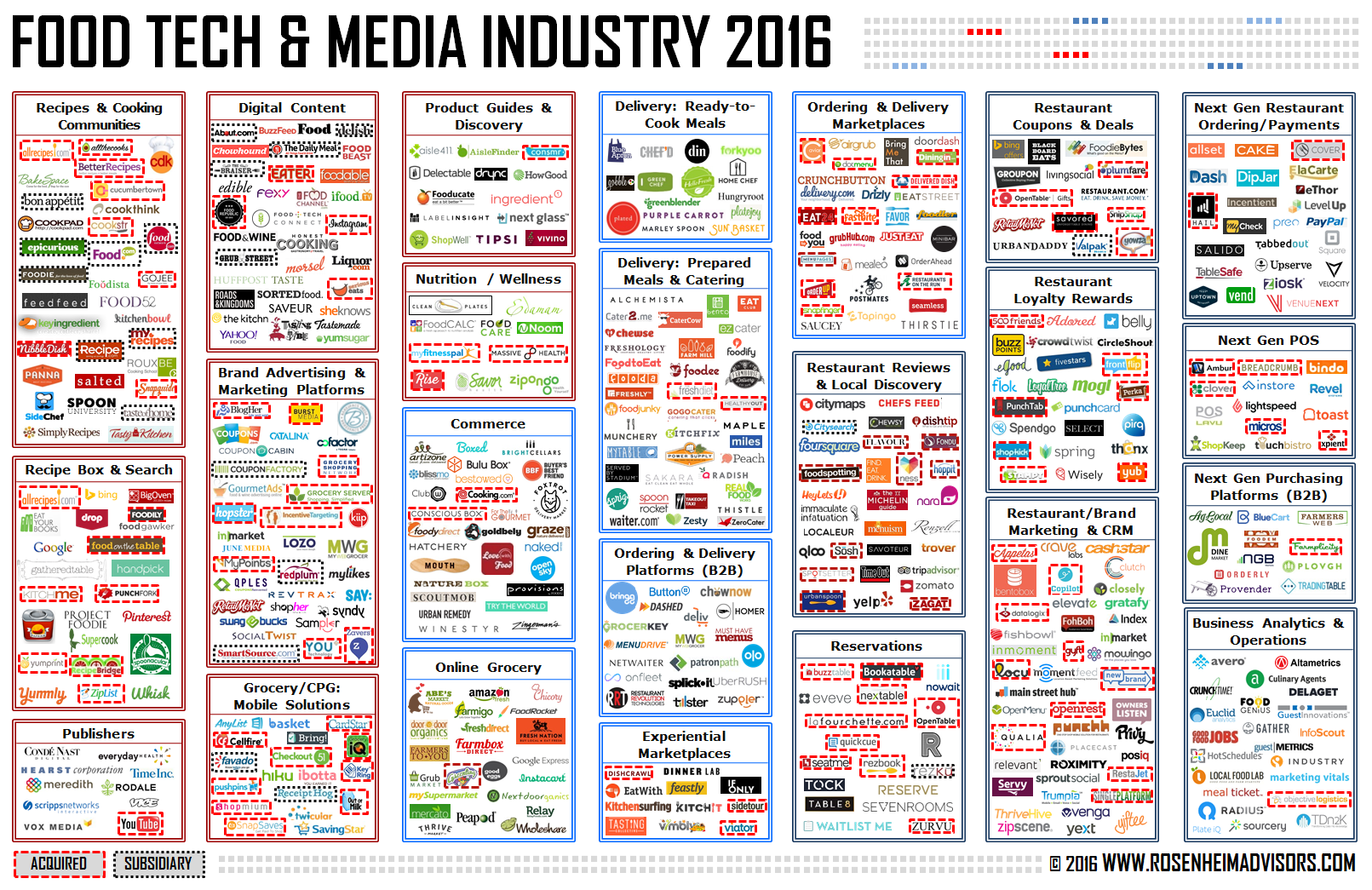 Despite market trepidation, the new year kicked off strong for the global food tech and media ecosystem with over $500 million invested (through 17 investments and five acquisitions) plus a freshly minted $3.3 billion for China’s Meituan-Dianping, securing the company a place within the top five unicorns at a $18 billion valuation. Within that, U.S.-based companies took in a little over $300 million in private company funding, and represented all but one acquisition.

On the M&A front, notably, three of the five deals were local grocery delivery services based in TX and CA. The largest, and only international, deal was restaurant guidebook publisher Michelin’s acquisition of Bookatable, estimated to be valued at approximately $122 million. As Eater and French startup blog Rude Baguette respectively note, “it’s certainly a major leap into the 21st century for the 127-year-old company” and “represents both a big step into digital for Michelin, as well as a change in the [mergers and acquisitions] mindset in France.”

Restaurant and meal delivery-related tech was overwhelmingly prevalent among the funding sectors both globally and within the U.S. Signaling a maturing industry, while there were a few early stage concepts, more than half of the investments were sized larger than $15 million.

Farmhouse Delivery Acquires Greenling and Urban Acres. With the acquisitions, the Austin, TX-based online grocery delivery service Farmhouse Delivery, which offers local produce items for weekly or biweekly delivery, will grow the team to approximately 50 workers and offer a subscription service to customers in the Austin, Dallas, Fort Worth, San Antonio and Houston areas. The company doesn’t expect to operate outside of Texas.

Next Glass Merges with Untappd. Untapped, a Los Angeles, CA-based mobile app that allows users to socially share beer with other users will enhance the platform for Next Glass, a Wilmington, NC-based mobile app for personalized wine and beer recommendations. Going forward, both apps will continue operating under their original names, and each have plans for new developments. As part of the merger, the co-founders of Untappd will join the Next Glass leadership team.

Michelin Acquires Bookatable. The London, UK-based online booking service and mobile payments platform is used by more than 15 thousand restaurants across Europe, allowing Michelin to become Europe’s leading digital service for restaurant reservations. According to Rude Baguette, Bookatable was seeing increased competition in Europe from TheFork (LaFourchette, acquired by TripAdvisor in May 2014) among others; however, the relationship between Michelin & Bookatable started as early as May 2013, when the two began their partnership, allowing booking of Michelin-rated restaurants via Bookatable.  With the acquisition, Bookatable plans to expand its new service to countries in Scandinavia. In case you are keeping track – Bookatable was previously known as Livebookings, as the two companies appear to have merged in 2007 (and before that, Livebookings was called Profitable.net).

GrubMarket Acquires FarmBox. The Los Angeles, CA-based organic grocery delivery service will expand the business of Grubmarket, a Newark, CA-based online marketplace where consumers can buy products from farmers markets, farms, and restaurants. The company plans to expand nationwide and according to an interview with Forbes, with the acquisition, the company will reach a total of 60 employees, expecting to double headcount, to 100-140 employees, by the year’s end.

Tinmen Raised Undisclosed Angel Funding. The Hyderabad-India-based food delivery startup sources meals from home cooks and delivers to offices and professionals, “like a virtual cafeteria.” According to Inc42, the capital will be used to serve a larger set of customers in Hyderabad and thereafter expand to other cities.

Black Garlic Raises Undisclosed Seed. The Jakarta, Indonesia-based meal-kit delivery startup is targeted towards middle class families and takes about 45 minutes to cook. According to Tech In Asia, the funding will be used to scale up the company’s operations in the Jakarta metro area, and to diversify Black Garlic’s offerings.

SheKnows Media Secures $22m Credit Facility. The New York, NY-based women’s digital media company operates as a platform where experts, bloggers, and social media influencers post content designed to empower women. According to AdExchanger, 75% of total ad revenue is connected one way or another with an influencer marketing campaign. SheKnows acquired BlogHer in November 2014 and had previously acquired a handful of female-focused publishers, giving it 92 million unique visitors. The credit line will be used for further acquisitions (focused on companies “empowering women”), as well as to enhance SheKnows Media’s Momentum Content Management System technology platform.

FiveStars Raises $50m. The San Francisco, CA-based platform for customer loyalty rewards provides rewards programs for restaurants and small businesses via mobile app. Programs track customer visits and include rewards such as discounts and coupons. To date, FiveStars has been used by over 10 thousand merchants and 10 thousand consumers. FiveStars will use the investment to continue to build the team, grow their brand and expand within the United States.

Olo Raises$40m. The New York, NY-based white label SaaS platform for mobile and online ordering and delivery integrates its services with restaurant’s point-of-sale systems to maximize sales and improve the customer experience. The investment will allow Olo to grow enhance its offerings, and expand its on-demand delivery platform, Dispatch. Dispatch facilitates access to a national network of independent Delivery Service Providers, collects real-time price quotes, chooses the best available, and extends the option to the consumer.

Boxed Raises $100m. The Edison, NJ-based ecommerce startup sells Costco-sized groceries and household goods online and via mobile app. Rather than taking market share form big box stores like Costco, BJ’s, or Sam’s Club, the founder maintains the company is converting a customer base of over 80 percent ages 25 to 44 to changing their habits to bulk buying instead of purchasing one-off. The company will use the capital infusion to expand the team, offerings and customer service operations.

Gather Raises $2.5m. The Atlanta-based event management software helps restaurants and venues manage and grow their private events business. Gather allows clients to respond to leads, manage their calendar, create and send proposals, collect payments and more. The company states that it is profitable, and will be using the funding for expedited product development, sales and marketing. The company employs about 25 and plans to double its workforce in the next 12 months.

Tovala Raises $500k. The Chicago-based smart kitchen startup automates home cooking through a new type of food tech appliance plus the delivery of premade meals. The company’s appliance, also called Tovala, utilizes a combination of dry and wet heat cooking technology instead of microwave technology, so users can cook several different types of foods in the same unit at the same time. Users can create their own recipes (and upload to the app for the potential to earn royalties), or they can subscribe to get fresh, chef-designed meals delivered to them weekly that are specifically developed for the machine.

ALICE Raises $9.5m. The New York, NY–based hospitality operations platform focuses primarily on hotels, and enables all front of house, back of house and guest communication needs to be handled in one platform. According to Skift, the new strategic investor allows the company to leverage Expedia’s database of hotel partners. The team will use the funding to “continue to build out the technology and significantly expand the team hiring sales, engineering, product, and account management roles.”

Meituan-Dianping Raises $3.3b. The Shanghai, China-based mobile app allows consumers to receive group discounts (similar to Groupon), order food from restaurants, and read and write restaurant reviews. The company, which has emerged as the largest player in China’s online-to-offline (O2O) market, was formed last fall after Meituan (backed by Alibaba) merged with Dianping (backed by Tencent). Meituan and Dianping still operate as independent brands.

Grain Raises $1.7m. The Singapore-based “Full-Stack” food delivery service manages the process from meal preparation and cooking, to orders and delivery. The company keeps its menu narrow with four different meals available each day on a selection that rotates weekly. According to Tech In Asia, the company plans to use the funding build up infrastructure and the team, including marketing and tech, as well as expansion to Hong Kong and beyond.

Foursquare Raises $45m. The New York, NY-based mobile platform for local discovery allows users to explore options for dining and shopping in cities via location-based information and reviews written by other users. The investment will be used to build out its enterprise business, including hiring 30 new positions across sales, engineering and other functions. The round is said to value the company at approximately half of the $650 million valuation it garnered with a $77 million Series D raise in February 2014, but in a TechCrunch interview the new CEO, Jeff Glueck, is careful to note that the financing round was oversubscribed.

Vivino Raises $25m. The Copenhagen, Denmark-based wine discovery app uses image scanning technology to identify wines consumers are drinking and offer suggestions based on users’ rating of the scanned wine. Vivino is currently used by 13 million consumers in 228 countries. The company plans to use the funding to further expand within the U.S., Italy, France, Spain, and Germany, and aims to have 25 million users by the end of 2016. Notably, the lead investor is strategic; SCP Neptune International, is the investment arm of Moet Hennessy’s global CEO Christophe Navarre.

FreshMenu Raises $17m. The Bangalore, India-based meal delivery service runs its own kitchen and offers main meals, salads, sides, and desserts cooked by professional chefs for on-demand delivery. FreshMenu currently operates in Bangalore, Mumbai, and Guragon and will use the investment for further expansion in India. The funds will also be used to build the brand and increase staff.

Toast Raises $30m. The Boston, MA-based provider of point-of-sale systems offers Android tablet point-of-sale systems for restaurants, bars, and other food establishments. The systems provided by Toast include customer loyalty information and are used by 1,400 establishments in 43 US states. The funding will be used to hire more employees, as well as for marketing and expansion across the United States. According to a TechCrunch interview, in 2016 the company plans on launching a suite of tools that allow Toast to integrate with other services.

Dipjar Raises $2.4m. The New York-based hardware and software startup provides digital tip jars and donation boxes for credit cards. DipJar manages the processing and disbursement of funds, while customers control the dollar amount setting and monitor their intake through the software dashboard. The company intends to use the funds to expand its national hardware presence and continue development of software solutions for customers.

UnderArmour, Inc. Teams Up With IBM incorporate the Watson supercomputer into its newest fitness and health-tracking app.