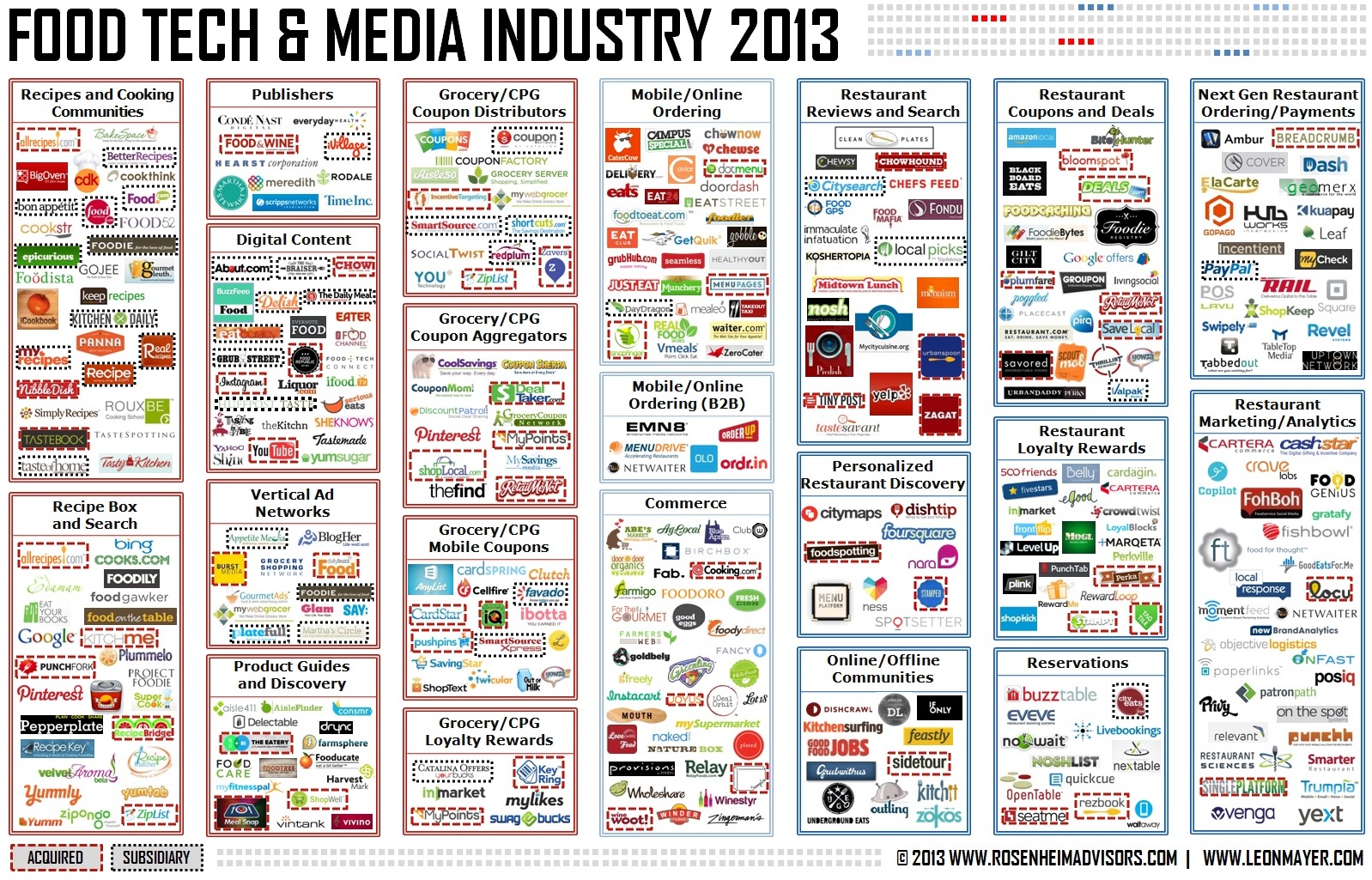 This monthly column highlights the most interesting acquisitions, financings and partnerships within the Food Tech & Media ecosystem – digital content, social, local, mobile, e-commerce, payments, marketing and analytics – to give you insights into the latest funding and growth trends.

The deal activity in October was moderate with five acquisitions, five early-stage investments (totaling $25.5m) and two later-stage cash infusions (Pinterest and Yelp – totaling $514m). Looking back over the past couple of years, investment volume has been slower in this space during the fourth quarter, so the next couple of months are likely to be light in activity as well.

An interesting alliance was announced in October that will affect a number of startups (and incumbents) in the restaurant deals, loyalty and marketing space. Named “The CardLinx Association,” the founding partners include Microsoft, Bank of America, Discover, Deem, Facebook, First Data Corp., Linkable Networks, LivingSocial, MasterCard, Affinity Solutions, CardSpring and Cardlytics. Their premise is that the deals/loyalty space hasn’t been able to grow to its full potential because consumers find it cumbersome to use the various coupons, vouchers and promo codes. This is partially related to the consumer hassles of prepaying, remembering to use them, and the varied ways to try to redeem them, and partially related to the merchant hassles of untrained staff and technical issues of redemption across platforms. The Cardlinx Association is aiming to make all those problems a thing of the past by promoting credit/debit card linked offers, and most importantly, developing universal interoperability standards to minimize friction in the sourcing, serving, publishing, redeeming and cross-syndicating of card linked offers.

One of the first projects resulting in this alliance is Microsoft’s revamp of their local offers program (however currently only in Seattle) to test the card-linked approach. After shutting down the “Bing Deals” daily deal aggregator earlier this year, and relaunching with “Bing Offers” in April, the (awkwardly-named) new program will be called “Bing Offers Card-Linked.” The deals are still aggregated from Groupon, Living Social, Restaurant.com, and a number of other niche deals sites. However, instead of having to print out a coupon, or show a QR code, users who link their credit cards to their Microsoft accounts will be able to redeem an offer instantly when they pay with the linked card at participating merchants. Obviously the idea of card linked offers isn’t new, but with universal standards across the numerous participants in the ecosystem it will hopefully be a more seamless experience and ultimately drive more value to both consumers and merchants alike.

Food52 Acquires Real Time Farms. Although the two companies entered into a significant partnership in August 2012, the food community/marketplace decided to formalize the partnership further by acquiring the crowd-sourced food and farm guide. Real Time Farms organizes user-sourced information and photos about farms, artisans and farmers markets, and will continue to do so after the acquisition, but will now be maintained by the team at Food52.

Anderson Press Acquires Caskers. The Atlanta-based family-owned group is a unique strategic acquirer for the ecommerce startup which sells rare, hard-to-find craft spirits. Pandodaily covered both the launch and (exclusively) the sale of startup, which explains that Harold Anderson (of Anderson Press) was one of Caskers biggest customers. Rather than raising money from venture capitalists or angels, the founders felt “Anderson was the only one who supported [their] entire vision” thus “instead of a venture investment, Anderson Press acquired Caskers outright.” In her coverage, journalist Erin Griffith touches upon the concept of whether VC investments are appropriate for certain corners of the food industry, “we tend to cover tech-focused companies that fuel hyper-growth with venture capital. But that’s not always the best path for every company… Caskers started out with the plan to raise venture capital, and then decided to do things a bit differently.”

First Data Corp. Acquires Perka. The global payment processor acquired the Portland, OR-based mobile loyalty startup which operates cloud-based location-aware loyalty programs for SMBs including restaurants and local businesses in the U.S., Canada, the U.K., Australia, Africa and Latin America. When a customer makes a purchase, they can “check in” using the Perka app or by sending an SMS text message. Merchants then validate the purchase, and consumers redeem accumulated points for selected perks. First Data is planning to use the loyalty platform to extend its own small business product portfolio, particularly around point-of-sale (POS) infrastructure, however the current team will continue to operate Perka as an autonomous subsidiary. The acquisition comes on the heels of First Data’s recent announcement that it acquired the mobile payments startup Clover last year (reportedly for $54.1m according to AllThingsD), and the debut of its new SMB POS platform (also called Clover), which will capitalize on the new loyalty solution.

eBay acquires Shutl. Although not directly in the food tech space, the growing same-day delivery landscape is becoming crowded with a variety of startups and incumbents like Amazon, Walmart, Google all going after the same-day opportunity, which has implications for numerous verticals with the food ecosystem. The UK-based courier marketplace will help expand eBay’s same-day delivery service, eBay Now, into London using Shutl’s infrastructure.

8coupons Acquires Clipless. The local deal aggregator, which allows users to peruse through a variety of deals from content partners like Groupon, Restaurant.com, GrubHub, eBay, LivingSocial, Valpak and more, plans to integrate Clipless’ mobile contextual technology and proprietary analytics into its existing platform. According to TechCrunch, both the Clipless Android app and 8coupons iOS applications will be “re-launching with a user interface makeover, designed to offer a better user experience, additional functionality, more intelligence, better content, and other improvements.”

Yelp Raises $288.9m in Follow-On Offering. The company took advantage of its increasing stock price (up 244% since the start of the year, from $19.70) to bolster its coffers through the sale of new shares (after spending close to $30m in cash over the past 12 months on acquisitions). Yelp announced it intends to use the net proceeds of the offering for working capital in addition to potential acquisitions in technologies, solutions or businesses.

IfOnly raises $12m. The San Francisco-based online marketplace for “Extraordinary Experiences” lists unique experiences with the world’s top talents in the fields of entertainment, food, wine, sports and more. As Gigaom notes, the company also bills itself as a “charitable emporium” – with each celebrity donating at least 10% to a charity of their choice for every item and experience sold. The company intends to use the funds to expand its marketplace.

Pinterest Raises $225m. The visual social media network has been aggressively expanding, and will use the additional cash infusion to launch in 10 more countries before the end of the year, as well as further investments and acquisitions of talent and technology. AllThingsD calls Pinterest “the ultimate personalized catalog of the digital age” which is why the company is a compelling platform for consumer marketers, advertisers, content companies and ecommerce players. Pins from the site drive a tremendous amount of traffic to other websites (for example, 58% of social traffic to Martha Stewart’s website came from Pinterest in the last six months), and according to Piqora, a pin generates 78 cents in sales, on average. Despite driving sales for other companies, Pinterest has yet to launch any revenue-generating products although it recently began to test ads, called “promoted Pins” which appear in search results and category feeds.

Real Food Works Raises $1.5m. The Philadelphia-based healthy meals subscription service delivers fresh meals cooked by a network of local independent restaurants, with a focus on plant-based, “real food” dishes. Dishes are offered in a rotating weekly menu of 25 different options (spanning breakfast, lunch and dinner), and for members interested in weight loss, they have an opportunity for weekly coaching sessions and to track their behavior and results a through an online portal.

Butter Systems Raises Seed Funding. The Los Altos-CA tablet-based menu startup is developing a system to allow restaurant customers to order food and drinks, or request their check without having to wait for their servers. Rather than other digital ordering startups in the space, they are not trying to replace the server, rather they aim to streamline the ordering process. The company is part of Y Combinator’s Winter 2013 class.

MyCheck Raises $4.2m. The Israel and New York-based mobile payment app for restaurants and other service sectors enables waiter-less checkouts at more than 3,000 venues worldwide. The company integrates directly with point-of-sale systems, and also provides a platform for marketing and advertising opportunities. The company will use the proceeds to expand its presence in existing markets and accelerate user adoption.

Tabbedout Raises $7.75m. The Austin, TX-based mobile payment app allows patrons to open, review and securely pay their tab. The fundraising roster included a strategic investment from Heartland Payment Systems, which also announced an integrated mobile payment partnership between the two companies (read more in “Partnerships” below). Additionally, Tabbedout has begun broadening its focus to include mobile marketing, and announced a new product which allows merchants to monitor customer use of the app, review customer purchase history and collect and respond to guest reviews. The financing will be used to accelerate the company’s growth and market penetration.

Partnership formed between Microsoft, Bank of America, Discover, Deem, Facebook, First Data Corp., Linkable Networks, LivingSocial, MasterCard, Affinity Solutions, CardSpring and Cardlytics to create The CardLinx Association. The association describes itself as a “new interoperability organization to enhance the consumer experience with local commerce and card-linked offers.” In other words, this alliance is meant to eliminate the hassle of vouchers and promo codes for local merchants and advertisers, and universally replace them with credit card-linked deals and incentives. Given the powerful players involved, this will likely create a dramatic shift within the deals industry, making it easier for startups (and incumbents) to integrate card linked offers into their strategy.

Heartland Payment Systems and Tabbedout form a strategic partnership to deliver an integrated mobile payment solution designed specifically for restaurant and bar operators. The two companies share the goal of creating a platform that provides an ad/marketing infrastructure for merchants and brands by aggregating customer data, including profile information, purchase history and feedback, to enable operators and brands to offer targeted rewards and incentives. The companies will enhance the Tabbedout platform with features such as alternative payment acceptance; multi-use tokenization for payment security; SKU-level gift, rewards and promotions; reservations and waitlist management; gateway and e-commerce solutions; and improved payments and business management. Tabbedout will leverage Heartland’s national sales force (800+ relationship managers) to increase distribution, however despite Heartland’s recent strategic investment in the company, the relationship isn’t exclusive. Tabbedout will continue to work with other payments and related companies to enable operators to work with the providers of their choice.

PayPal partners with iPad Point-of-Sale maker Revel Systems to expand “real world” presence. The most noticeable benefit of the partnership to consumers is that users can now use the PayPal app to order ahead when making purchases at participating Revel Systems retailers. PayPal has been focused on building up its offline presence with multiple POS relationships for the last couple of years, but recently beefed up its own proprietary hardware and software offering with its newly launched Beacon device and upcoming release of new mobile payments technology. However, as TechCrunch points out, the company is “not attempting to take on quickly growing Square and other competitors with in-house technology alone.”

GoDaddy partners with US Foods to help independent restaurant customers leverage technology and build an online presence. The partnership will immediately flex GoDaddy’s recent acquisition of Locu, which allows restaurant owners to manage and update their menu from one location, as well as distribute the menu to Locu’s content network (which includes Yelp, YP.com, Foursquare, TripAdvisor, Facebook, and more).