How Restaurant Delivery Startup Caviar Is Growing By 20% A Month 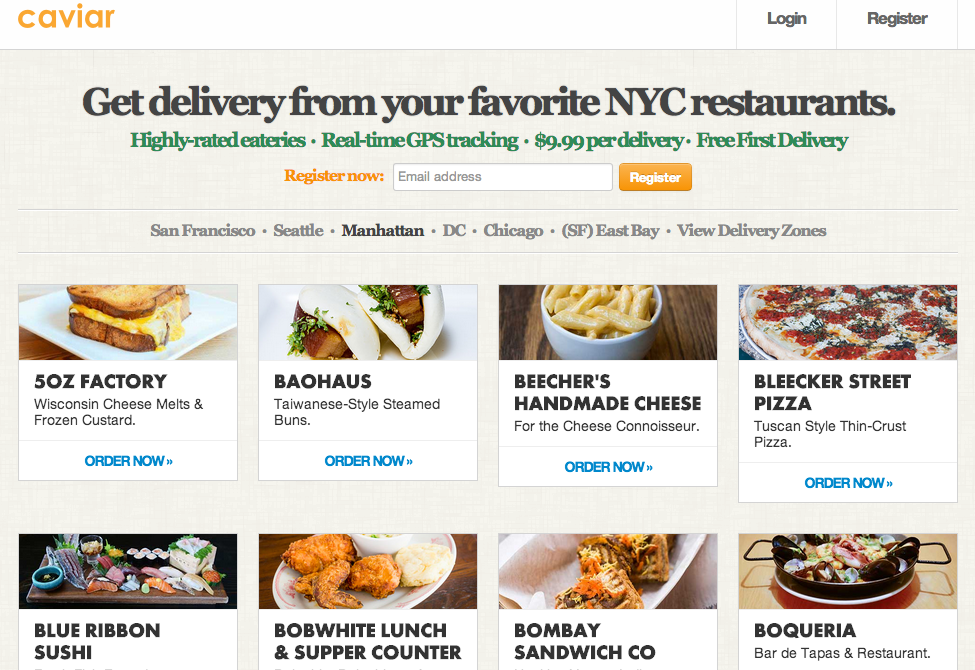 The food delivery space is beyond frothy. Startups like Sprig, Munchery and SpoonRocket (to name a few) are competing for market share with their respective takes on cheap, fast and healthy, on-demand food. And investors are pouring big bucks into these companies, one after the other.

Last month, San Fransciso-based Caviar, announced that it had raised a massive $13 million Series A round led by Tiger Global’s venture fund, with participation from Paul Buchheit, Andreessen Horowitz and Mixt Greens, one of its restaurant partners. The startup, which is seeing 20 percent revenue growth month over month, does things a bit differently than its competitors. It only partners with high quality restaurants that don’t normally deliver – like Momofuku Milk Bar, DBGB Kitchen and Mission Cantina – to offer speedy delivery of their menu items (18 minutes on average).

With 250 restaurant partners, Caviar will put the recent funding towards expansion into new markets, founder Jason Wang tells me. The service is currently available in San Francisco, Seattle, New York City, and starting a few weeks ago, Washington D.C., Chicago and the East Bay of San Francisco. Caviar plans to roll out to all major US cities by the end of 2014, says Wang. Sound familiar?

Caviar’s number one goal was to start making money from day one, Wang tells me. His team has always been focused on revenue and customer retention, rather than just user growth. And they’re doing pretty well on that front; Caviar sees 8 figure revenue annually and 80 percent of its orders are from repeat customers, which Wang attributes to the combination of Caviar’s curated restaurant selection, focus on customer service (every new hire is trained to do deliveries and customer support) and user experience, which includes professionally-shot food photographs and real-time GPS delivery tracking.

Not offering any discounts or promotions and working with high margins allowed Caviar to become profitable after three months of operation, Wang tells me. The 5-member founding team wasn’t actively seeking VC investment, but they realized that funding would help them grow faster. So the Y-Combinator graduates leveraged their network to raise a $2 million Seed round from Paul Bucheit, Ironfire Capital, Winklevoss Capital and Andreessen Horowitz, among others, in 2013.

For the most recent round, Caviar was only looking to raise $5 million, but there was so much investor interest that the startup bumped it up to $10 million, according to Wang. There was stiff VC competition for the round, which he attributes to Caviar’s growth rate and the fact the business became profitable with little capital. But his team decided to go with Tiger Global because its deal allowed for Caviar’s founders to remain on the board of directors. And talk about speedy, the fundraising process only took 2 weeks from start to finish.

As far as tips for food delivery startups seeking funding, Wang says now is the time to do it because on-demand is one of the hottest spaces. His suggestion: find a way to put your own twist on food delivery and get cracking on fundraising. “Last mile is now a part of major investor’s portfolios,” he added.