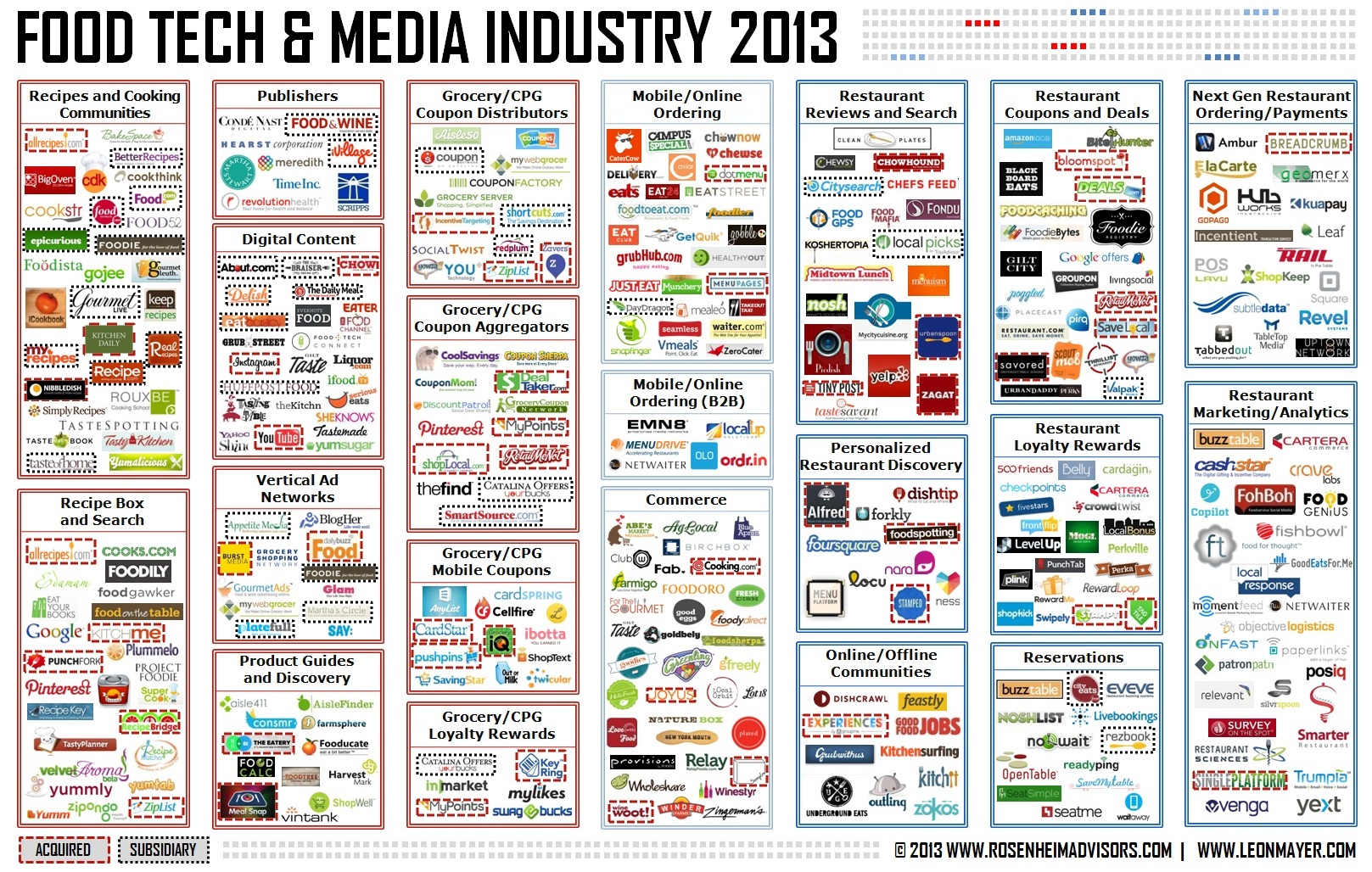 “Food Tech” investing has been a hot topic this past month, with perhaps the most discussed article being this New York Times piece focused on food startups. The article broadly lumped all food startup investments into one category, however mainly focused on consumable food products, and got some flak from industry players as one source expressed doubt over the long term-promise of food startups. The article also caps 2012 food tech investing at $350m, according to this CB Insights report. My data, however, reveals over $700m was invested in food-related tech and media companies (digital content, social, local, mobile, e-commerce, payments, marketing and analytics) in 2012 – which doesn’t include the numerous innovations in the agricultural, supply chain, nutrition and CPG spaces. Bottom line: we have only begun to scratch the surface of the food tech opportunity and continued innovation will lead to increasing investment in the space.

Meanwhile, the theme of  “delivery” dominated the news in April, as it did in February. Rather than creating a digital infrastructure for existing delivery services, a lot of the recent activity in this space has focused on leveraging existing systems and resources, like underutilized kitchen capacity or social and corporate networks, to create new products and services. Given the steep challenges with gaining meaningful traction among the pillars of the food space – restauranteurs, CPGs, grocers, producers, farmers – it will be key for many startups in the food tech industry to build products that harness existing infrastructures.

No M&A activity this month.

Relay Foods Raises $8.25m. The online grocery marketplace partners with local farmers and producers as well as grocery stores (including Whole Foods, and other national retailers) to offer a combination of local products and grocery staples that customers pick up at a central location in their city. The team has expanded market share in the Mid-Atlantic, and will soon be live in Washington, D.C. and Baltimore. According to TechCrunch, “the next major market – North Carolina – will take place in 2014.” The funding will used to power the build-out of a new mobile platform, expand the executive and development team, and redesign the company’s online marketplace.

HealthyOut Raises $1.2m. The company first launched as an app to help users find healthy, low calorie dishes at nearby restaurants and now, as it became a TechCrunch Disrupt Finalist, the team unveiled its subscription meal delivery service for New York City, with plans to expand to new cities soon. HealthyOut designed the subscription program, which sources meals from restaurant kitchens, to deliver up to 10 tailored meals a week based on health goals and flavor preferences, and charges a monthly fee to manage the orders and diets.

Plated Raises $1.4m. The NY-based meal kit delivery service, which compiles gourmet recipes from noted chefs and delivers all of the pre-portioned ingredients to make the meal, closed on a large seed which, according to VentureWire, was raised in two separate convertible debt rounds. A member of the current TechStars class, Plated is working to expand delivery regions and is actively growing its full time staff. TechCrunch points out that part of the seed funding was used to develop a new section of the site called “Social Recipe Pages,” which appears to be a cooking version of Rent The Runway’s “Our Runway” where users add tips and upload photos of meals they have made.

SavingStar Raises $9.1m. The digital grocery coupon and loyalty service enables shoppers to link deals to their grocery and drug store loyalty cards and then receive the rewards in the form of a cash payment, giftcard, or donate it to charity. Rather than aggregating deals, the company works directly with grocery stores to create exclusive deals. The round was led by corporate benefits provider Edenred, and as part of the strategic investment created a joint venture to integrate the SavingStar product into a healthy living rewards program, called NutriSavings (as noted in the “Partnerships” section below).

Kitchensurfing Raises $3.5m. On the heels of a $1m seed round in February to expand to additional metro areas, the private chef marketplace continues to grow its chef network, which includes nearly 1,500 chefs, as well as its funding. AllThingsD notes that the team currently vets chefs manually, but in order to scale, the team will need to use a portion of the proceeds to create a system where new chefs get approved via peer-review.

Chewse Raises $1m.  The LA-based B2B group delivery/catering platform distinguishes itself by presenting only high quality restaurants/dishes that it curates for its corporate clients rather than aggregating all catering options available in the area. Chewse also limits restaurants to those that already do catering and delivery, and have proved they can handle the demands of complex group orders. The team will use the new funds to expand its workforce and add new markets.

Eatclub Raises $5m. The lunch-ordering service has approached the task of feeding office workers in a unique way from other delivery options by limiting the selection to 10-15 dishes from three or four restaurants each day, and managing all of the operations logistics and delivery for the restaurants, including the delivery fleet. The team will use the funding to expand beyond the San Francisco Bay Area into other metropolitan areas around the US, although specific cities have not been mentioned.

Locu partners with Yelp. The digital menu company will integrate Locu-managed menu information to augment Yelp restaurant listings with real-time menus and prices.  It is actually surprising that it has taken Yelp this long to incorporate menus in a meaningful way, and this partnership will be a boon to operators and customers alike.  As we noted last month, this partnership comes on the heels of Locu’s recent WordPress integration.

LevelUp and Merchant Warehouse partner to launch $1m fund to encourage developers to build mobile-payment apps.  The co-sponsored development fund was created to encourage more developers to build apps leveraging LevelUp’s mobile payments platform. Qualified merchants will receive a sponsorship of 25% of the cost of a custom-developed LevelUp White-Label mobile payment and loyalty app. As The Next Web notes, Sweetgreen, small chain in the DC area, was the first company to take advantage of this service in February with its Sweetgreen Rewards app.

Mobile restaurant payment app TabbedOut partners with Harbortouch POS system. The new integration will allow Harbortouch terminals to accept mobile payments, and will be installed on all future HarborTouch POS systems, with the option to install on existing terminals as well. Partnership with POS companies  is essential to the growth of TabbedOut, and over the past couple of years, the company has partnered with Micros, Aloha, Future, Focus, Dinerware, Digital Dining, and Jumpware.

Recipe Kit Service HelloFresh Partners With Weight Loss App Noom.  Noom users will now be able to integrate their diet plan into HelloFresh’s delivery meal service, so they can make calorie appropriate meals from scratch in under 30 minutes, and have the info automatically uploaded in the app. As TechCrunch points out, this is “essentially a white label version of HelloFresh inside of the Noom app,” as Noom is taking responsibility for managing both the partnership and the customers and shares revenue with Hello Fresh for each purchase.

Pizza Hut teams up with Microsoft to create an Xbox Live app where gamers can order pizza directly from console. Kurt Kane, chief marketing officer at Pizza Hut, positioned the partnership as a family-focused move, “With today’s avid gamers and busy modern families gathering around their gaming consoles as much as they gather around a dinner table, we felt this was a natural next step for Pizza Hut as we continue to own the digital ordering experience for pizza lovers everywhere.” As the first tangible good ever made available via the Xbox Live platform, it show an interesting potential for the merging of food and technology. However as Forbes points out, the app is more of a gimmick than a solution, as gamers need to exit out of the game in order to order the pizza – which is not as convenient as just picking up the phone or other online ordering options.