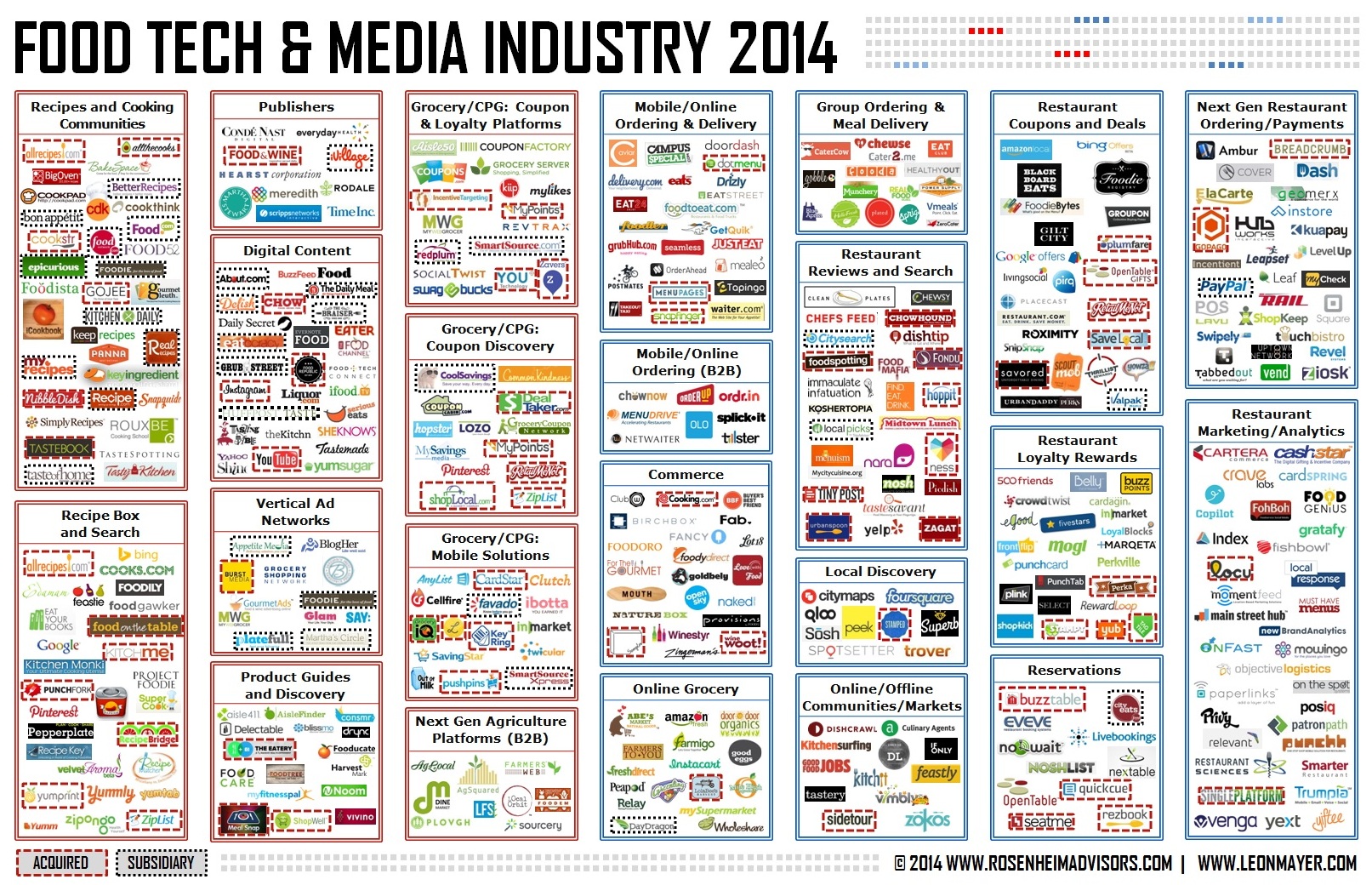 The first quarter of 2014 closed out with over $300 million of private investment in the food tech and media sector ($100m in March, 12 deals), and twelve notable acquisitions (four in March). As with last month, there was a noticeable shift towards larger Series A and Series B rounds in March, with only three Seed stage deals and an average raise of $8.3 million.

There has been a lot of talk about the momentum of food tech in the press, here are a few good reads. Also in the news, an addition to the IPO pipeline was unveiled: GoDaddy (which has been increasingly focused on – and acquiring – services for small local businesses) is reportedly preparing to file for an IPO, according to the NY Times.

Four companies entered the public markets since the beginning of March, representing a combined $6.1 billion of market capitalization (at offerings). GrubHub and Coupons.com were both embraced by investors, as the former priced above the upwardly-revised $23-$25 range at $26, and closed up 30.8% on the first day of trading, resulting in a market cap of $2.7 billion. Coupons.com also priced above the $12-$14 range at $16, and popped 87.5% in the first day of trading to close at a market cap of $2.1 billion. Everyday Heath has seen mixed reactions, as the stock dipped 3.6% below the IPO price on the first day of trading but has recovered to hover close to the offering price of $14, and Just Eat’s stock (on the LSE) has been trending down since the IPO.

The industry was abuzz this month with developments around mobile and location-based technology, as a number of incumbents are finally implementing mobile initiatives at an increasing pace. Wendy’s and Burger King both rolled out mobile payment options, and McDonalds is continuing to test the feature. PayPal continues on its mission to liaise between the online and offline worlds with its new plan to connect mobile ads to in-store visits through a partnership with Placed, a mobile location tracking firm.

TripAdvisor announced plans for a mobile travel guide, as it faces increasing competition from Foursquare and Google Now. Speaking of Foursquare, the company launched a new Twitter ad product that that invites users to tweet marketing messages when they check into businesses (which requires a minimum campaign commitment of $100k). And on that note, Instagram (which is owned by Facebook), recently began testing integration with Facebook Places, Facebook’s local venue database, to potentially replace Foursquare in the future.

Editors Note: A previous version of this article did not include the Mobivity/SmartReceipt acquisition.

XO Group Acquires Gojee. The New York-based recipe and fashion aggregation website was acquired by XO Group, the umbrella group for women-focused sites like The Knot, The Bump, The Nest and Wedding Channel. The Gojee website will remain post-acquisition, however sans the fashion component, as it appears the food vertical was the compelling draw. TechCrunch reports that “the Gojee team [will] work on refreshing all of XO’s dated web properties, with a specific focus on updating the mobile experience.” Also according to TechCrunch, the company had explored sales to several other companies including Yahoo, Buzz Feed, Yelp and The RealReal.

Mobivity Acquires SmartReceipt. The Santa Barbara, CA-based “smart” receipts SaaS provider transforms traditional restaurant and retail transaction receipts into coupons and offers, and post-acquisition will expand Mobivity’s software deployment to over 17,000 restaurant and retail locations. Rather than integrating directly into POS systems, SmartReceipt bypasses the POS by transmitting printed receipt data to the cloud and enabling businesses to store transactional data and dynamically control the receipt content in real-time. Mobivity plans to integrate the SmartReceipt solution with its SMS marketing technologies, as well as the loyalty solution, Stampt, which Mobivity acquired in December 2012. Additionally, the company may further integrate the technology beyond its current use to assist retailers to continue to retain their most loyal customers.

Just Eat Acquires Meal2Go. Weeks ahead of its IPO, which valued Just Eat at £1.47 billion ($2.44 billion), the UK-based food ordering startup acquired a U.K. restaurant tech company that created the first electronic point-of-sale (EPOS) system for managing takeout orders in the independent restaurant sector in the UK. While the acquisition only adds 1,100 Birmingham-based restaurants to Just Eat’s existing partners, it allows Just Eat to expand the reach of the EPOS technology throughout the 13 countries in which it operates, something that could give it a leg up on competitors like Delivery Hero and FoodPanda.

Kitchensurfing Raises $15m. The worldwide community marketplace enables consumers to connect directly with both professional and amateur chefs to hire them for a variety of occasions, including family meals, celebratory meals, exotic cuisine or in-home cooking classes. In an exclusive, Fortune‘s Erin Griffith offers some thoughts to the momentum behind Kitchensurfing, which includes increasing investor appetite for the food category (as we have been documenting), but also the “celebritization” of chefs by a growing number of consumers, as well as the Airbnb effect which has “made people more comfortable conducting real-world transactions with Internet strangers.” The new funding will be used to expand into new geographies and grow its community of chefs and diners.

Ricebook Raises $7m. The Beijing, China-based social mobile app helps users take photos of their food, and then share them with friends over social networks such as Sina’s Twitter like service, Weibo. It also helps users find restaurants nearby. The company says it will use the proceeds on staff expansion and general operations.

Sprig Raises $10m. The San Francisco-based subscription food delivery service makes and delivers locally sourced meals to local customers. One of Sprig’s distinguishing factors is that customers don’t need to order days or hours in advance; the company’s goal is to deliver the meal 20 minutes of ordering, on average. The new funding will be used towards the customer experience for customers in San Francisco, expansion to new markets and for hiring. According to PandoDaily, the investor interest interest in Sprig signals a larger trend; “Greylock’s investment represents big things and not just for Sprig. It’s eight figure validation of the nascent food preparation and delivery startup realm as a whole… If other investors weren’t paying attention to these companies, they’re going to sit up and take notice now.”

CircleUp Raises $14m. The San Francisco-based equity-based crowdfunding platform helps accredited investors find free access to private consumer-focused investments, making it easier for investors to identify, diligence and back companies they understand. Circleup focuses on food, personal care, pet product, apparel or retail/restaurant companies with $1-$10 million in revenue, which are looking to raise $100,000 to $2.0 million in growth equity. In addition to the fundraising platform, CircleUp has struck up some interesting partnerships, including a recent one with Virgin America to help identify new snacks and drinks to serve on flights. The company plans to use the capital for hiring, and to build new tools and services that will help investors and entrepreneurs make sense of what comprises a typical valuation in a consumer goods company within their category.

TouchBistro Raises $1.5m. The Toronto-based startup is a provider of mobile point-of-sale solutions and digital menus for the food and drink industry, and recently opened a NYC office. TechCrunch reports the company is targeting a “full doubling of its existing customer base (i.e., 2,000 plus clients) on the books by the end of next year.” The additional cash infusion should help the startup expand its offerings, with a planned San Francisco office opening later in 2014.

Vend Raises $20m. The Auckland, New Zealand-based online point-of-sale software provider provides an HTML5 retail POS that works on any device or platform, enabling retailers to process sales, track inventory and manage customers. The software is currently in over 10,000 stores, in more than 100 countries, and the new funds will expand Vend’s presence in the North American market through new partnerships, customers and staff, as well as globally. The company is also expanding its channel of resellers and building on their list of industry partners, which currently include PayPal, Xero, Stitchlabs and Swarm.

Crowdtap Raises $5m. The New York-based social influence marketing platform provides a SaaS platform that allows marketers to influence conversations about brands (including Nestle and Kraft) across social media by inspiring crowds of consumers to create quality content and provide real-time insights. The company intends to use the funds for product expansion and hiring.

Meican Raises $10m. The Beijing-based online food ordering service, which can be translated from Chinese as ‘the meal network’ or ‘good meal’ (depending on the source), features nearly 30,000 restaurants in Beijing, Shanghai, Guangzhou and Shenzhen. The company intends to use the funds to recruit people, improve products and add merchants. In conjunction with the funding, David Tang, director, general manager and partner of Nokia Growth Partners, will join the board of directors. Notably, there seems to be a scramble among prominent investors for the next Grubhub Seamless of China, as Sequoia Capital and Matrix Partners invested $25m into Ele.me, and Highland Capital Partners invested $10m into Etaoshi in November of last year.

Flypay Raises £1M. The London-based mobile payment startup allows users to check, split and pay their restaurant bill from their smartphones by scanning an on-table QR code/NFC tag to pull up the bill. The company will use the new capital to scale its technology, acquire new restaurant partners and further develop its product line.

PayPal partners with Placed to Connect Mobile Ads to In-Store Visits. PayPal has linked up with mobile location tracking firm Placed to connect the ads served through the PayPal ad network to real-world store visits. Placed has a panel of around 125,000 app users who agree to have their mobile location data tracked in exchange for gift cards, contest entries and other goodies.

GoDaddy Partners With Dwolla On New E-Invoicing Option For Small Businesses. Web host and small business service provider GoDaddy is teaming up with payments network Dwolla, to offer GoDaddy’s business customers an alternative to paper checks and competing online payment services like PayPal when invoicing their customers and vendors.

Fitbit Partners with HTC to Preload Their Fitness Software on All New HTC One Devices. The partnership allows HTC to offer Fitbit on the One in two ways: it can work instantly with the on-board suite of sensors HTC provides to track fitness levels without any additional hardware, or device owners can opt to buy some Fitbit hardware (including its scales and wearables) to increase the accuracy of the health tracking fed to the One.

WePopp Adds Restaurant Booking Via OpenTable. The new restaurant-booking feature within the WePopp app, which was created to help users plan events with friends, suggest three restaurants from OpenTable (although you can still add any restaurant of your choice), and once confirmed with the intended participants, users can convert that “popp” into a booking. WePopp has a similar affiliate arrangement for flights (Skyscanner) and hotel bookings (Booking.com).