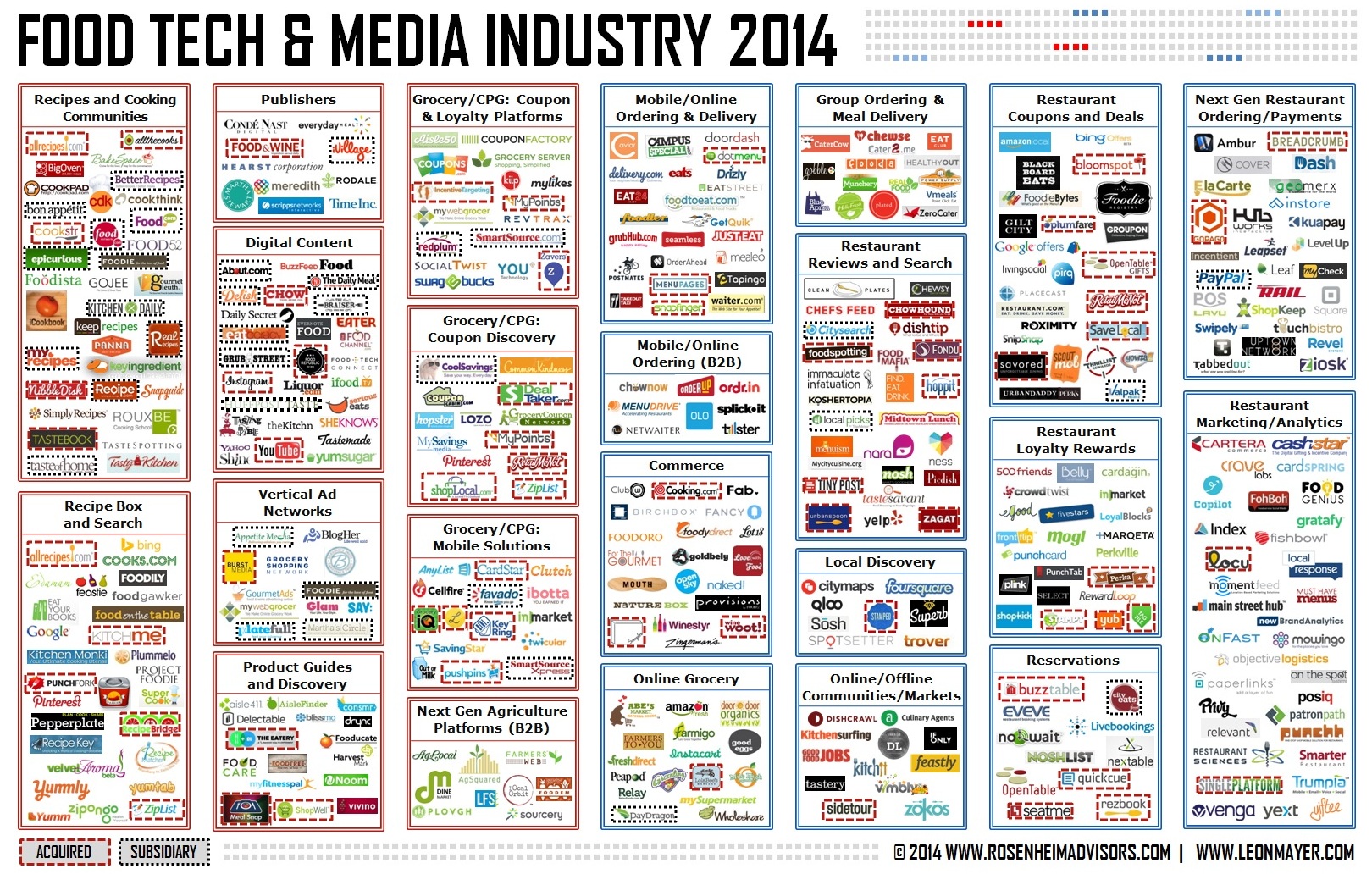 We kicked off the new year with a flurry of private market investments in the food tech and media space, totaling $127.3m for the month of January across eleven deals, and two notable acquisitions. A majority of the companies were focused on the restaurant and hyperlocal sectors, joined by two commerce startups and two ag tech companies.

In terms of public market activity, 2014 has brought a tidal wave of developments on the IPO front with three initial IPO filings already on the books (GrubHub Seamless, Coupons.com, Everyday Health) and a confirmed process underway (Gilt Groupe). With at least two other companies likely to follow (Pinterest, Jawbone), this will be a meaningful year for the ecosystem, especially if you consider that there was only one IPO related to the food tech and media space in 2013. Of note, the markets were anticipating a 2014 IPO from Square as well, but it has been reported that offering will likely be pushed to next year.

For all you data and trend junkies who aren’t familiar with the maze of content that is included in an IPO prospectus, you can always count on the “Business” sections to be chock full of information on the industry, competition, business segments and key metrics. Here are the direct links to the Business section for GrubHub Seamless, Coupons.com and Everyday Health.

As I noted in the annual trends report, in addition to validating overarching trends related to the food tech and media industries, successful IPOs among the 2014 cohort will directly impact startups in the space as the public markets will unlock a new acquisition currency. Between GrubHub Seamless, Coupons.com and Everyday Health, each company explicitly discussed acquisitions as part of their continued growth strategy, with Grubhub Seamless the most specific about key drivers, which include “expansion opportunities in existing and new markets, as well as in core and adjacent categories.” A rising tide lifts all boats, and as more opportunities for successful exits (via acquisition) become available, it is likely that investors will continue to increase their stake in this sector.

Macmillan Publishers Acquires Cookstr. The NY-based recipe website differentiates itself by featuring recipes exclusively from cookbooks and acclaimed chefs. Macmillan plans to utilize Cookstr to provide new ways to grow its cookbook authors’ audience and to reach recipe fans directly. In addition to Cookstr.com, the company powers recipe searches in partnership with other organizations, and it will continue to operate independently after the acquisition.

Leapset Acquires Buzz Table. The NYC-based mobile CRM and waitlist platform for restaurants joined the Sysco-backed restaurant and merchant POS platform to bolster the cloud-based suite of ordering, payments and loyalty/rewards. Leapset has a powerful partner in Sysco, especially as the distribution giant looks to deepen and further monetize the relationship with restaurants. Leapset is currently available in restaurants in California, with select locations in Florida as well. According to Business Times, the Redwood City, CA/Sri Lanka-based cloud POS system intends to continue growth through technology acquisitions throughout 2014.

GetYourGuide Raises $4.5m. The Berlin-based global booking platform for local activities and tours, such as Electric bike tours around Paris or cooking classes in Thailand, extended into the US market late last year, and opened an office in Las Vegas, NV. Similar to an “Open Table for booking activities,” in an interview with TechCrunch, the founder points out that the business model depends on a platform that offers additional consumer value beyond just choice — such as best price guarantees, fast lane access to museums and last minute availability for mobile bookings. In addition to growth funds, the strategic Series A expansion brings on two new board members – Kees Koolen, former CEO of Booking.com and also (since 2012) an advisor to Uber on scaling globally, and Fritz Demopoulos, founder and former CEO of Chinese-language travel info portal Qunar.com.

Yiftee Raises $2.1m. The Menlo Park, CA-based hyperlocal social gifting startup allows users to send gifts from local restaurants and shops throughout the U.S. Rather than focusing purely on the consumer market however, the team saw a trend of businesses using the service as sales gifts, employee rewards, etc, and plans to capitalize upon the corporate angle. The new funding will be used to expand Yiftee Pro, as well as look to Asia for potential business opportunities.

Food Genius Raises $1m. The Chicago-based big data startup provides industry insights and analysis to the food industry, including restaurant chains, convenient store and grocery retailers, consumer packaged goods manufacturers and food distributors. Food Genius currently derives insights through menu and pricing data, using its algorithms to parse the information which then allows suppliers to see and predict what’s most in demand, for example, or help restaurants figure out what their competitors are doing. While the company closed the round in September of last year, the funding was made public this month in Crains Chicago Business, which noted that a large part of the new investment will go to “sales, focusing on things such as actively managing existing accounts to mine them more effectively, and building technology that can automate some parts of selling”.

Drizly Raises $2.25m. The Sherborn, MA on-demand alcohol delivery startup allows users to order beer, wine and liquor through the Drizly app, and have it delivered to their doorstep in Boston and NYC within an hour. In addition to customer convenience, the company’s turnkey solutions provide retail stores a simple and secure way to offer responsible on-demand delivery (delivery drivers authenticate and validate IDs). Drizly will use the funding to fuel its growth, with plans to reach more customers and U.S. cities in the next six months, according to a release.

Venga Raises $1m. The Washington DC-based restaurant CRM platform links restaurants’ point-of-sale systems with reservation systems such as Open Table. By merging reservations data and point of sale information to create a customer profile, Venga helps restaurants tap into guests’ habits and preferences. The company intends to use the funds to scale their sales team and develop a CRM product for the casual dining market.

FarmLogs Raises $4m. The Ann Arborm MI-based farm management software and mobile app developer helps farmers digitally manage their farms in order to increase yield and profitability. According to a release, the product is now being used by over 5 percent of row-crop farms in the US, as well as 131 countries -an impressive feat – and the company will use the funding to expand the team and roll out an “aggressive product roadmap for 2014.”

Culinary Agents Raises $500k. The New York-based professional networking and job matching site is designed specifically for the food, beverage and hospitality industry. Similar to LinkedIn, users (talent) create a free profile (resume) that allows them to showcase their experience, education, skills and other professional accomplishments. Business users may claim and create business profiles (for free), post jobs, and receive automatic matching, streamlined views of resumes, messaging and other applicant management features. The funds will be used to continue to grow the product, including features around job matching and applicant management, in addition to building further professional networking and mentorship aspects into the platform. Check out our full interview with the founder, Alice Cheng, here.

Delivery Hero Raises $88m. The Berlin, Germany-headquartered global network of online food ordering marketplaces offers its services predominantly in Europe but has also expanded to Australia, South Korea, China, India and Mexico. Although the company turned a profit last year, TechCrunch reports that profits are not a priority, and the company plans to “go back into the red because of ‘big investments'” on the horizon as it continues to rapidly scale in its current markets (no plans to enter the U.S. market at this time).

Plated Raises $5m. The New York-based subscription service for ready-to-cook meal ingredients and recipes delivers weekly-changing boxes to prepare locally sourced, healthy meals. The company works with a range of vendors and shipping partners, rather than holding vast amounts of inventory like a traditional grocer, and currently delivers to 90% of the US. The funds will go towards growing the team, especially engineers, regional distribution managers and quality control professionals, reports The Wall Street Journal. Interestingly, the WSJ also notes that the company has also tested out marketing programs, featuring samples of branded products from Chobani, Walkers Shortbread Cookies, OXO (makers of cooking tools) and Johnson & Johnson in its meal kits. Check out our full interview with co-founder, Nick Taranto, here.

Ordr.in partners with Microsoft for SDK and Delivery.com to expand restaurant network. With the partnerships, the Ordr.in API will access Delivery.com’s portfolio of over 10,000 restaurants. Additionally, Ordr.in has opened its entire platform up to the developer community, and as a result, Microsoft partnered with Ordr.in to build a Windows Phone SDK and reference app.

Micros Systems partners with Dell, Intel and Microsoft to introduce tablet-based sales systems customized for the food and beverage, retail and hotel industries. As a growing group of start-ups and established tech companies are competing to provide mobile point-of-sale services, pressuring Micros to evolve from desktop computers to mobile devices, particularly tablets.

GrubHub Seamless and HBO collaborate on food personality profiles and promotions to celebrate the third season of HBO show GIRLS. In addition to offering promotions, including a video Instagram contest, Free Grub and discount opportunities, GrubHub Seamless and HBO identified the food profiles of America’s favorite New York City twenty-somethings by considering personality traits and food moments in the show’s first two seasons. Upon execution of the promotion however, the Seamless site faltered, apparently under predictable heavy ordering around the NFL playoffs and The Golden Globes, wiping out hours of HBO’s promotion.

Foursquare partners with GrubHub Seamless to order delivery from nearby restaurants within the Foursquare app. Participating restaurants show an “Order Delivery” menu item alongside links to view the restaurant on a map, call or see its menu in the in-app listings. The best way to find restaurants that feature this integration is to search for the type of cuisine followed by “delivery” within Foursquare, the company notes.

NoshList App integrates into the new Clover POS. As one of the first apps available on the Clover app marketplace, Noshlist partnered with the open POS platform (which was acquired by First Data last year) to integrate the wait list management functionalities into the platform.

MapMyFitness partners with MyFitnessPal to provide API integration. MapMyFitness, the fitness app suite recently acquired by Under Armour, and MyFitnessPal, an online and app-based wellness tracking platform, have announced an integration, allowing users to sync data between the two platforms.