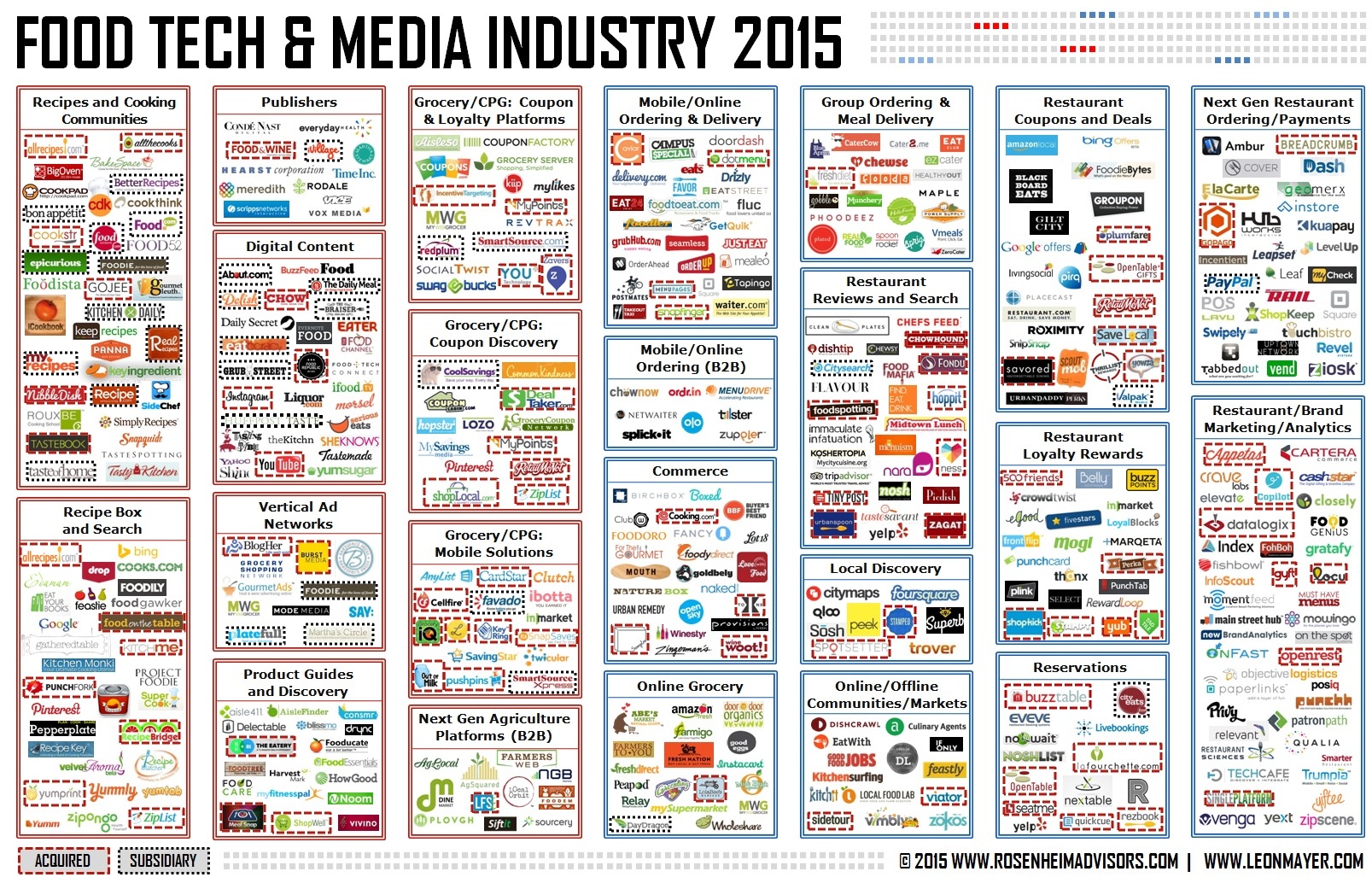 The U.S. food tech and food media industry continued to grow in 2014 with a total of $2.4 billion of private capital invested into the ecosystem – 42% greater than 2013’s $1.7 billion, and twice as much as 2012’s influx of $1.2 billion. Additionally, four food tech and media companies – Grubhub, Coupons.com, Just Eat (LSE), and Everyday Health – entered the public markets in 2014, representing a combined $6.1 billion of market capitalization (at offerings).

Excluding fund raising by the more broadly-focused internet companies Pinterest, Square and Evernote, in 2014 there were 103 U.S. private company investments in this adjusted group, which funneled $1.9 billion into the space, almost doubling the investments of the adjusted group in 2013 (see Footnote (1) in the chart below for further details on the “Adjusted Group”). The Catering Marketplaces and Meal Delivery category was most active, with 13% of the total number of funding events, while the Online Grocery category brought in the most cash with $313.5 million in private funding (excluding the CPG Coupon category, which was boosted by ABRY Partners’ significant investment into Inmar). 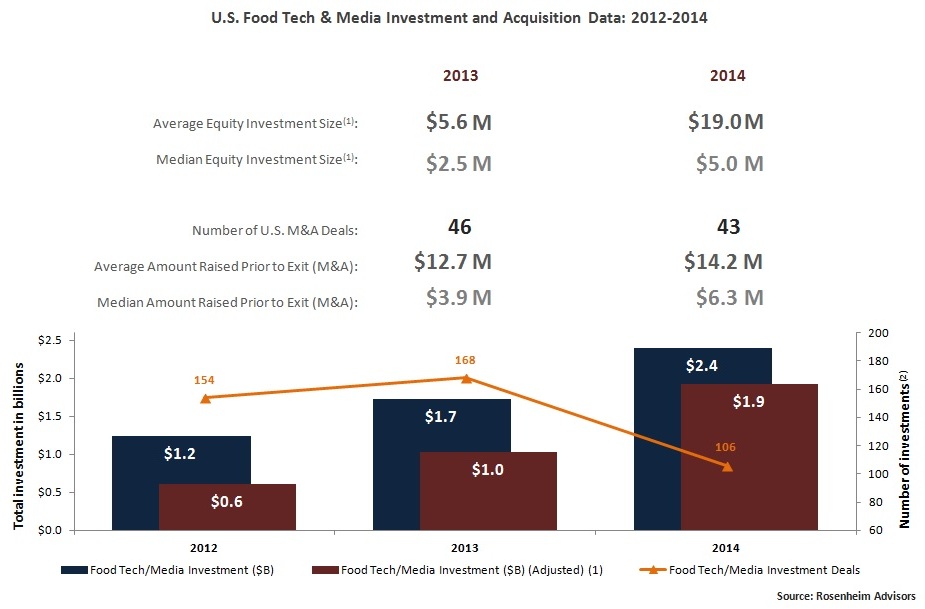 Source: Rosenheim Advisors.
(1) Adjusted; excludes investment data for: Evernote, Fab.com, Instagram, LivingSocial and Pinterest.
(2) Does not include M&A deals.
Note: Data for U.S.-based companies only, and reflects the sectors found in the Food Tech and Media Industry Map. Investment data does not include any M&A data or public market offerings. Due to new company and funding updates, the 2012 and 2013 data reflected in this chart does not equal the data provided in the 2013 Food Tech Media Funding & Acquisition Trends Report.

Growing Capitalization as the Industry Continues to Evolve

Noticeably, there was a sharp decline in the number of fundraising deals in 2014, dropping from 168 deals in 2013 to 106 deals in 2014. This is in part due to food tech companies (and their business plans) continuing to evolve from thesis-testing and market validation to building a scalable model and expansion, thus attracting a wider variety of institutional firms which are participating more frequently, in larger and later-stage investment rounds. Case in point, in 2014, 39% of private investment deal sizes in this space were $10 million or larger, versus 20%, 18%, and 19% in 2013, 2012, and 2011, respectively.

Source: Rosenheim Advisors.
Note: Data for U.S.-based companies only, and reflects the sectors found in the Food Tech and Media Industry Map. Investment data does not include any M&A data or public market offerings.

This trend was also seen on the M&A front, with a broad set of technology and media incumbents looking to the food vertical to bolster business, ranging from existing industry players (including Kroger, Open Table, Scripps, Trip Advisor, and Yelp) to strategics that previously had little exposure to the food ecosystem. Significant examples of the later include Oracle’s acquisition of Micros Systems and Datalogix, as well as Priceline’s acquisition of OpenTable.

As the sector evolves towards increased institutionalization and consolidation, heavyweights in the tech industry will continue look to food innovators in order to increase market share and layer in new revenue streams and services. This impacts early stage companies as well, as I think the rise in incumbents – both traditional and digital – focusing on this space will likely create additional exit paths for the variety of startups that will ultimately require a larger platform to survive.

Further, while some consolidation has already begun, I think 2015 will be a year of opportunity for established companies looking to expand their geographic empires in this space (as seen by the tremendous international acquisition activity in the restaurant delivery/discovery vertical). For additional thoughts on the upcoming year, check out Street Fight‘s take on the likely priorities of potential acquirers, as well as Food + Tech Connect’s 2015 Food Trends piece.