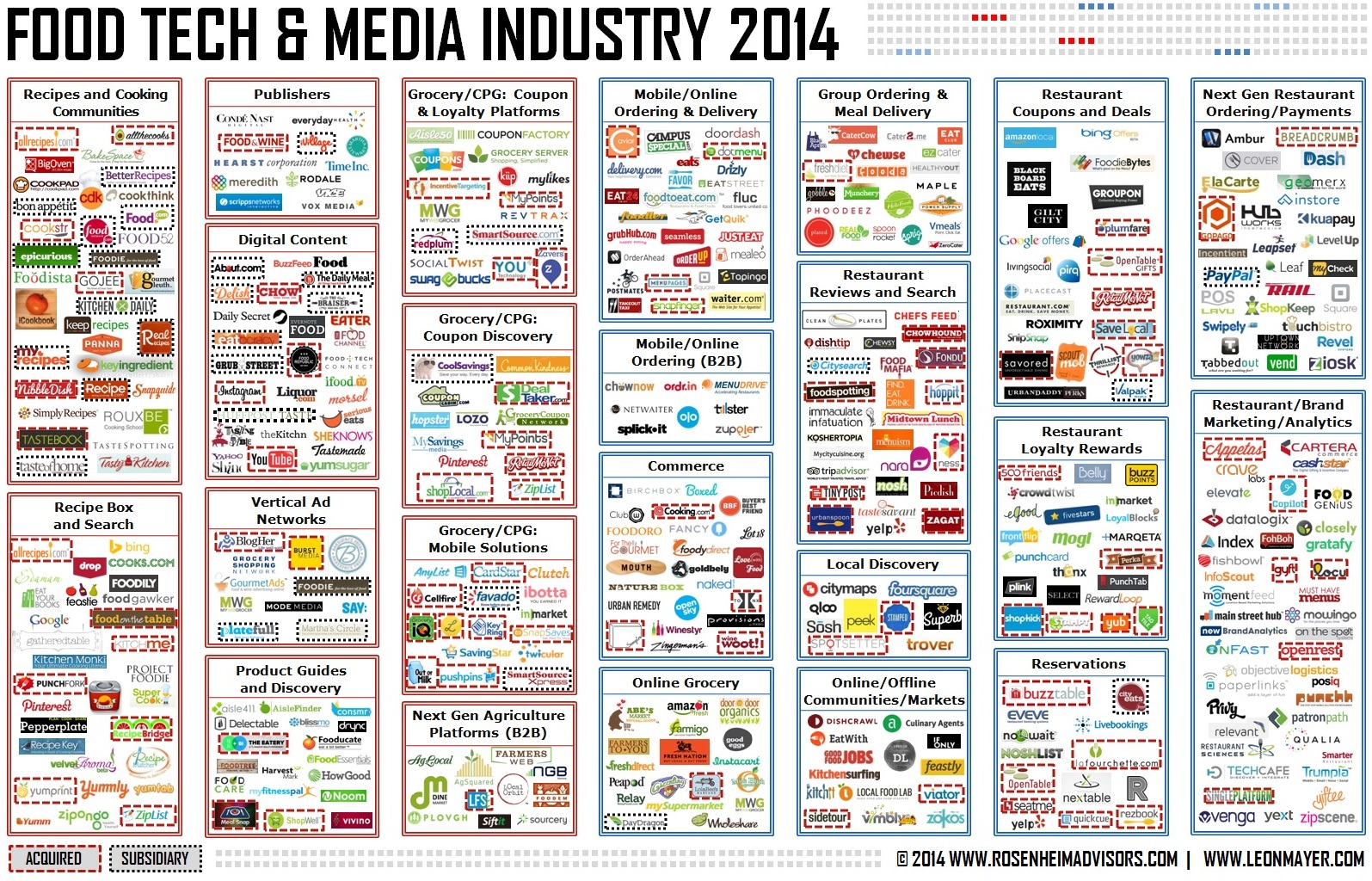 November saw a lot of international investment into the food tech space with almost half of the funding flowing to other continents (both in terms of deal and dollar volume) and ten of the twelve M&A deals occurring abroad (albeit nine of those deals were concentrated between two acquirers). Overall, more than $260 million was invested into the food tech and media ecosystem in November, with a heavy leaning towards ordering and delivery (particularly in the restaurant space).

The trend of traditional food brands and companies expanding their technology footprint continued to make headlines throughout the month, with Walmart adding product search to the in-store experience (with real-time inventory location and availability) and Domino’s announcing that company’s biggest single department is IT (beyond ordering and tracking pizzas, customers can now order a pizza from inside the control panel of the Ford Sync in-car entertainment system). Brands (even non-food brands) are increasingly using food imagery on Instagram as part of their marketing endeavors, and inMarket says its beacon platform now reaches 18% Of US mobile shoppers in brick & mortar stores – with many of them in food and grocery establishments.

On the other side of that coin is Amazon, which is attempting to disrupt a number of established food-related sectors, including private label food and private label ethical lifestyle products (putting pressure on traditional CPG players), a new food takeout and delivery service (a la GrubHub), and even testing new distribution models to explore alternative delivery providers like taxis.

While Amazon appears to have a significant number of irons in the fire in terms of food-related initiatives, out of all these areas it is currently seeing most of its new competition on the grocery front, with even peripheral players like Uber deciding to expand its grocery pilot (renaming it UberEssentials). I expect the convenience economy will experience some significant consolidation over the next couple of years, however the rise in incumbents – both traditional and digital – focusing on this space will perhaps create additional exit paths for the variety of startups that will ultimately require a larger platform to survive.

Love With Food Acquires G-Free Foodie. The Fresno, CA-based gluten free subscription box company will add a new focus for Love With Food as it can now cater to gluten-free and gluten intolerant consumers. Additionally, the company will now provide cooking lessons and tips on Love With Food’s YouTube Channel and host Twitter parties to answer G-Free questions.

Merkle Acquires 500friends. The San Francisco-based startup’s cloud-based loyalty platform allows businesses to run customer loyalty programs in stores, online, and on mobile while also identifying the most valuable customers. Customers include internet retailers and brands, including Omaha Steaks. As 500friends’ largest channel partner, Merkle, a customer relationship marketing (CRM) firm, was approached as a strategic investor for the startup’s Series C round, however those talks instead led to acquisition discussions. The entire team will be joining Merkle, which will now have the leeway to focus more deeply on building out product features.

Foodpanda/hellofood Acquires TastyKhana, PedidosYa, SeMeAntoja and Superantojo from Delivery Hero. Delivery Hero Acquires hellofood businesses in Argentina, Chile, Colombia, Ecuador and Peru. The global online food delivery marketplaces foodpanda/hellofood and Delivery Hero announced a series of separate acquisition deals which enable both companies to optimize their international growth strategy. As TechCrunch points out, this indicates that although the two companies are expanding rapidly, they are maintaining friendly competition as they focus on consolidation in different markets rather than competing in the same ones. For Delivery Hero, the company asserts that Latin America holds a central role in their long-term strategy, while foodpanda/hellofood is looking to extend its leadership in India and Mexico as it continues to concentrate on its core markets in Southeast Asia, Russia, and Brazil.

DineIn.co.uk Acquires MyDeliveryCab. The acquisition of the London-based specialty delivery service expands DineIn.co.uk’s delivery driver base, as well as delivery service to include 60 new restaurants across eight new boroughs within SW London. Similar to Caviar, or Fluc, the company powers its own logistic tech and fleet of drivers.

Baedal Minjok (Woowa Brothers Corp) Raises $36m. The Seoul, South Korea-based online restaurant ordering and delivery app processed about 4 million food-delivery orders from 145,000 registered restaurants in October 2014, with about 99% of all transactions in South Korea on a mobile phone, according to the Wall Street Journal. The new funds will help the company expand internationally and develop new technology.

Qraved Raises $1.3m. The Indonesia-based restaurant booking platform offers discounts for reservations made on its online platform, and provides back-end technology for restaurant partners to manage bookings and build guest profiles online. Previous investors include 500 Startups, and the new funding will go towards accelerating expansion, with a launch in Bali next, as well as product development.

Applause Raises $765K. The Palo Alto-based food and activity tracking app combines standard tracker tools with virtual support groups that offer feedback and encouragement. According to TechCrunch, a future update will include a meal finder feature that leverages menu data from Locu (acquired by GoDaddy in 2013) to help track favorite meals and their nutritional impact from local restaurants.

Feastly Raises $1.25m. The San Francisco-based marketplace for dining experiences connects home cooks and cooking professionals to users looking for in-home meals, catered parties and cooking classes. According to TechCrunch, Feastly recently hired Leigh Goldstein as its chief operating officer, who was most recently CEO at sports startup Exiles, and was previously director of product at StubHub and director of global shipping at eBay.

Fluc Raises $2.3m. The Los Altos, CA-based delivery startup offers restaurant delivery via its curated restaurant marketplace (which includes a markup on menu items) and third-party delivery team. According to TechCrunch, the company’s key differentiator “isn’t in the restaurants it signs up or the food it delivers, necessarily, but in the routing that it’s built on the back end, which makes more efficient use of its drivers.” The new funding will be used to expand Fluc into new markets.

Marley Spoon Raises $4.8m. The Berlin-based curated recipe kit service offers meals developed by professional chefs, and is currently available in the U.K., the Netherlands and Germany. The company intends to use the funds to continue to grow internationally.

Zomato Raises $60m. The India-based restaurant search and discovery app lets users see detailed restaurant info, scan menus, follow food critics and create personal food diaries, and is available in 121 cities across 15 countries. Zomato recently acquired MenuMania in New Zealand, Lunchtime in Czech Republic and Obedovat in Slovakia and Gastronauci in Poland. The financing will be used to “go after some key strategic acquisitions which will help strengthen market share across various countries,” according to TechCrunch.

Alfred Raises $2m. The New York-based convenience economy startup provides errands and household services such as grocery shopping, laundry, home cleaning, and more. The service – which is not related to the local recommendation service named Alfred, which was acquired by, then shut down by, Google – is currently available in Boston and Manhattan on an invite-only basis. Capital from its funding will be used for hiring, expansion to new cities and the on-boarding of people on its wait list.

Revel Systems Raises (up to) $100m. The San Francisco-based iPad-based point-of-sale system for grocery, retail and restaurant establishments includes front-end order entry, cash register and payment processing, plus a full suite of back-end products. Revel will use the funds to support partnerships (including the recently announced partnership with Intuit), as well as grow operations, expand overseas, and according to Bloomberg, will be targeting an eventual initial public offering. Dan Primack at Fortune reported that part of the raise was used to cash out venture firm DCM, as CEO Lisa Falzone stated they “just had different points of view of where to take the business.” The round includes an upfront $65 million investment from WCAS, plus $10 million from unnamed strategic investors and another $25 million equity line from WCAS. Also according to Fortune, Revel opted for the additional equity line, rather than the full $25 million as part of the initial raise, in order to maintain dilution flexibility.

Yes, I Deliver Raises $13.1m. The Shanghai-based food delivery app provides food delivery services via its mobile apps and online platforms. It claims to have over 200,000 users, and more than 5,000 cooperating restaurants.

Door to Door Organics Raises $25.5m. Lafayette, CO-based provider of home and office delivery of organic foods currently operates in 30 cities in 11 regional markets, and has more than 200 local farming partners. The company will use the funding to continue to grow and accelerate its expansion into additional markets.

Cortilia Raises $1.9m. The Milan, Italy-based online agricultural marketplace that provides a subscription service for customers to receive fresh local produce. According to Silicon Republic, the company has annual revenues of more than €2m, and is planning to further develop its web platform to seize opportunities linked to food e-commerce and mobile commerce. The funding will be used to expand its market presence in Italy, invest in R&D, hire new talent and extend its product range.

Maple raises $4m. The New York-based delivery service of chef-inspired meals aims to sell meals for less than $15, including taxes and delivery fees, and hopes to be able to get meals to customers in fewer than 15 minutes. With chef David Chang as the chief culinary officer of the venture (as well as an investor), the food and recipes will be proprietary to Maple. The company plans to launch in 2015.

Thanx Raises $4.7m. The San Francisco-based loyalty solution provider for restaurants and retailers provides software that enables merchants to identify, engage and retain their best customers. Through its platform, customers automatically receive personalized rewards via real-time notifications to their mobile devices, eliminating hassles brought on by loyalty cards or check-ins. Along with the fundraise, the company also announced direct relationships with MasterCard and Visa. The company intends to use the new capital to expand its suite of automated retention marketing tools, and grow its engineering and sales teams.

CheckoutSmart Raises $2.4m. The London-based grocery coupon app delivers cashback offers for groceries that can then be redeemed once the user purchases the product, and takes a photo of the receipt (similar to Ibotta and Snap). Currently the CheckoutSmart apps are available only for UK consumers. The investor roster is noteworthy, given their experience in the retail/rewards space.

ChowNow partners with Yelp for online ordering. The online ordering and marketing platform ChowNow now integrates with the Yelp Transaction Platform to allow restaurants to take orders directly from their Yelp business page.

Meals to Heal, The Pancreatic Cancer Action Network, and Celgene partner to address nutritional needs faced by pancreatic cancer patients and caregivers. As part of the partnership, Celgene is launching the educational program called “Cooking. Comfort. Care. Nourishment for the Pancreatic Cancer Fight” to provide tips, recipes with variety and flavor provided by Meals to Heal, and resources for people with pancreatic cancer and their caregivers.

HomeAway integrates with Uber, Instacart and Gogobot. HomeAway’s new integrations are intended to to simplify the vacation rental experience by making it easy to find transportation, stock up on groceries, plan local activities and choose restaurants based on recommendations.

Mowingo and Star Micronics partner on mobile solution for legacy POS systems. The partnership creates a mobile analytics solution for merchants and restaurateurs held back by outdated point-of-sale systems.

Google Maps app adds OpenTable restaurant reservations. In addition to providing turn-by-turn directions, business reviews, and photos, the new Maps lets users book a table for dinner without leaving the app. Previously the app offered a link to Open Table, but the new version saves users the step of clicking through to OpenTable’s mobile web site.