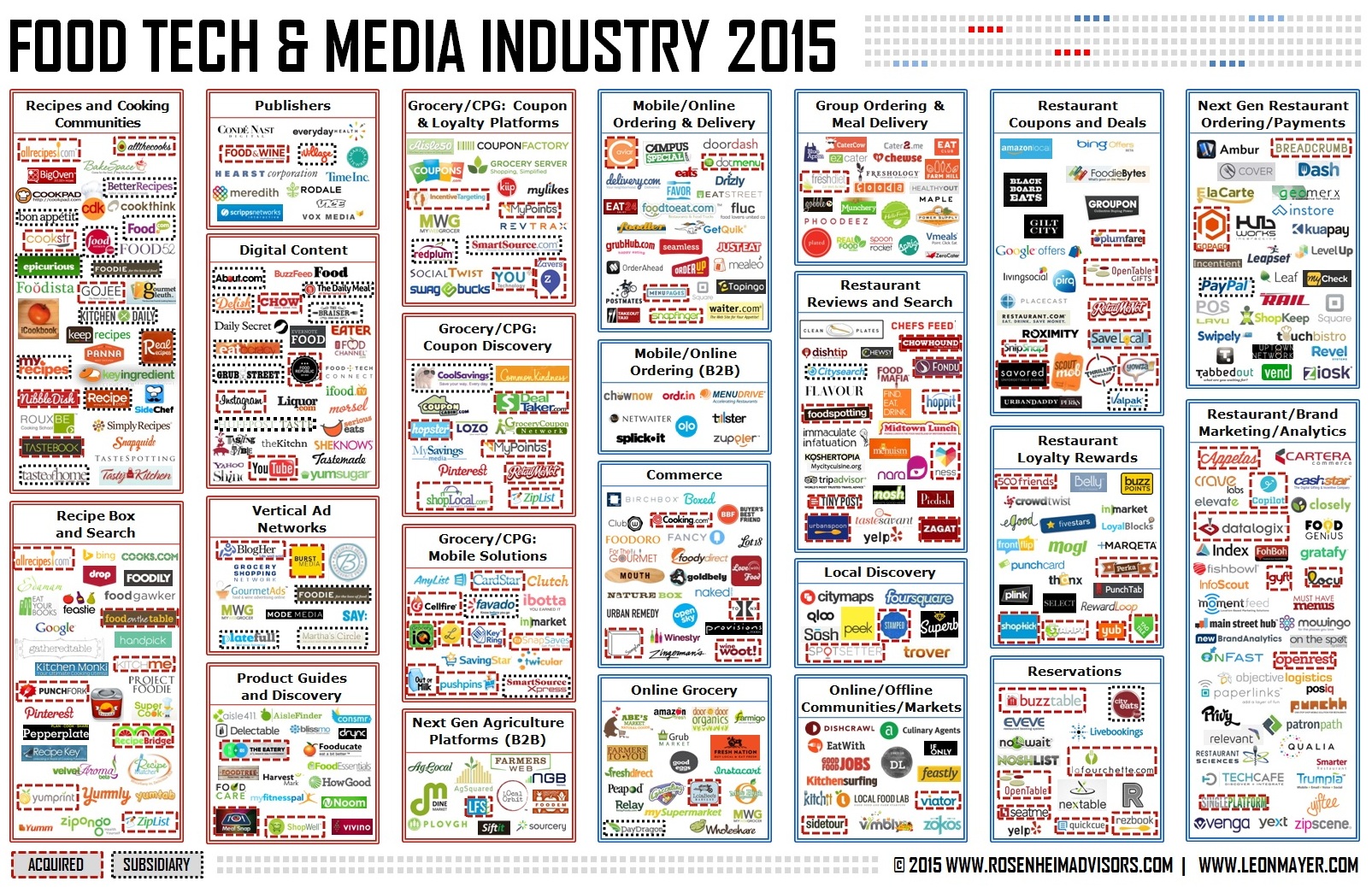 The new year kicked off with over $525 million pouring into the food tech and media sector through four acquisitions and twelve capital raises primarily in the restaurant and delivery sectors. Over half of the deals involved companies outside of the U.S., including Zomato’s notable entry into the U.S. through the Urbanspoon acquisition, and the sizable $350 million fundraise for Shanghai-based food delivery service Ele.me.

Not surprisingly, Instacart’s monster valuation, which I reported on in the December report but was confirmed by the company in January, has gotten everyone weighing in on the home delivery sector, and what’s next for the grocery industry. It’s clear that as the digital/mobile pathways towards online discovery, ordering and delivery mature, consumer adoption and behavior will continue to blossom. A recent study looked at consumer behavior in terms of the grocery experience, and found that more than half of consumers now use their mobile device in the course of their grocery shopping, an increase of 16% from a year ago.

Similarly, IBIS World released new data regarding online grocery sales, which are currently estimated to be $10.9 billion, are expected to sustain a growth rate of 9.6% between 2014 and 2018. The Washington Post, which reported on the IBIS World estimates, is careful to caution however that the high distribution costs associated with getting perishable items to customers will diminish margins. Despite this, I think there is still a lot of room to creatively address distribution challenges, including the introduction of more “click and collect” type models for suburban areas, as well as the utilization of existing delivery networks (some examples from January).

Slyce Acquires SnipSnap. The Philadelphia-based mobile couponing app, which provides crowd-sourced coupons for most major retailers and restaurants (but not grocery store coupons) will allow Slyce, known for its image-recognition and visual-search technology for products, to combine the SnipSnap technology with its previously acquired Pounce technology into an all-in-one mobile shopping solution incorporating 3D visual search, instant couponing and one-click customer checkout. TechCrunch further reports that “M&A is a major part of his company’s strategy, and it’s expecting to do even bigger and more frequent deals in the future.”

Zomato Acquires Mekanist. The Istanbul, Turkey-based restaurant discovery and food ordering app will increase Zomato’s restaurant coverage to more than 50,000 restaurants, from about 27,500 restaurants in Istanbul and Ankara. According to TechCrunch, Mekanist’s content and traffic will now be switched over to Zomato, where restaurants can also now use Zomato’s hyperlocal advertising target customers.

Zomato Acquires Urbanspoon. The acquisition of Seattle, WA-based Urbanspoon marks Zomato’s entry into the U.S., Canada, Australia and the U.K., resulting in its total presence in 22 countries, covering more than one million restaurants. Of note, according to GeekWire the acquisition was part of a process that began in September, with multiple bidders for the IAC-owned property including Yelp, The Food Network and Groupon. IAC had hired Keela Robinson to help the company boost mobile traffic, improve the product and become profitable, which also according to GeekWire, was achieved, however despite the turnaround, Zomato plans to phase out the Urbanspoon brand and app out over the next few months, as it integrates Urbanspoon’s listings on to its platform.

TripAdvisor Acquires iens.nl. The Amsterdam, Netherlands-based online restaurant review and booking sites allows users to book tables through its reservations platform SeatMe (unrelated to the U.S. startup SeatMe, which was acquired by Yelp in 2013), which will also be acquired by Tripadvisor. According to NLTimes, iens and SeatMe are “expecting a combined turnover of six to seven million euros this year,” and the companies will continue to operate in Amsterdam. Of note, iens and SeatMe were once separate companies, and merged in 2012.

Handpick Raises $3m. The San Francisco-based food discovery app and website uses semantic technology to allow users to search Instagram, hundreds of unique food blogs, and top recipe sites for dish inspiration and recipes. The company’s editorial team also selects the best dishes daily, and by following different topics, users are notified when new dishes are added to each topic. The company will use the funds to continue to build out its technologies in food image recognition, food data analysis and ingredient recommendations.

Deliveroo Raises $25m. The London-based restaurant delivery service focuses on marketing, selling and delivering meals from premium restaurants that do not usually offer takeout. The company currently serves 120 neighborhoods in the U.K. and will use the capital for expansion across the U.K. and internationally.

Ele.me Raises $350m. The Shanghai-based food delivery service is an online platform that offers customer-to-customer meal ordering services, and also works as a communication platform between users and restaurants. As TechCrunch points out, the investors are notable because Tencent owns a 15% stake in e-commerce company JD.com, and owns a 20% stake in restaurant review site Dianping.com, thus “investing in Ele.me, which operates throughout China, can potentially help all three businesses build their online-to-offline strategies.” Ele.me said it would continue to operate independently after the fundraising round.

Dojo Raises £800K. The London, UK-based startup develops an app allowing people find places to eat, drink and visit. According to TechCrunch, the company differentiates itself by offering a highly curated and visual guide on to how to spend days and nights out in London, specifically targeting 18-35 year olds who want to move slightly away from the beaten track. The company plans to use the funding to launch Dojo V2 and Android launch in early 2015, followed by geographic expansion by the end of 2015.

Farm Hill Raises $1m. The Redwood City, CA-based healthy meal delivery startup is focused on customers in suburban areas, and uses only whole ingredients in the fresh meals. The company will use the funding to hire new people and expand operations.

Boxed Raises $25m. The New York-based mobile commerce app enables consumers to purchase household, grocery, and health & beauty products, among other things, at discounted warehouse club prices. The company intends to use the funds to build out its fulfillment capacity, continue to improve the service, selection, infrastructure and distribution operations.

TapCibo Raises Undisclosed Angel Round. The Bangalore, India-based on-demand food delivery service, offers meal delivery from its own chefs, working off the concept of food courts to deliver meals in under 30 minutes. According to VCCircle, going forward, the startup is planning to partner with small-time food outlets and kitchen services. The startup will use the capital for team expansion as well as for technology enhancement.

Kitchen Stories Raises $1.8m. The Berlin, Germany-based iOS cookbook app offers recipes with step-by-step images, texts, and 5 minute demonstration videos. Rather than user-generated content, TechCrunch notes that Kitchen Stories currently has an emphasis on professionally produced content, and in particular, high quality photos and high quality video. The company intends to use the funds to expand the team, boost internationalization and the product, build up its community which will allow users to connect with each other and share their own recipes, and launch an Android app.

Line0 Raises $30m. The Nanjing, China-based food delivery startup “runs delivery services mostly for cheap franchise restaurants, guaranteeing a bowl of noodles or a Burger King Whopper to your door in less than one hour”. It currently operates in five cities: Nanjing, Shanghai, Shenzhen, Suzhou, and Wuhan, and with this latest investment, it plans to expand to as many as 20 cities in 2015.

Noom Raises $15m. The New York-based mobile app developer creates health and wellness apps that provide intelligent nutrition and exercise coaching. According to the SEC filing, Noom will take its money and put it toward “research and development, general corporate and working capital purposes, some of which may include salaries and/or other compensation paid to executive officers in the ordinary course of business.” The company declined to comment on the fundraise, and may be raising up to a total of $20 million.

Fifth Corner Raises $550k. The Helsinki, Finland-based provider of YOU-app, wellness app that connects people through micro-actions. By combining social media features and wellbeing, it gives daily micro-actions that users complete by taking a picture and sharing it with their friends and followers. According to FinSMEs, the company recently entered a partnership with Jamie Oliver, ”with the joint goal of inspiring and encouraging everyone to live happier, healthier lives – one achievable micro-action at a time“.

Yummly Partners with Instacart To Deliver Recipe Ingredients In An Hour.

Nest Partners with LG, Whirlpool and More to Make your Home Smarter/.

Zomato Partners with Uber to Take You to Dinner in Style.

Starbucks Partners with Match.com to Create ‘Meet At Starbucks’ – its First Branded-Product Feature To Facilitate Invites For Coffee.