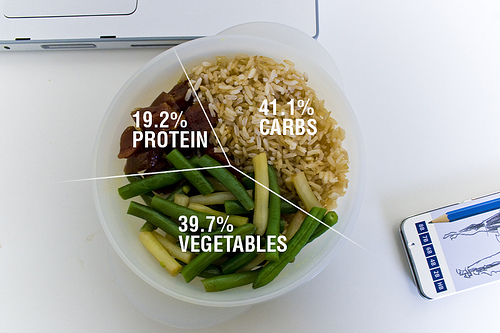 Every year, Food+Tech Connect looks at the trends that are transforming the future of how food is produced, sold and consumed. We always pay particular attention to Phil Lempert’s, CEO of The Lempert Report and author of SupermarketGuru.com, foresights. This year, Lempert’s predictions touch on many of the topics we’ve covered over the past year like food waste, transparency, health and wellness and protein consumption. Lempert also points to the terrible drought of 2012 as a direct cause of increasing food prices and predicts that consumers will use technology to reduce waste and make smarter purchasing decisions.

Below is a summary and analysis of a few of his ideas for the coming year. Quotes below come from Lempert’s summary on Supermarket News. Read his trend predictions in full here and here.

“The National Resource Defense Council estimates 40% of food goes uneaten each month in the United States. Not surprisingly, the Eco Pulse Survey from the Shelton Group reports 39% of Americans feel the most ‘green guilt’ for wasting food, almost double the number who feel guilty about not recycling.”

Earlier this year, we reported on how food is lost at each step in the supply chain, illustrating facts about the costs of food waste through data-packed infographics. We’re seeing large food companies and entrepreneurs developing technological solutions to improve efficiency and minimize waste, as described by  NRDC in this report. 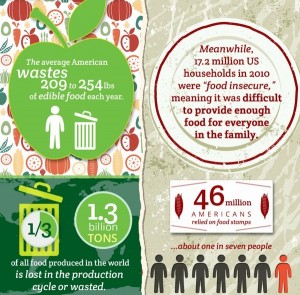 Two innovative waste reduction projects we followed this year were Halfsies, a social initiative giving restaurant diners the ability to eat a half portion of their meal and donate part of the plate’s cost to a charity, and Sian’s Plan, a new meal planning tool. Given rising food prices, coupled with the significant cost saving potential outline in the NRDC report for manufacturers, restaurants and consumers, we expect there will be even greater attention on food waste reduction technologies in 2013.

“Studies by the NPD Group show that nutrition and healthy eating habits are top meal-planning priorities for Baby Boomers…Boomers will focus on their intake of antioxidants as they continue their search for the fountain of youth. Boomers will control more than half the dollars spent on grocery foods by 2015, look for more heart-healthy antioxidant-rich foods including oily fish such as salmon, as well as green tea, sweet potatoes, dark leafy greens, popcorn, berries and whole grains to take over supermarket shelves.”

We couldn’t agree more with this prediction. A staggering two-thirds of adults and one-third of children in the United States are overweight or obese. Earlier this year, the Institute of Medicine reported that obesity-related illness treatments cost an estimated $190.2 billion annually  and cost businesses $4.3 billion in losses as a result of obesity-related absenteeism. Food Marketing Institute and Prevention Magazine’s annual “Shopping For Health” annual survey also indicates that consumers are increasingly looking for healthier food options.

A number of startups launched new products to meet this growing demand for healthier food choices. Some of the companies we reported on this year include:

Trend #4 – The Economy: The New Proteins

“The U.S. Department of Agriculture estimates the cost of both beef and chicken will increase by at least 5% due to the 2012 drought and declining supply. A major shift is anticipated in the nation’s protein food s

upply away from meat-based proteins and shifting to meatless proteins like eggs, nut butters, tofu, beans, legumes, with an increase in awareness and consumption of vegetarian and vegan meals.”

With tech investors like Vinod Khosla and Biz Stone betting on fake meat, we agree that the dialogue about consuming new proteins will flourish in 2013. But during our online conversation “Hacking Meat,” we found it’s not all about substitutes. Recipe development startup Foodpairing is seeing a growing interest among chefs to develop dishes that incorporate more vegetables and smaller servings of better meat, without compromising flavor and satisfaction.

Similarly, Cookstr’s Kara Rota sees technology as critical to reducing meat consumption, but not “ in the form of in vitro meat.” She advocates for using technology to provide home cooks recipes that emphasize quality over quantity. And Haven Bourque of HavenBMedia invites “meat lovers to sit at the table with committed vegans and dream up farm-fresh, seasonal meals that anyone would enthusiastically eat.”

There is also growing demand for sustainably and humanely raised meat, but farmers and chefs face significant barriers to making these kinds of operations economically sustainable. Following the success of Hack//Meat, you can be sure to expect more conversation and events to help help support the development of technologies that can address some of these challenges.

Trend #8 – Mobile the Next Generation: Tests for Allergens, Ripening Produce, Organics, and Start Cooking Your Meals

“The newest wave of technology includes smartphones that network with kitchen appliances and allow consumers to do everything from checking how much milk they have left in the refrigerator, to turning the oven on from another room. The next generation of mobile apps may determine if fruits and vegetables are ripe, if refrigerated and frozen foods have been kept at the correct temperature farm to freezer, and even test for foodborne bacteria.”

We also believe mobile and sensor technologies will reshape the way consumers interact with and purchase food. We are particularly excited about some of the innovative technologies retailers, technologists and researchers are developing that bridge the digital and physical worlds. Three of the more interesting projects we covered include:

Read about more of the R&D projects we covered this year here.

Trend #10 – Transparency: Who is making our food?

“2013 will be a transitional year as on-package claims proliferate and confuse. Look as supermarkets take on the role of gatekeeper and actually demand proof and transparency of claims before they will permit products to be sold on their shelves. Consumers are reading labels selecting their foods more holistically based on all the ‘food factors’ including taste, ingredients, source and nutritional composition, as well as who is making their food.”

In 2012, consumer distrust of food grew as reports of “pink slime,” antibiotic overuse in animals and arsenic in rice made their way across the Internet. California’s Proposition 37 fueled a growing debate about food labeling, and even though the proposition was not passed, the debate will likely continue into 2013.

A number of startups and NGOs developed mobile apps to help meet growing consumer demand for information about what's in their food. For example,  Fooducate launched a GMO app to help consumers determine which foods are made with GMO ingredients; Real Time Farms launched the FixAntibiotics Food Finder to help consumers find meat raised without antibiotics; and Center for Science in the Public Interest  launched Chemical Cuisine to help people understand additives in our food. Additionally, NRDC launched the Label Lookup iPhone app.

But without public databases available with data about GMO use, for example, companies like Fooducate are only able to offer a level of probability that a product contains GMO ingredients. This is not ideal for the consumer, and it's certainly not ideal for manufacturers. But there are glimmers of hope. This year, Kraft and Nestle opened up their recipe and ingredient data. And while these are just small first steps, we hope it’s an increasing trend that will give rise to new applications that improve transparency and the customer experience.

What are your trend predictions for 2013? Let us know in the comments section below, and we will feature your ideas in our weekly newsletter read by the top food and technology investors, executives and startups.

We will also inviting the individuals with the best responses to contribute a guest post on the topic of their choice to Food+Tech Connect.