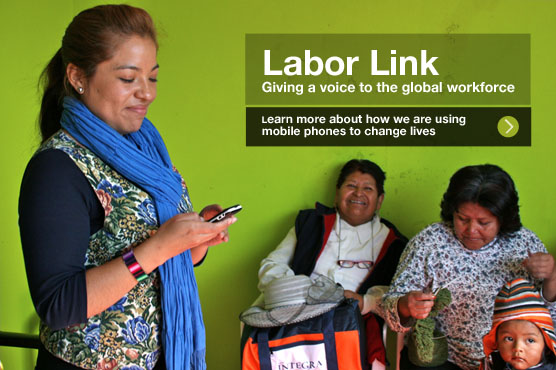 Increasingly consumers want to know where their food comes from and who grew it.  But tracking parts of the system like wage rates and working conditions is difficult when businesses are audited only once a year and companies often self report their own data.

But a new partnership between Good World Solutions (formerly World of Good and best known for the Fair Wage Guide) and Fair Trade USA hopes to increase transparency and promote economic empowerment via the most used technological device in the world: the mobile phone.

With an estimated 80 percent of the world’s population having access to mobile phones, Fair Trade USA and Good World Solutions believe it is the tool of choice to communicate directly with farm laborers and factory workers.

“There have been a lot of attempts in the past to include workers in the assessment of the supply chain, but we were not able to connect with them easily,” said Heather Franzese, Director of Good World Solutions.  “But now, mobile penetration has skyrocketed, and people have access to phones in really hard to reach areas.  So phones present a new possibility of communicating with workers directly.”

Labor Link hopes to take advantage of this new technology.  While the program is most effective when a majority of the workforce owns phones, employees do not need to have their own.  Each caller is given a unique id with which to call in so phones can be shared.  All calls are free.

The caller is then guided through an extensive survey about working conditions and wages, translated into the local language so that literacy is not a requirement for completion.  The information is then aggregated, and all calls become anonymous.  Survey data is made available for Fair Trade partners, and often farm or factory managers who want to better understand working conditions.  The public can access the data if brands chose to use the information in their own marketing, but the certification process does not allow Fair Trade to release specific information about factories or farms to the public.

The phones are also used to provide workers with valuable information, like worker rights or how to access services.

Good World Solutions piloted their Labor Link program in Peru last year and is also in use in India.  It will be used in at least four other countries next year.

About the Author
Beth Hoffman has reported on food and agriculture for ten years, airing on NPR, The World, Latino USA, Living on Earth, KUER and KALW , and studied the food system in depth as a fellow and co-lecturer in the Africa Reporting Project at UC Berkeley’s School of Journalism. Hoffman competed a year long documentary project cooking with immigrant women in their homes, has traveled to India, Uganda and Ethiopia to report on rice production and chicken farming, and did a multipart series for KUER on the artistic, cultural and environmental connections we have to food. In addition to spending many hours on-farm in Utah, California and abroad, Hoffman also married into an Iowa farm family and is currently working with her husband to slowly convert the land into a sustainable orchard and hog farm. She currently lives in Albany, California. Hoffman’s previous work can be found on her website at bethaudio.com.
Previous Next
Fair Trade USA, Fair Wage Guide, Good World Solutions, interactive voice response (IVR), Labor Link, Peru, world of good