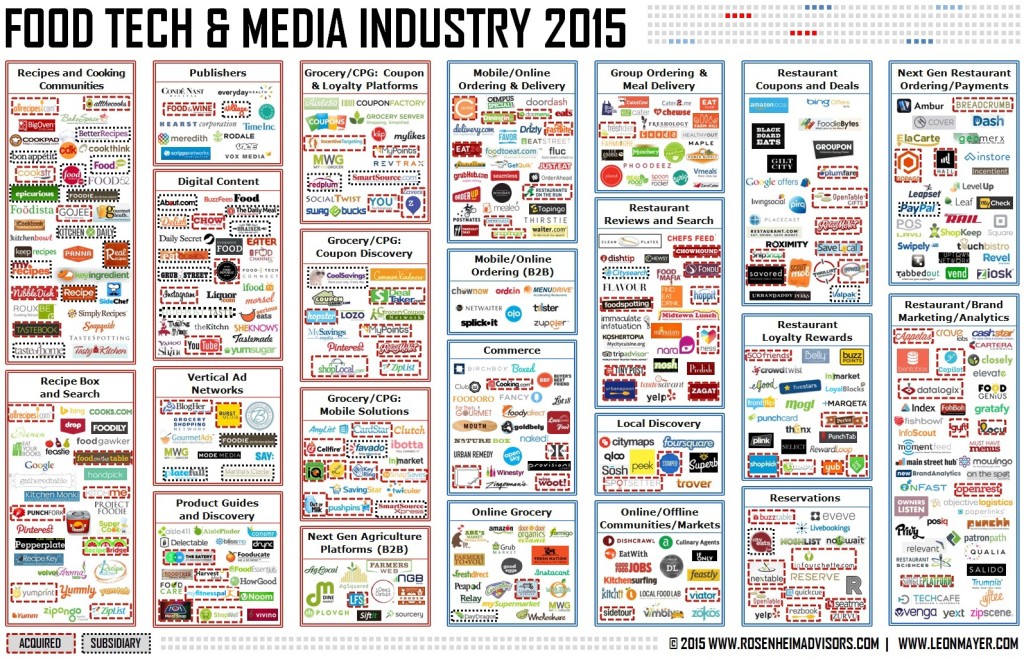 With a handful of significant late stage transactions and good mix of earlier-stage deals, March activity rounded out to almost $2.0 billion in investments through fundraising and acquisitions. With four acquisitions ($505.5 million), seventeen private capital raises ($1.47 billion) and one public company private placement ($1.2 million), delivery was still a prominent theme as were a variety of technology platforms for ordering, payment, reservations, reviews and more. About half of the fundraising took place outside of the U.S.

Mirroring the investment trends, much discussion in the media continues to focus on the “1099 Economy” and the overall delivery business model. While delivery foodtech startups like Instacart, Postmates and Caviar are being sued over labor practices, investment is still pouring into the sector as companies race to grow transactions and own each market as they expand their geographic footprint. Although current market conditions are a indeed frothy, there is still room for new specialized market segments to blossom (alcohol delivery is a recent example), where businesses need to layer in new strategies in order to tap into the new generation of smartphone-wielding shoppers.

ShopKeep Acquires Payment Revolution. The Northbrook, IL-based credit card processing startup will enable ShopKeep, a NYC-based mobile payments startup, to offer payment processing as a part of its point-of-sale platform. As a part of the deal, ShopKeep will operate under the new name, ShopKeep Payments. TechCrunch reports that the two companies were already partnering together, and the deal will allow the ShopKeep to provide a simpler product to better meet the need of merchants.

Minibar Delivery Acquires Booze Carriage. The New York City-based Booze Carriage, similar to Minibar Delivery, is an alcohol delivery platform that connects users to their local liquor stores to provide delivery. According to the release, Booze Carriage’s user base of 25,000 is expected to increase Minibar’s sales by 20%, and expand Minibar’s beer selection as well as its distribution capabilities. TechCrunch notes that the acquisition of Booze Carriage marks Minibar’s expansion to become the biggest player in the NYC place.

Recruit Acquires Quandoo. The Berlin, Germany-based restaurant reservation platform is used by restaurants in Europe, Africa, and Asia to provide restaurant operators with a table and reservation management system, aimed at raising operational productivity and service quality. Recruit, a publically-traded Japanese human resources firm, reports that the acquisition of Quandoo will enable Recruit to expand its service and global reach as part of its goal to become the world’s largest “global matching platform.” Notably, Quandoo took a strategic investment from Recruit — via its RGIP venture capital fund — in late 2014, and now with this acquisition is wholly-owned by the company’s venture group.

PayPal Acquires Paydiant. The Wellesley, MA-based payment service enables large retail chains to create their own branded mobile wallet apps and currently serves 162 million users. Given Paydiant’s popularity among retailers and banks, its acquisition positions PayPal for growth in areas outside of internet payments. As TechCrunch points out, “adding Paydiant will bring more point-of-sale volume on to PayPal’s platform.” The deal gives Paydiant the opportunity to scale its business, and PayPal a path to becoming a stronger business partner for merchants, including restaurants, by providing a payment method in app-based platforms.

MyCheck Raises $5m. The Tel Aviv, Israel and New York-based mobile payment app for restaurants and merchants allows customers to check in, view, split and pay their bills using mobile devices. The company’s technology platform is built into a number of apps and integrates with 27 different Points-of-Sale systems, allowing MyCheck to reach over 80 million consumers. TechCrunch notes that since its launch, MyCheck has pivoted to a B2B model, with analytics to allow customers to redeem special offers and be rewarded for loyalty. The company will use the new funding to accelerate its international expansion focusing on the US and Western Europe, boost sales and marketing, and augment its business intelligence capabilities. Notably, the investment comes from Santander’s new Innoventures Fund, which adds strategic “expertise and scale,” and the potential to have portfolio company’s marketed to the bank’s 107 million-plus retail and commercial customers across Europe and the Americas.

ChowNow Raises $10m. The Venice, California-based online ordering and marketing platform enables restaurants to take orders through their website, Facebook page, and via branded smartphone apps specific for each restaurant. The company has recently expanded its management team as well as its services to integrate with Apple Pay, Yelp, and Google, and plans to introduce a new catering product and other enhancements to its core product. The funding will be used towards growth acceleration and product launch.

DoorDash Raises $40m. The Palo Alto-based on-demand restaurant food delivery platform makes it possible for small businesses to provide local delivery services to their customers. DoorDash currently services eight markets across the country. The company claims its on-demand delivery infrastructure enables customers to receive delivered goods in less than 45 minutes and ensures reliable deliveries in times of irregular demand. The company will use the proceeds towards expansion into new markets across the country and further investment in logistics technology to scale its platform beyond food.

Teabox Raises $6m. The Darjeeling, India-based online tea-seller distributes tea from the origin directly to a global consumer base. The company is vertically integrated and works directly with tea plantations in India and Nepal. According to TechCrunch, by handling distribution, supply, storage, and logistics itself, Teabox eliminates supply chain inefficiencies and is thus able to sell products at higher profit margins and ensure rapid delivery. Teabox will use the funding towards expansion into newer markets, infrastructure development, talent acquisition, and marketing initiatives.

ezCater Raises $11.7m. The Boston-based online catering platform connects people with local caterers and restaurants across the U.S, with a specific focus on business catering. ezCater has partnered with over 40,000 caterers in the country to deliver meals for meetings and events of up to 2,000 people. The new funds will be used to hire employees, focusing on expanding its digital marketing, brand marketing, and software engineering teams.

Kitchenbowl Raises $1m. The Seattle-based startup describes itself as a community in which users can share and discover recipes. The company has both a mobile and web platform, and aims to distinguish itself by offering step-by-step recipes, each with an accompanying GIF to guide clarity. In addition, users can find new content by following other users. Kitchenbowl aims to eventually enable users to purchase ingredients for the recipes through its platform.

Maple Raises $22m. The New York-based startup, with notable involvement by chef David Chang, will launch and operate a delivery-only kitchen that serves restaurant quality meals to subscribers in New York in the coming months. The company is designed to be vertically integrated, distinguishing itself from other meal delivery startups by managing orders, food preparation, and delivery. Maple will use the new funding to develop its product, hire staff, and build out infrastructure and marketing.

Thirstie Raises $1.1m. The New York-based wine, spirits, and beer delivery app serves as a marketing platform for liquor stores. Through the company’s mobile platform, users can order alcohol from nearby stores that offers delivery services. TechCrunch reports that the company aims to establish a relationship with consumers through alcohol-related content, currently featured via microsites dedicated to the drinking culture of the customer’s region. Thirstie has partnered with over 100 liquor retailers and operates in markets including Austin, Los Angeles, Miami, and New York City, and plans to use the funding to expand into new markets, as well as speed customer acquisition, enhance product development, and increase support provision.

Pinterest Raises $367m. The San Francisco, CA-based visual discovery platform raised capital at a valuation of $11 billion, more than doubling the valuation from $5 billion last May. As Bloomberg reports, Pinterest has been working to build out its advertising model, through which brands can pay to promote their posts. The company is also investing to expand internationally and improve its product.

Oddle Raises $718k. The Singapore-based food ordering platform enables smaller restaurants to join the online ordering market by managing the logistics of online deliveries and pick-ups. A subscription service, Oddle allows customers to order food through a branded page customizable by the restaurant, while providing restaurant operators with an order management system. Unlike competing services that charge restaurants per order transaction, Oddle charges a flat fee for every restaurant outlet, which allows restaurants to make a higher profit if their online businesses are successful. Oddle intends to use the fresh injection of capital to focus on regional expansion into major cities, in addition to platform development to allow enable multiple language functions and back-end infrastructure strengthening to support larger capacities.

Retty Raises $8.2m. The Tokyo, Japan-based social platform enables users to rate and review restaurants and see which spots are popular with their friends. The site presently sees an estimated 8 million monthly visitors. Retty plans to use the funding for international expansion to the United States, Singapore, and Hong Kong.

Favor Raises $13m. The Austin-based on-demand food delivery app allows users to have products delivered from local grocery stores and restaurants. Through Favor’s mobile app, users can identify their desired food or grocery item along with the store they might want to purchase from. Favor’s delivery people can stay in touch with customers through text message as they seek out the products for delivery. The company currently serves Austin, Boston, Houston, and Dallas, and plans to use to the funding to improve customer services and expand into seven to ten new cities this year.

Dianping Raises $850m. The Shanghai, China- based restaurant review and group buying app, The investment will push the company’s valuation to $4.05 billion, which is above its closest U.S. equivalent – Yelp. Dianping has more than 190 million monthly active users and over 60 million reviews of restaurants and other local businesses.

Groupon India Raises $20m. The U.S.-based business has been exploring strategic options for its holdings in Asia, and Groupon India, which was born out of one of Groupon’s acquisition of SoSasta, has picked up outside investment. According to TechCrunch, the long-term strategy for Groupon India appears to be aimed at further separating itself from its parent company in the U.S. and growing more autonomous.

Innovative Food Holdings Raises $1.2m. The publicly-traded nationwide provider of specialty foods to the professional foodservice market, and the parent company of The Fresh Diet, a direct-to-consumer freshly prepared meal delivery company, announced it has closed a private placement of restricted shares. According to the release, the company plans to use the proceeds for the growth of The Fresh Diet and expansion opportunities in the Direct-to-Chef business segments.

PepperTap Raises $1.2m. The Gurgaon, India-based mobile application offers on-demand grocery delivery services. Rather than maintaining its own inventory, PepperTap focuses on facilitating orders and deliveries, and claims to ensure delivery within Gurgaon in less than two hours after customers place their order. The funding will be used to further develop the product, scale up the operations, grow its staff, and enhance offline and online brand visibility.

Uber Partners with Chili’s to provide diners who use the Ziosk pay-at-the-table tablet a $20 credit for transportation.

Postmates Partners with Starbucks to deliver Starbucks products to customers who order through the Starbucks mobile app.

Sidecar Partners with Eat24 to offer delivery services using Sidecar’s network of drivers, who are currently engaged in the ride sharing service.

Find value in this monthly roundup? Help us continue bringing you the news, insights and community you depend on by making a small contribution. Learn more HERE.