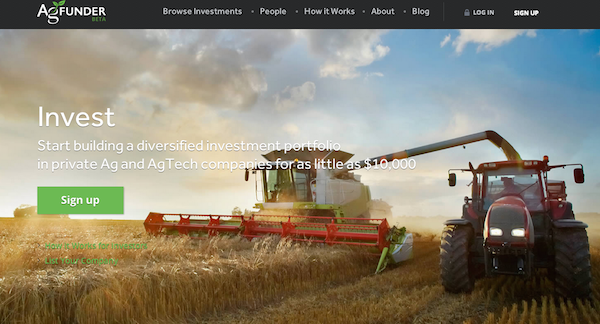 While there is a lot of discourse about how we’re going to feed 9 billion people by 2050, there are few who are actually putting their money where their mouth is to finance the innovations that will ensure global food security.

“We can talk about solving different problems with water or desertification, or that we need to increase yield or productivity, and [then] there’s all these other problems, but if we don’t solve the capital issue, then there’s a real big problem,” says AgFunder co-founder and CEO Rob Leclerc.

To put this in perspective: over the last decade we needed to invest about $209 billion in agriculture annually to increase food production, according to a report by the Food and Agriculture Organization. However, only about $142 billion was invested annually, a shortfall of $670 billion dollars.

New York City-based AgFunder has a solution: The equity-based crowdfunding platform, which launched in September, is bringing transparency and accelerated deal flow to the agriculture industry by making it easy to syndicate agricultural investment opportunities. Through its platform, agriculture, ag tech and food processing startups with a lead investor can raise capital from accredited investors.

While working as an associate and then as a partner at SeedRock Capital Group, a venture capital firm focused on natural resources and agriculture, Leclerc had trouble raising additional capital for one of the fund’s investments in a West African agriculture project. He spent most of his time educating investors about opportunities in agriculture. “It made me say, there’s gotta be a better way to do this,” he explains.

That experience became his inspiration for AgFunder. For now, Leclerc is focused on building and educating the company’s investor community, and is starting by creating funds for smaller opportunities that range between $500,000 to $1.5 million. In the future, however, he hopes to bring on much larger deals.

The platform is currently running two campaigns – one for AgFunder, and one for Oakland, California-based TerViva, which develops new crops for under productive agriculture land and sustainable biofuels.

Modeled after FundersClub, AgFunder sources its own investments and then creates a dedicated investment fund for each company, into which it can then syndicate investors. Before companies can be listed on the platform, AgFunder does due diligence to ensure that they are fundable, good investments. While companies can be located anywhere in the world, the “sexy” startups – like aerial drones, automatic drones and robotics – or those with a social mission are the kinds of companies Leclerc thinks are most likely to get funded. They also look for reputable teams with demonstrated past success.

For deals it sources, AgFunder takes a 20 percent carried interest, or a share of the profits once the principal is returned to the investors, which Leclerc tells me is an industry standard for private equity and venture firms. For syndication deals, it will probably split the carriers 50/50. AgFunder doesn’t take a management fee, but it does have a small fee to fund administrative costs like legal and accounting.

The opportunity has huge potential. Globally, agriculture production and services is a $2.56 trillion market, and when combined with food and beverage it’s a $6.4 trillion market, according to research from HighQuest Partners LLC. Leclerc says that they’ve identified 2 percent of very high net-worth United States residents that have invested in large agricultural projects. There is also growing interest from green tech and technology investors who are interested in diversifying their portfolios. For now, AgFunder’s success will really depend upon finding great projects and educating investors.

It’s still early days for AgFunder, but the world will certainly be a better place if this works.

Having trouble with business planning for your food or ag startup? We’re launching a series of business classes to help you fast-track your success in 2014. Learn more here.