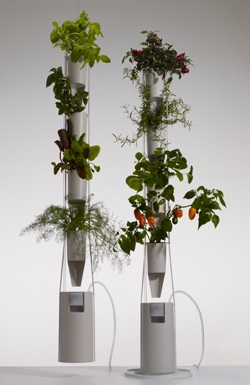 [Update: Windowfarms raised  $257,307 in total through their Kickstarter campaign.]

As of 12:20 a.m. this morning, Windowfarms, the open source hydroponic farming system and social network, has raised over $223,822 dollars on Kickstarter. This is $173,822 more than their goal, making Windowfarms Kickstarter’s most successful food project to date and one of their more successful projects period. In the past day alone, the project brought in $24,000.

Exactly one month ago (today is your last day to support the project and get a discounted system), the company launched a Kickstarter campaign to fund the production costs of their newly designed One-Column Windowfarms. Until now, Windowfarms have been made out of water bottles, constructed using the open source toolkits that are available on their site. I know from experience the process is fun, but takes a long time .

To make growing your own food easier and more accessible, founder Britta Riley invited top industrial designers and engineers to design beautiful and easy to use systems made from environmentally friendly materials. The company set out to raise enough money to meet the startup costs of manufacturing this new project. According to Riley, if built in Vietnam, Thailand, or Korea, production would cost $50,000. In the United States production would cost $200,000, two to four times as much as Asia.

The Windowfarms Project’s success is a clear indication that increasingly more people care about buying and growing their food locally.

But, do they care about local manufacturing?

“Buy local should not apply only to food. We would help a lot of our current environmental and economic issues if we started looking for MADE IN THE USA label again, too. Like it or not, we shop a lot, us Americans. There are plenty of US manufacturers who are hungry for green product business,” wrote Riley. “For a lot of businesses, US manufacturing makes sense. It can be less expensive over time and much less of a headache. However, startup manufacturing costs are higher here and few small businesses can pull together the money early on to start off right with US manufacturing.”

Thanks to crowdfunding, Riley and the Windowfarms team have been able to raise their production investment through the “preorder” model. As Riley puts it, “It’s like a CSA, but for products.”

Watch the video and prepared to be inspired.