How Flow Hive Crowdfunded $6.4M for Its Honey-On-Tap Beehive 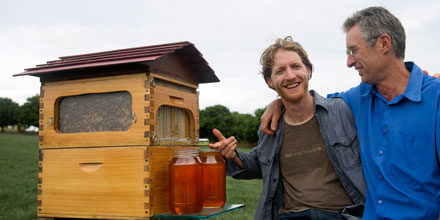 Who would have imagined that a new beehive product would be the largest grossing Indigogo project of all time? In late February, Flow Hive’s Indiegogo campaign surpassed its $70,000 goal within 8 minutes of launching, raising $2.18 million in the first day alone. A week later, it broke the record for the most funded Indiegogo campaign to date. With 20 days left to go, Flow Hive has raised $6.4 million from close to 14,500 backers.

Extracting honey from hives is arduous and time-consuming for beekeepers and stressful for bees. Australian father-son beekeepers Stuart and Cedar Anderson set out the revolutionize beekeeping  and honey harvesting with Flow Hive, as well as to make it easier for anyone to keep bees. Their system allows beekeepers to harvest honey straight from the hive, without opening it. By turning a lever, the honeycomb cells inside the hive split vertically, and unfiltered honey pours out the tap. The bees are left relatively undisturbed and it drastically reduces harvesting labor.

Despite the overwhelming show of support, Flow Hive has also been met with skepticism. Some beekeeping and apiary experts say that it oversimplifies the beekeeping process and may not be a long-term, sustainable solution to harvesting honey. Others, like homesteader Eliza De La Portilla, have expressed concern over the design and cost.

We caught up with Stuart and Cedar by e-mail to learn more about how they raised so much money so quickly through their Indigogo crowdfunding campaign, how they cultivated the Flow Hive community and how they plan to keep up with the tremendous demand. Our interview has been edited for clarity.

Learn the recipe for crowdfunding success with our Crowdfunding Bootcamp (in-person & online), taught by Lisa Q. Fetterman, who raised $1.3M on Kickstarter for Nomiku. Get 25% off with code “BEES” here.

Food+Tech Connect: Can you tell us a bit about the inspiration for and evolution of Flow Hive?

Cedar Anderson: I’m a third generation beekeeper. I started keeping my own bees when I was 6. I’ve also always been a tinkerer, always asked if there’s a better way to do things. I’d been trying for years to find a better way to extract the honey than having to suit up, calm the bees, drag everything to a shed and use a centrifuge to extract the honey. It’s a long and messy process that really stresses the bees out. I’ve been looking at better ways to do this for about 10 years. One day I just woke up with the realization that the key was changing the shape of the cells. I was working on a system where the frames were split horizontally. Then a few years ago dad (Stuart) had a couple of strong coffees and came up with the idea of splitting the frames vertically. That’s really the day Flow Hive was born.

FTC: Flow Hive is making headlines for its record-breaking Indiegogo campaign. What are some of the factors that have made your campaign so successful?

Stuart Anderson: Aside from Flow Hive being an ingenious idea, there are a couple of factors at play here. First, for people already keeping bees, it’s immediately obvious what a huge leap forward this is in terms of honey extraction. Second, there’s a lot of people who have been interested in keeping bees but have been discouraged by the difficulty and mess, as well as the requisite space and equipment of the traditional extraction process. All of a sudden, beekeeping is now much more accessible. Third, I think there’s a growing yearning among people to be more connected with their food and the natural world. I think the Flow Hive has offered a simple and practical way for people to do that and has sparked people’s imagination. It’s really gratifying to see how much love there is out there for bees.

CA/SA: Our social media campaign started on January 25, less than a month before the campaign started. At that point, the goal was to get the support of our personal networks and hopefully a few beekeepers along the way. Cedar had been making some videos for years with a view to launch a crowdsourcing campaign. But really Flow Hive went viral because of genuine interest in bees and and the concept. Certainly there was no slick strategy or marketing push. Really, it was friends and family coming together to get it all happening. We’re so grateful for our talented friends and family who have been able to help us bring Flow Hive to the world.

FTC: With thousands of orders placed and more coming in every day, how do you plan to scale manufacturing and meet the incredible demand for Flow Hive?

CA/SA: Production is a long and involved process, with much to do before your first product rolls off the conveyor belt. There had been plenty of work with the manufacturer for some time before the campaign kicked off. So all that really had to change was the scale and the speed with which it needed to occur. That has been the focus, and [we are very] confident that the Indiegogo orders will be fulfilled in the time frames indicated.

FTC: As a record-smashing food crowdfunding campaign, what advice do you have for aspiring food projects?

SA: Be genuine, be passionate and care about the product more than dollars.

Learn the recipe for crowdfunding success with our Crowdfunding Bootcamp (in-person & online), taught by Lisa Q. Fetterman, who raised $1.3M on Kickstarter for Nomiku. Get 25% off with code “BEES” here.