Join us at Fail Friday (on a Thursday) December 6th! 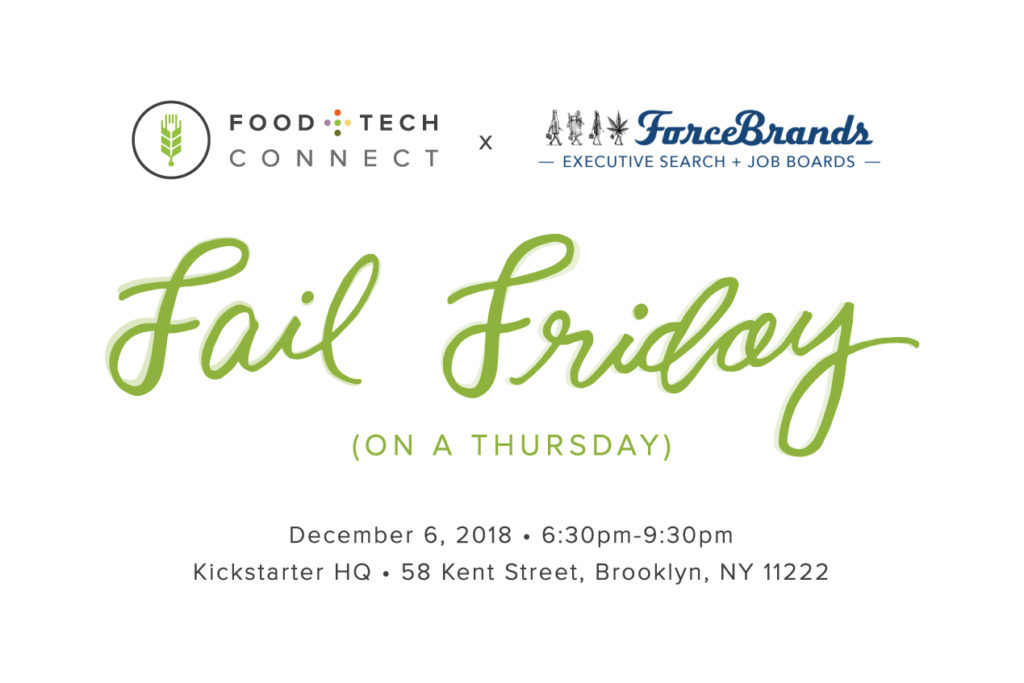 It’s not easy being a food innovator. There’s no road map for reinventing an industry.

That’s why we’ve teamed up with ForceBrands to celebrate failure in all its glory at Fail Friday (on a Thursday). Join us to hear stories of failure and lessons learned from top food entrepreneurs.

SPEAKERS:
Erin Patinkin, Co-Founder, Ovenly; Executive Producer & Co-Host, Start to Sale
Erin Patinkin is the co-founder of the award-winning bakery Ovenly and executive producer & co-host of Start to Sale on Vox. She has been recognized as one of the most “badass women” in food by Zagat and Thrillist and as “one to watch” by Conde Nast, among other accolades. Erin speaks about her work at national events, and her writing has been featured in Lucky Peach, Vice, Cherry Bombe, and in her cookbook, Ovenly: Sweet & Salty Treats from New York’s Most Creative Bakery. She has appeared in on Good Morning America, The Chew, Unique Sweets, and in Eater, Bon Appetit, Inc, Food & Wine, The New York Times.

Ben Conniff, President, Luke’s Lobster
Ben Conniff is co-founder of Luke’s Lobster, a Maine-bred lobster shack with over 30 locations across 9 US cities and internationally in Japan and Taiwan. Luke’s controls their catch all the way from the docks to the plate, meticulously preparing and handling every claw, knuckle, and tail to make the world’s best-tasting lobster roll. Ben is also the author of Real Maine Food, and has written for Saveur, GQ, Tasting Table, and more. He was named to the Inc. and Zagat “30 Under 30” lists and serves as an advisor to restaurant, fishery, and agriculture businesses. He splits his time between Brooklyn, NY, and Portland, ME.

Chitra Agrawal, Founder, Brooklyn Delhi
Starting in Brooklyn, Chitra has been cooking, teaching and writing about food inspired by her family’s recipes from India for ten years. She co-founded Brooklyn Delhi with her husband Ben Garthus in 2014 to bring the flavors she was creating to a wider audience. Chitra is the author of Vibrant India: Fresh Vegetarian Recipes from Bangalore to Brooklyn (Penguin, 2017). Prior to Brooklyn Delhi, Chitra held marketing roles at American Express and DDB and completed her MBA at NYU Stern. Brooklyn Delhi’s award-winning condiments can be found in Whole Foods nationwide and in Blue Apron meal kits and have been featured by food critics at the NY Times, Saveur, Food & Wine and more.

Dr. Nicola Nice, Founder & CEO, Pomp & Whimsy
Dr. Nicola Nice is a sociology PHD, researcher and brand consultant. She launched Pomp & Whimsy to take back the role of women as cocktail innovators overlooked by history. For Victorian women, who were the chief home distillers and recipe makers at the time, the infusion of additional fruits or botanicals into gin made for a richer sipping spirit. With Pomp & Whimsy, we set out to breathe new life into this long forgotten tradition, while simultaneously updating it for a modern palate. Bringing fancy, modernity, and dare we say it, even a touch of femininity, to this stuffy, old world spirit.

ForceBrands is the leading specialized recruiting firm for the consumer products industry — we build the teams that build the brands. Our industry-specific divisions BevForce, FoodForce, BeautyForce, and HerbForce offer executive search services, board of director assembly, and a digital job board to connect directly to qualified candidates.

We are ‘people for a hire purpose’ and strive to transform the way consumer product professionals of all levels identify employment opportunities and employers are connected to world-class talent. Go HIRE with ForceBrands.

The Brooklyn Brewery is made up of a rich collection of characters from all over the world. In our Williamsburg home, these characters are dedicated to brewing and selling great beer and enriching the communities we serve. Together, these Brooklyners have assembled the skills needed to transform a home brewing hobby into an independent brewery with a brand that has become an international beacon for good beer.