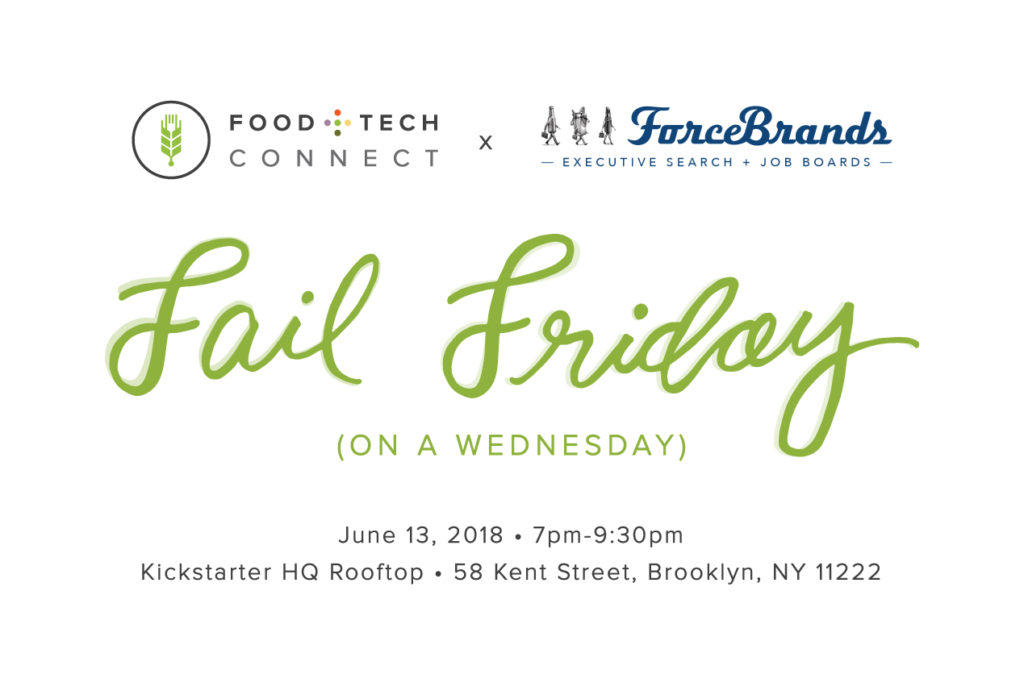 It’s not easy being a food innovator. There’s no road map for reinventing an industry.

That’s why we’ve teamed up with ForceBrands: FoodForce | BevForce to celebrate failure in all its glory at Fail Friday (on a Wednesday). Join us to hear stories of failure and lessons learned from top food entrepreneurs.

We will also have food from emerging brands Seek Food, Lavva, HavenRow, PetPlate and drinks from Metabrew. And, as always, there will be lots of networking.

Camilla Marcus, Founder, west~bourne
west~bourne, is a healthy-minded café and takeaway shop in SoHo founded by Camilla  Marcus, an artist and cook at heart with a background in business development, law, and investing. Camilla has helped bring to life some of New York’s beloved neighborhood restaurants, including dell’anima, Riverpark, and the reopened Union Square Café.  Formerly the Director of Business Development for Union Square Hospitality Group, Camilla has also worked in real estate investing for Colony Capital and CIM Group. With west~bourne, she is now both the investor and the entrepreneur, committed to rethinking what it means to be a good neighbor through the lens of hospitality. a portion of every purchase made at west~bourne will benefit a neighboring non-profit, The Door, to fund hospitality job training for youth in our community, and we are hiring from that very program to build our team.

Renaldo Webb, Founder & CEO, PetPlate
Renaldo Webb is Founder and Chief Product Officer at PetPlate. Inspired by his dog Winston, Renaldo founded PetPlate after deciding that he did not want to feed his dog anything less than real food. After making hundreds of batches of home-cooked dog food for Winston and his pup pals, Renaldo decided to launch a pet food brand that he could proudly call his own. Prior to PetPlate, Renaldo worked at LCatterton and McKinsey & Company as a lean manufacturing consultant, where he led operational turnarounds for public and private companies. He launched PetPlate as a nationwide subscription service in early 2017, following an appearance on the hit TV show Shark Tank.

Ravi Jolly, Co-Founder & President, I Heart Keenwah
Ravi Jolly, founded I Heart Keenwah, a brand that makes delicious, nutritious, plant-based food products using top quality quinoa. In doing so, he has made a mark on the world by making organic and Fair Trade quinoa accessible, introducing many to a health-supporting protein source and sourcing quinoa in a way that is equitable to farmers.

Force Brands is a boutique recruiting and staffing agency that specializes in hiring strategies and organizational design for food and beverage companies. Force Brands includes two divisions, the newly introduced FoodForce, which focuses on hiring for the food industry and BevForce, which focuses on hiring for the beverage industry. FoodForce | BevForce is a comprehensive hiring and job search platform providing staffing resources, including: executive recruiting, interim placement, board of director assembly and targeted industry job boards.

The Brooklyn Brewery is made up of a rich collection of characters from all over the world. In our Williamsburg home, these characters are dedicated to brewing and selling great beer and enriching the communities we serve. Together, these Brooklyners have assembled the skills needed to transform a home brewing hobby into an independent brewery with a brand that has become an international beacon for good beer.