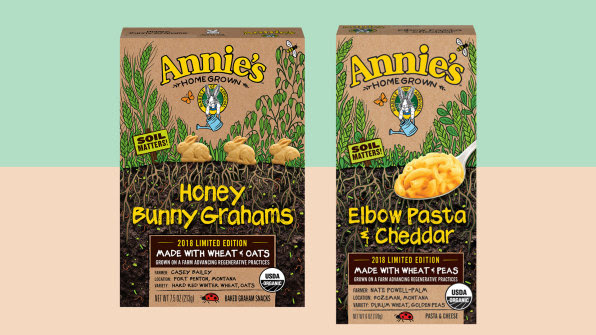 The new Regenerative Organic Certification (ROC) officially launched at the Natural Products Expo West trade show last week as part of a movement to bring sustainable agriculture beyond  organic, or, as some believe, bringing it back to its original meaning. The efforts have gone so far as getting CPG giant General Mills on board–the company announced plans to create South Dakota’s largest organic farm to supply the wheat for Annie’s Macaroni & Cheese line.

The Amazon Effect has analysts feeling concerned about the retail sector. Walmart has expanded its grocery delivery service to more than 100 metro areas. Aldi and Kroger have both expanded partnerships with Instacart. Amid increased competition and distribution problems, Blue Apron is hoping to give its struggling business a boost by selling meal kits in stores.

General Mills will work with Gunsmoke Farms to convert 34k acres to organic by 2020, where it will grow organic wheat for Annie’s Macaroni & Cheese line. The company also wants to cut GHG emissions 28% by 2025.

2. What Does the New Regenerative Organic Certification Mean for the Future of Good Food? – Civil Eats

The Regenerative Organic Alliance will oversee ROC certification, which aims to move beyond USDA organic. One of its primary goals is to require growers to focus on soil health and carbon sequestration.

The move comes as retailers like Walmart, Kroger and Amazon offer their own kits in fast-growing segment. It hopes to have its kits in store by the end of this year.

Annie’s wants to highlight the fact that farmer Powell-Palm is using regenerative farming practices to grow the wheat used in its macaroni and cheese. Read more about the product here.

Casa Verde Capital makes seed and Series A bets on ancillary businesses in the cannabis industry. Its biggest investment to date is Leaflink, a marketplace for retailers and brands.

7. Walmart Will Offer Grocery Delivery in More Than 100 Metro Areas Amid Pressure from Amazon, Target and Instacart – Recode

The move would make it available to more than 40% of the US population. The company plans to add more delivery partners beyond Uber and Deliv as it expands its service.

Boxed will pursue a new funding round to remain private, after also having preliminary talks with Amazon, Target and Costco.

News of both expanded partnerships comes as Kroger’s fallen earnings last week raised concerns over the Amaozon Effect on the retailer and grocery segment at large.

The deal is part of Clorox’s strategy to accelerate growth through acquisitions of brands with a focus on health and wellness.

The wholesaler-retailer has reached agreements with Harris Teeter, Kroger and Food Lion to sell 21 of its 38 stores. It is in discussions over the sale of its remaining stores.

The round was led by True Ventures and Silicon-valley angels, with participation from the founders of Skype and WordPress, Blue Bottle CEO and the Norrsken Foundation. The company will initially focus on financial products and marketplace capabilities.

The round was led by Finistere Ventures And Radicle Growth Acceleration Fund along with Rabobank Food and Agri Innovation Fund and existing investors. New capital will be used to commercialize its ultraviolet light-based seed treatments.

Also participating in the round were Rhapsody Venture Partners, Serra Ventures, Valley Oak Investments and Climate Impact Capital. The company is working to move toward a lower-touch selling process and expand into the EU market.

The USDA has withdrawn the Organic Livestock and Poultry Practices, regulations that were years in the making. The rules would have clarified what access to the outdoors means for livestock.

Tensions between Whole Foods and some of its top brands will come to a head on March 19. A key issue discussed will be Whole Foods’ efforts to centralize its merchandising.

Chang is teaming up with Ugly Delicious collaborator Christopher Chen, former Wired editor Scott Dadich and former editorial staff of Lucky Peach to launch Majordomo Media. The company will incorporate an editorial platform as well as podcast and video projects.