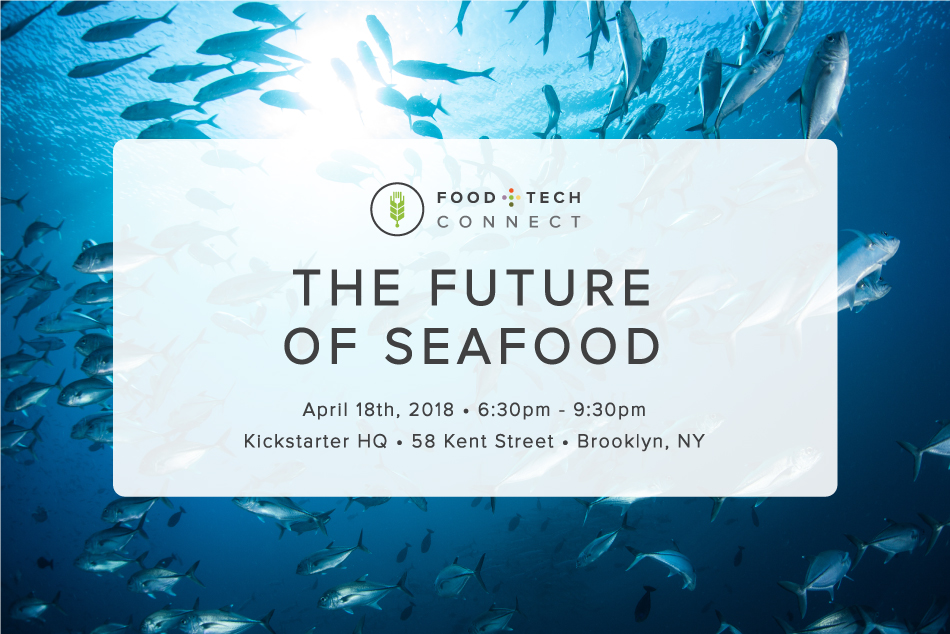 Ocean life is at risk of collapse, yet the demand for seafood is increasing. More than 90% of seafood in the US is being imported from overseas, and 30% is sourced through illegal, unreported and unregulated fishing operations. Now, companies are cropping up to build a more sustainable, traceable and profitable seafood supply chain. From live tracking technology to converting pollution into fish feed, join us to hear from innovators in the space at our April Food+Tech Meetup. Presenters will do a deep dive into their business strategies, technologies, challenges and lessons learned in the aquaculture and seafood space.

PRESENTERS:
Trevor Swope, Director of Operations, Dock to Dish
Dock to Dish is a seafood cooperative that supplies fish directly from Montauk to restaurants in New York City and Long Island. In 2017, Trevor developed and implemented the first hybrid geospatial database system to feature live vessel and vehicle tracking integration at Dock to Dish. The system makes near-real time “end to end” monitoring of wild seafood supply chains available to the public.

David Tze, CEO, NovoNutrients
NovoNutrients’s disruptive technology platform profitably transforms carbon dioxide from industrial emissions into high margin products for voluminous aquaculture, nutrient, and other markets. In doing so, the company also addresses two global environmental challenges: climate change and depletion of fisheries. The total addressable market for NovoNutrients exceeds half a trillion dollars, including $100B in aquaculture feed, $350B in feed for agriculture and pets, as well as the growing, meat-free food ingredient space.

Sean Dimin, Co-Founder, Sea to Table
Sean Dimin is Founder & CEO of Sea to Table. Driven to fix the broken seafood supply chain, he founded the company in 2009 with his father Michael. As the preeminent better-for-you and better-for-the-planet seafood brand, Sea to Table delivers exclusively high quality traceable, wild-caught, and sustainable American seafood to restaurants, institutions, and home cooks across the United States.

Donna Lanzetta, Founder & CEO, Manna Fish Farms
Donna Lanzetta is an attorney and entrepreneur with a passion for sustainable seafood production. Motivated by a concern for our world’s growing population, our fixed/declining wild fish stocks, and the urgent need to feed our burgeoning numbers, Manna Fish Farms is awaiting permits to operate an open ocean fish farm, eight miles off the Eastern Coast of the United States.

Kickstarter is a funding platform for creative projects. We are an independent, founder-controlled company of 132 people working together in an old pencil factory in New York City. Over 10 million people, from every continent on earth, have backed a Kickstarter project from films, games, and music to art, design, and technology. To date, tens of thousands of creative projects — big and small — have come to life with the support of the Kickstarter community.

Like our namesake borough, the Brooklyn Brewery is made up of a rich collection of characters from all over the world. In our Williamsburg home, these characters are dedicated to brewing and selling great beer and enriching the communities we serve. Together, these Brooklyners have assembled the skills needed to transform a home brewing hobby into an independent brewery with a brand that has become an international beacon for good beer.