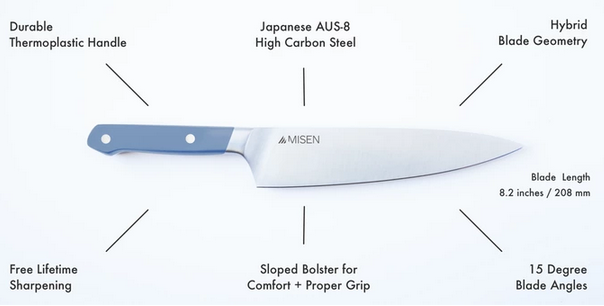 A good chef’s knife is a home cook’s best friend. But they don’t come cheap. A high-quality knife can run anywhere from $120 all the way into the thousands. Misen is turning that paradigm on its head.

The startup launched a Kickstarter campaign earlier this week to fund the initial production run of its inexpensive top-tier chef’s knife. It blew through its $25,000 goal in a matter of minutes and has raised $356,000+ with 26 days left in the campaign.

Like Warby Parker or Casper for kitchenware, Misen works directly with materials suppliers and manufacturers to offer a high-quality knife direct-to-consumer for $65. The team spent 18 months prototyping, testing, learning and improving. They created hundreds of sketches and dozens of prototypes, landing on a final product that combines elements of both Japanese and German knife design, which Serious Eats’ J. Kenji Lopez-Alt calls “the holy grail of inexpensive chef’s knives.”

Co-founder Omar Rada attended our Crowdfunding Bootcamp, taught by Nomiku CEO Lisa Q. Fetterman in March 2015. We caught up with him by email to learn more about the evolution of Misen, what factors have contributed to the campaign’s success, his advice for other food projects and much more. Our interview has been edited for brevity and clarity. 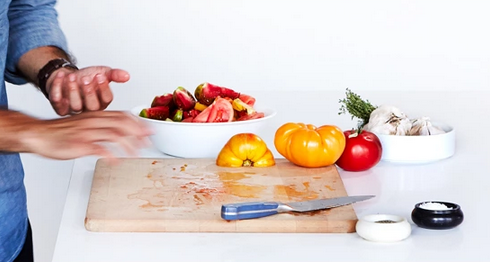 Food+Tech Connect: Can you tell us a bit about the inspiration for and the evolution of Misen?

Omar Rada: About 5 years ago, a friend lost my All-Clad pan. When I went to replace it, I had a bit of sticker shock at the price of a new pan (I had received my old one as a gift). My previous cookware had been pretty crappy, so a quality tool was a revelation. I wasn’t about to downgrade to poor quality, but couldn’t justify the price of the All-Clad. The fact that I couldn’t find a decent pan for a reasonable price stuck with me.

A few years later, I had the same experience while searching for a new chef’s knife. There didn’t seem to be any high quality options at an affordable price. This really bothered me, because I knew how much a quality kitchen tool could improve the cooking experience. At some point, it came together, and I knew selling quality kitchen tools directly to customers online was the answer.

For the next six months, I went down a rabbit hole of knives: blade geometry, alloys, weights and balance points, everything. I eventually partnered up with a designer out of Chicago, Peter Mueller, and after another four to six months of intense work, we had a knife prototype we were proud of. We then traveled across the world in search of a knife maker with the craftsmanship and professionalism necessary to delivery the quality and consistency we were after.

Along the way, I was introduced to Josh Moses by Exo co-founder Gabi Lewis, who I met at Food+Tech Connect’s Crowdfunding Bootcamp. Much like my experience with pans years ago, Josh’s friend had lost his chef’s knife, and he was on the lookout for a new one. Josh was the exact person this company was designed for an avid home cook who appreciates good tools and good value. Josh and I hit it off right away, and a month or two after our first meeting he joined the small team that is now Misen.

FTC: Your knife costs less than half of a traditional top notch chef’s knife. Can you tell us more about the supply chain efficiencies you’ve created to offer a high quality knife at an affordable price point?

OR: We owe a debt to the companies that came before us for this one. Companies like Warby Parker that popularized the idea of a direct-sourced, direct-to-consumer approach. Now we almost take it for granted, but when they started their business the approach was still fairly new and novel (online, at least).

For us, it just made sense to apply this model to the kitchenware industry, which has many legacy players operating on an outdated margin structure. There is no reason why quality kitchen tools need to cost as much as they do. By partnering directly with materials suppliers and manufacturers, and selling direct to consumers online, we are able to offer people a chef’s knife made with better quality steel at less than half the price of mainstream “premium” chef’s knives.

FTC: You’ve raised $356,000+, smashing your $25,000 campaign goal in the first few hours of your campaign. What factors do you think have contributed to your campaign’s incredible success so far?

OR: I’d say three factors really have played into our success so far: 1) an *enormous* amount of preparation and hard work 2) luck and 3) not just a product, but an idea that resonates with people.

OR: SO MUCH. One of the key takeaways from the FTC Crowdfunding Bootcamp was that pre-launch community building is vital. There are so many amazing projects on Kickstarter that suffer from a lack of exposure, and we really wanted to make sure this didn’t happen to us (or at least try to prevent this from happening).

With Josh taking the lead for outreach pre-launch, it was important to us to connect with the food blogger community in particular. We wanted to engage with people that clearly love food and get their feedback on our project. This was invaluable for us, and we are honored to have met so many amazing people in the food community throughout this process

FTC: You took our Crowdfunding Bootcamp last March. Do you think your learnings from the course contributed to your campaign success. If so, how?

OR: Yes, 100 percent. What resonated with me the most was the emphasis the FTC Bootcamp placed on pre-launch community-building and outreach. Because of this, we probably over-indexed in terms of the amount of work we dedicated towards pre-launch outreach, but it is clear that a lot of that work is serving our campaign very well.

FTC: What advice do you have for aspiring food projects?

OR: Crowdfunding is a lot more work than you expect. Do not start a project if you are not completely passionate about it. If you aren’t, it will be easy to lose interest if things get hard, which they will.

On a more practical level, aside from some things that should be pretty standard (compelling narrative, relevant creative assets, etc.), the single most important thing I’d recommend is to start building and engaging a community of like-minded people as early as possible.

Want to launch a wildly successful campaign like Misen’s? Learn the recipe for crowdfunding success with our Food Crowdfunding Bootcamp.