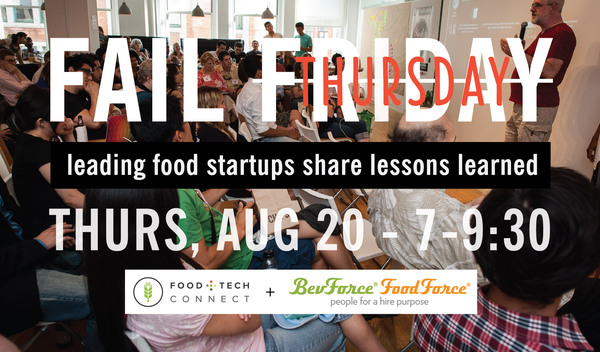 It’s not easy being a food innovator. There’s no road map for reinventing an industry. So, in partnership with Force Brands, we cooked up the Fail Friday series to celebrate failure in all its glory.

Join the food startup community for our fourth Fail Friday (on a Thursday) on Thursday, August 20. Hear from WTRMLN WTR, Super Sprowtz, The 86 Company the former co-founder of Quinciple and more. Startups will share their stories of failure and lessons learned from growing their businesses, followed by audience Q&A.

There will be snacks from food360, Legally Addictive Foods and Pure Genius Provisions, cocktails from The 86 Company and lots of networking.

RSVP: Space is limited, so snag your spot here. 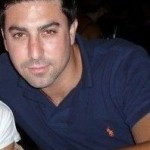 Jeff Rubenstein – CMO, WTRMLN WTR – the pioneer in cold pressed, juiced watermelon and one of the fastest growing companies in beverage.  Prior to WTRMLN WTR, Mr. Rubenstein served as SVP, Marketing for Vita Coco, the worldwide leader in coconut water, where he was instrumental in helping the brand evolve from a niche, natural food trend with revenues under $10M into a global phenomenon with revenues over $300M and a 2014 partial sale to Red Bull China that valued the business at $665M. He spent the early part of his career in Brand Management at The Coca-Cola Company.

Considered a leading voice in consumer marketing, Mr. Rubenstein is regularly featured as a speaker at industry and academic conferences, including those at Harvard Business School.  Mr. Rubenstein is a graduate of the Warrington College of Business at the University of Florida and currently lives in New York City with his wife Loren and daughter Olivia. 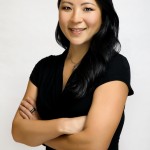 Alice Cheng – Founder & CEO, Culinary Agents – a professional networking and job matching website designed for current and aspiring professionals in the food, beverage, and hospitality industry.  Having spent years working in a restaurant and then going on to work for IBM for 13 years in cross-industry innovation, Alice brings her knowledge of technology into the food and beverage industry to solve inefficiencies and gaps around talent sourcing and career development. Alice is a deeply experienced business, marketing and sales professional who is passionate about helping people build careers and has taken, and continues to take, leadership roles in mentoring all levels of talent in the technology, business and hospitality spaces.

Kate Galassi – Product Head, Natoora – Kate started her career in food as an apprentice on an organic produce farm in New Hampshire. She has worked for several Union Square Greenmarket producers including Rick’s Picks and Cayuga Pure Organics. In 2010 she became the produce buyer for The Spotted Pig and The Breslin. In early 2013 she co-founded Quinciple, a curated farmers’ market box company. She recently left Quinciple and has joined the team at Natoora, a London-based produce company. 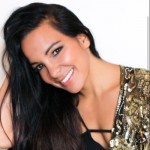 Radha is also the co-Founder of Daybreaker, an early morning dance party for urban professionals that takes place on weekday mornings and serves coffee, tea and green juice in lieu of alcohol and replaces the monotony and often lonely gym experience for a community inspired dance party. She is also the co-Founder of THINX, a women’s apparel company that provides a sustainable,patented solution for women to provide support, comfort, confidence, and peace of mind during their “time of the month” and beyond.

She was a 2013 Recipient for the Tribeca Film Festival “Disruptive Innovation Awards”, was named by MTV as “one of eight women who will change the world” and was named by Forbes Magazine as a “2013 Millenial On a Mission”. 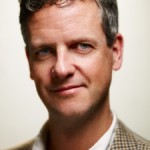 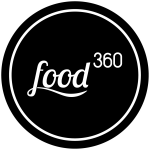 food360 aims to change people’s experience with food: whether that be sourcing local and/or seasonal ingredients from the farmers’ markets and artisanal vendors; by presenting new and exciting flavor/ingredient combinations to them; or feeding not only hungry bellies, but also culinary curiosity through demonstrations and presentations.