Why Heritage Radio Launched a Kickstarter to Rebuild Its Website 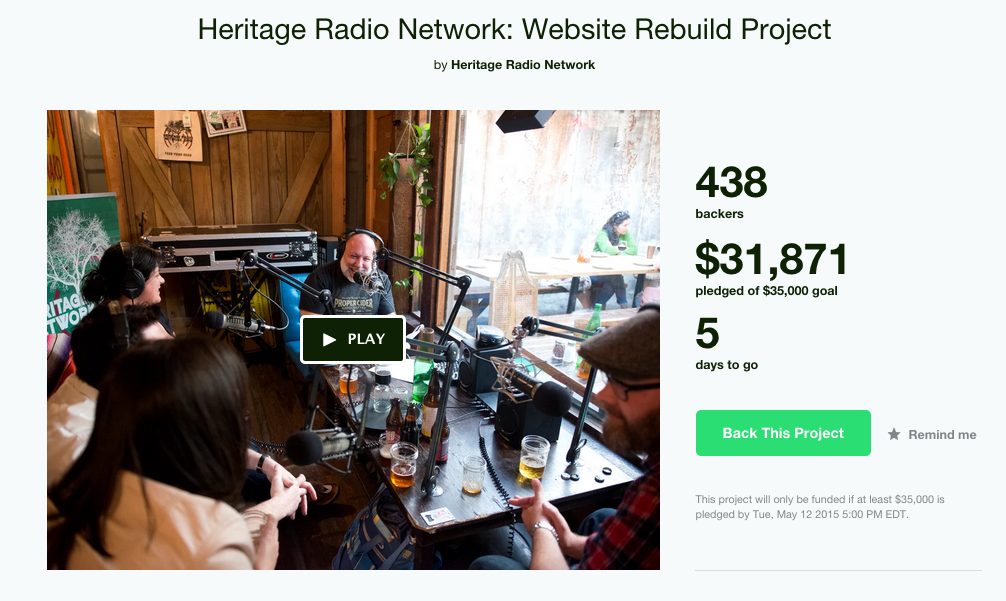 Heritage Radio Network shares the stories and voices of good food movement. The non-profit radio station broadcasts 40+ free shows a week out of a repurposed shipping container in Brooklyn, NY. Its programs cover everything from Food Waste to Tech Bites, and guests include food luminaries like Alice Waters and Michael Pollan.

Since HRN launched in 2009, it’s grown from a fringe passion project to a robust platform with 7,000+ episodes of archived content, live streams and food news. But its website is in trouble; the language it was custom coded in will stop updating at the end of the year and the site will cease to exist. So HNR is calling on the good food community to help fund a critical website rebuild. It launched a Kickstarter campaign in Early April and has seen tremendous support so far. HRN has 5 days left to reach its $35,000 goal, and only has $3,000 left to raise.

We caught up with HRN executive director Erin Fairbanks and deputy director Allison Hamlin by email to learn more about why the rebuild is so critical, what features the new site will have and their lessons learned from the crowdfunding process.

You can learn more and donate to HRN’s Kickstarter campaign here.

Food+Tech Connect: You have 1 week left in your Kickstarter campaign to fund HRN’s website rebuild. Why this rebuild is so critical to the future of HRN?

Heritage Radio Network: HeritageRadioNetwork.org runs apps through Heroku’s Bamboo Stack, which will cease receiving updates in 2015. The alternative to a rebuild would be to migrate our current site to Cedar, the updated version of Heroku. But the process would be complicated and nearly as expensive as a rebuild because our current site is custom coded and has so much archived content.

Ultimately, we decided to take this opportunity to focus on dramatically improving our user experience by reimagining our site’s functionality. In the six years since we built the framework for our existing site, much has changed about our organization and our content. What started as a passion project- a “clubhouse for subversive foodies”- has become a robust network of hosts, partners and listeners. We’re ready to give them a site that is elegant, responsive, and easy to navigate. Our new site will allow us to share and showcase the work that is so important to our mission.

FTC: Why did you decide to go with Kickstarter, rather than Indiegogo or food-focused crowdfunding platform Barnraiser?

HRN:We put it out there that we were looking to use crowdfunding to back this project and collected feeback about the various sites. A number of our friends and partners have had great success with the platform- Lisa Fetterman with Nomiku, Mark Ladner with Pasta Flyer, Hella Bitters with their Craft Your Own Bitters Kit. We had connections within our network who set us up with the Kickstarter team, who gave us some invaluable advice and guidance on shaping our project. For our campaign, the functionality and tools Kickstarter provided allowed us to customize our outreach. And we loved their robust outreach to members of the site through staff picks, “Projects we love” emails, and their “Project of the Day” designation. Kickstarter also has offices in Brooklyn, which made it really easy to work with them in person.

FTC: Why did you feel crowdfunding was the right avenue for this project rather than applying for grants, loans or other funding sources?

HRN: Heritage Radio Network a community supported 501(c)3 non-profit. For us, the crowdfunding approach is part of our identity. It is a barometer for us to gauge whether what we’re doing is important to people, and whether we’ve earned their support. Crowdfunding, more than any other funding source, engages our audience and hopefully opens a door for them to be an active member of the HRN community in other ways.

We wanted to have as much advice and resources incorporated into the final decision making process as possible. For the month or two leading up to our launch, we asked partners, hosts, leaders of companies and orgs we loved, friends, and other insightful folks to join our “launch committee.” They were integral to our vetting process, checking out our early site designs, the Kickstarter video, campaign page content and rewards, and giving us feedback about how to make them better. Once the project launched, we sent them social media to share and asked them to reach out to their networks to spread the word.

FTC: What have been your biggest lessons learned from your Kickstarter campaign so far?

1. It all comes down to the power of network, building and nurturing a strong community is vital to success. Putting time and energy into that work is the most important thing you can do as an organization. HRN has always operated on this principle, so it’s not really a “lesson”, but especially on our minds right now.

2. Asking is an art. If you have a strong network (see lesson #1), there are people who want to help.

Sometimes, yes, it’s about asking them to be a backer. But in this project, the most amazing work has been done by people who were able to introduce us to someone who could write an article about the station, or conducted amazing social media campaigns, or reached out to their organizations to ask them to participate, or offered to bartend for our celebration party. Finding the right “ask” may involve some creativity, but it’s always worth it. (NB: Amanda Palmer’s book, “The Art of Asking” was a big inspiration in this process.)

FTC: Can you tell us more about the rollout timeline and the features the new site will have?

HRN: Heritage Radio Network’s new site is the brainchild of the amazing team at Operation CMYK (seriously, they are rockstars). We’re completely reimagining how users will interact with the site, so there’s LOTS to look forward to. Here are our top three favorites:

A timeline view of the most recent shows and content. Tired of searching our site for the freshest and tastiest episodes? We are too. That’s why the landing page of our new site will have a visual scrolling timeline of the newest and best episodes. You’ll be able to peruse the past day, week or month by scrolling endlessly to the right.

A working search function. Our current site has over 200,000 tags and 7,000 episodes. Sometimes looking for that one show or news piece can feel like searching for a needle in a haystack. We’re updating the coding on the back end with a more robust search algorithm. That means if you want to track the evolution of rooftop farming in NYC from 2009 to the present, you’ll have no problem hunting down each and every episode.

A place to share non-audio host and station content. Our new site will go above and beyond to create a space for sharing resources and continuing the conversation. There will be pages for hosts to share photos, recipes or any other content related to their show (think: Serial’s interactive website). We’ll also be able to share events, partnerships, the work of people + orgs we love, and so much more on this new platform.