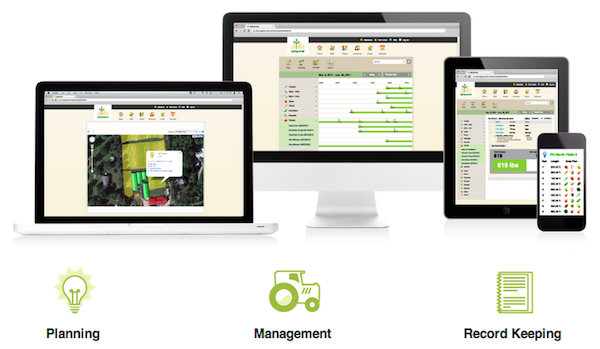 Interoperability of data and systems are virtually non-existent when it comes to agriculture. But one company hopes to change that.

AgSquared has spent the last four years working closely with small farmers – typically mixed vegetable farmers with farms that range from 1/2 an acre to 600 acres of land – to develop planning, management and record keeping software. Today, nearly 6,000 farmers in the US, Canada and 88 other countries are using its platform.

In the beginning, it was difficult to sell farmers on the idea of AgSquared because most were used to keeping records with pen and paper and didn’t really have any interest in digitizing their operations. In fact, co-founders Jeff Froikin-Gordon and Giulia M. Stellari tell me that even when farmers were using the platform, they would still request the ability to print out their schedule so they could bring it out into the field. Now, they say, things have changed dramatically. More farmers are using technology than even two years ago, and all of their farmers and the farmers they meet at conferences have smart phones. And now they are receiving requests for mobile apps that farmers can use in the field.

Now that AgSquared has established credibility with its farmers, it wants to make it easier for farmers to integrate their data with other online services, starting with Local Dirt. While there have been a wave of startups that have developed marketplaces to help farmers sell and market their goods, adoption has been slow because they become yet another place where farmers have to do data entry. As a management tool that already captures harvest data, however, AgSquared could help these startups streamline their data collection and reduce the barriers to entry for farmers.

“With this acquisition, we’re taking a first step in the direction of making the data that our users are collecting about their farms and their harvests, and especially on the production side harvest and sales, and helping them integrate that information into a lot of the online services that now exist,” says Stellari.

For the next year, AgSquared and Local Dirt will operate as separate tools, but AgSquared will focus on building a basic integration so its users can get their harvest into Local Dirt’s product inventory and get their sales data from Local Dirt into AgSquared. Over time, however, AgSquared will integrate those sales management features into one platform. It has no plans to launch a marketplace.

“It’s definitely something we were planning on building ourselves, in fact one of our grants covers the development of some of these features,” says Froikin-Gordon. “The main reason why [we decided to] acquire instead of building [a sales management tool] ourselves right now is that we could do it immediately. It might be another year before we can get those sales management features out the door if we were building them ourselves, but this way we can put those features into our users hands right now. And there is a lot of value in that. Every year makes a big difference to small farms. An unprofitable year for a beginning farmer means they’re going out of business. And so, the more we can help them better understand the drivers of profitability on their farm this year, the better we can support those farms right now.”

In 2015, AgSquared plans to release an API to allow for further integration. They are in talks with potential partners, but are not able to comment on who those companies are at the moment.

Founded in 2005 by Heather Hilleren, Local Dirt is one of the first food tech startups to create an online marketplace for local food and sales management tools for farmers, distributors and retailers. Hillern raised approximately $1 million in angel funding from O’Reilly AlphaTech Ventures and Peak Ridge Capital’s AgTech Fund, and secured a $600,000 grant from the National Science Foundation and the US Department of Agriculture (USDA). The startup also developed Locavore, a mobile application that helps consumers find local food. Hillern has joined AgSquared as an advisor.

AgSquared has secured $750,000 in grants from USDA and the National Science Foundation, as well as an undisclosed amount of angel funding.