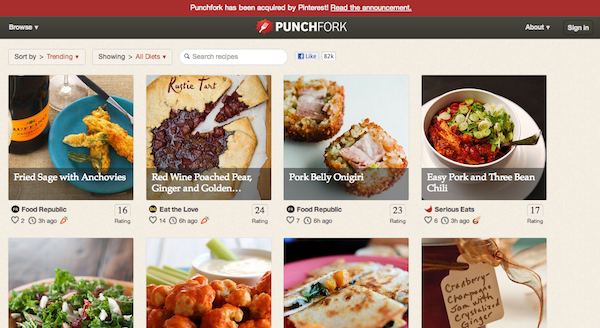 Last week, social recipe curation website Punchfork announced it had been acquired by Pinterest, and that it will soon shut down its website, API and mobile apps. CEO Jeff Miller will join Pinterest's engineering team to help improve Pinterest's discovery. Pinterest is not disclosing the acquisition price.

While most have focused on what this means for Pinterest, I'd like to focus on Punchfork and the lessons that other recipe startups can learn from Miller's experience.

Recipe startup business models are tricky. Many (most) go the advertising route, but Punchfork decided to try its hand at the API subscription model (read our in depth interview here). The startup developed an API that gives developers direct access to its recipe database. With this access, developers are able to integrate recipes into their own website or mobile app and, for example, perform a diet classification of any list of ingredients. It allows bloggers or publishers to syndicate their recipes directly into Punchfork's database and, using Punchfork's analytics tools, track their popularity. Below is a screen shot of Punchfork's offering and pricing plan.

Evernote Food is, perhaps, Punchfork's most publicized user, using the API to power its Explore Recipes feature on Evernote Food. Other users include DuckDuckGo, AnyList, Pulse, Good Genius, CookItForUS and FastFood. Miller would not comment on the number of paying API users he has, but he admits that it's not enough to make it a scalable business. While the Punchfork API might be scalable from an operational standpoint Miller “never saw evidence that there is a particularly large market of strictly recipe API users out there. Instead it seems to be a small-to-medium market,” he told me by email.

His greatest challenge with getting people to pay for access to the API is the lack of available data, like nutriti

on and preparation steps, to support the needs of potential users.

He also experimented with coupons and targeted offers without much success because of Punchfork's lack of scale. “The profits on coupons and targeted offers are naturally low, so you need huge volume, to a degree that I underestimated,” Miller explained. “Another problem was that there is no “AdWords for Ingredients” API out there that lets you match a list of ingredients with relevant ad inventory. To build one ourselves would have been another huge undertaking, although I considered it for a while before reality set in :).” Ultimately, Yummly beat Miller to the punch on that one.

In the end, however, focusing on the API business model may ultimately have paid off for Miller, pushing him to develop a robust technology that can also be used in other verticals. Adweek has some interesting predications about how Pinterest may want to integrate Punchfork's technology:

“Yet a more robust recipe offering may be small-minded when considering the larger potential Punchfork brings with it. Developers and marketers have been awaiting developer tools from Pinterest that would let them plug into the platform to do things like accurately measure Pinterest’s impact on sales and brand awareness, build apps that pull pins and pinboards as content or run ads targeted according to Pinterest data. Pinterest has kept quiet on any such plans, leading to speculation that any developer tools are way down the road if even on Pinterest’s roadmap. However, Punchfork has already built a developer tool, the Punchfork API, that lets developers pull recipes from Punchfork and display them on their sites or in their apps. That API can stream a real-time recipe feed or sift Punchfork’s content for specific categories like ingredient or publisher. It also lets bloggers or publishers stream their recipes directly into Punchfork and track how they perform; imagine that ported to Pinterest as a way for brands to auto-post products as pins and measure user response.

Pinterest may not want to open up its platform to the point that its content gets aggregated and accessed externally through apps like Flipboard, following the example set by Twitter over the summer, but it’ll likely want to find a way to help brands promote their Pinterest content on their own sites or apps and vice versa. Punchfork’s technology could help them realize that goal.”

A brief note of thanks to Miller for being so candid with me. Hopefully, his experience will prove valuable for some of you.

Are you working on a recipe startup? What innovative business models are you testing?