The Price of a Thanksgiving Turkey 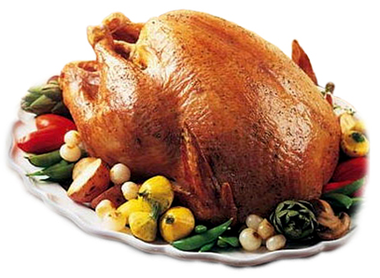 Guest post by Chris Holman, co-owner of Nami Moon Farms. The views expressed here are solely those of the author, and do not reflect the views of Food+Tech Connect.

I’m often fascinated by the prices I find at the local supermarkets. Why? Well, before I was farming, it was just a price. I knew it was cheap, but I had no idea how cheap it was when compared to the cost of production for a farm like ours. So nowadays I see the same prices, but I do a little mental math, compare it to an average and then wonder how this product could be SO cheap. Like much of large-scale agriculture, I find it to be fascinating, unbelievable and more often than I’d like…horrifying.

The other day, I was in a local grocery store and I noticed their turkeys. So, I grabbed my cell phone and took this photo:

$1.38 per pound! Wow. These turkeys were all around 11-12lbs, so that meant you could purchase one for around $16.00. That’s a great deal. How is it possible though? I started to think through everything required to raise a turkey on our farm, and here’s a summary of my thoughts. Before I get into that, I should note a couple of things. First, the costs I’m calculating below don’t include anything related to the infrastructure required for raising a turkey (i.e. a pen of some sort, shavings, waterers, an area for them to roam, etc). They also do not include any labor costs. I’m looking only at the basic costs of producing Thanksgiving turkeys. Two, I’m assuming approximate pricing here based on some knowledge I have personally, some research and the website for Purely Poultry, which is a company located in Fremont, WI. There are some small differences in pricing depending on which hatchery you work with, how they ship, etc.

Anyway, there are a few major stages to raising a turkey. In our first year, we raised 50 turkeys, so I’ll run with that number and pretend that I’m just an average person looking to raise turkeys for myself, my family and friends. Any left over will be eaten by the same people or sold to others by word-of-mouth. By raising this many, I’ll be able to benefit from some small price breaks. Raising only five, for instance, would be a little more expensive.

Stage 1: Purchase 50 turkeys and ship them to your location
Stage 2: Brooding: Keep those turkeys warm with at least one heat lamp
Stage 3: Feed those turkeys
Stage 4: Slaughter those turkeys

If I used our current brooder box, it requires one 250 watt bulb to create a 4′ x 4′ area that has a temperature of 100-105F. 105F is a little high, but the birds can moderate their own temperature by leaving the area for a bit and coming back. Anyway, all I need is that one bulb for my 50 turkeys. If I run that bulb for 24 hours a day for a couple of weeks, the cost would be somewhere around $8.00. If I divide that into each turkey, it costs $.16 per bird. Not too bad.

Feeding turkeys will be one of the most expensive stages because they are bigger birds, you raise them longer than most birds and the conventional variety grows pretty quickly–so they eat quickly too. If we assume that a conventional, broad-breasted turkey will take 4-5 months to raise, we’re looking at around 75lbs of feed or ~1/2lb of feed per day on average. A heritage turkey takes 6-7 months–or longer–so we’re looking at around 125lbs of feed for them. You can lower this a bit by putting them on pasture, but there will also be times that they’re going through a growth spurt, and they’ll eat a lot more. The cost of feed can vary a lot too, depending on how you do it, but I’ll assume $.25/lb for feed. Organic can cost a lot more, higher protein gamebird starter–you start them on this for a couple of weeks to a month–also costs more, but $.25 is our ballpark figure for this exercise.

Processing can vary too, but in general it will cost $7-$9 for a non-huge turkey.

So, here’s what I’m looking at in my head:

If we divide that into a 12lb conventional turkey, that’s $2.71/lb, and it’s $4.03/lb for a heritage turkey. This is the basic cost of production and break-even price.

Again, I haven’t included any infrastructure, transportation or labor costs in these figures. If we did this, the price per pound should go up for both a conventional and a heritage turkey.

Now, as a farmer (or anyone running a business), you have to ask yourself, “How much do we pay ourselves for–in this case–raising turkeys for 4-7 months?” They require some work every day, and some days are more work than others. Then there is the fuel we use to transport the birds, their feed, etc. Then there’s just the cost of equipment. That’s long-term equipment like fencing, feeders, waterers, range shelters and short-term or one-use equipment like wood shavings. There’s also insurance, licensing, and “the farm” in general.

Just for fun, let’s add some of those costs of production.

This is not accurate, by any means, but let’s project “the farm” out long enough that the equipment, land, buildings, etc. needed to raise them and future birds would cost $.50 per bird. Now we have $695.10.

It’s really important to take a second here and point out that a lot of farmers do not pay themselves for their labor. Instead, the net profit all goes into the farm. While I realize that the farm is ‘ours’, it is a separate legal entity and it is a business. Most businesses need to pay employees to succeed, and in the case of a farm, it’s usually the farmers who are the employees. So, if you never pay yourself anything for your labor, your numbers can look better here. Granted, it’s only the numbers that look good and you are subsidizing them with your life.

I don’t want to belabor the point here, but this also assumes that we start with 50 turkeys and end with 50 turkeys. The odds of this happening are relatively slim, and the ‘expected’ losses tend to be in the 2-4% range. So we’ll expect to lose 2 birds. Predators, the weather and random acts of death being what they are, we’ll most likely lose at least 4-5 birds. Those birds will die at different stages, so the losses will vary for each one. Having said that, we won’t spend as much on them either because they’ll be gone. Losses early on are far more, um, affordable let’s say, than losses toward the end when you have all of this time, energy and feed wrapped up in each bird. I want to make sure we include this in the thought process, but I won’t include them in the overall calculations for this exercise.

Anyway, a 10.9% profit margin for the farm isn’t great, and in that scenario I had to spend all of that money in order to make my $5.20 per turkey ($260)—and we still haven’t included *all* of the costs of production here.

In closing, if I tried to compete with that store-bought turkey and charged $1.38/lb, I would lose $36.44 per turkey or $1,822 dollars. Trying to compete with that turkey is obviously not something that a farm like ours can do and be financially sustainable (the most important definition of sustainable in my book), but given the general perception of food within our culture today, we are competing with it whether we want to or not. That is, the food we produce is often seen as expensive, it travels from afar (i.e. from here to the Fox Valley or Madison) instead of the food large-scale, industrial companies are producing being seen as cheap and traveling GLOBAL distances (i.e. thousands of miles). As you can imagine, it’s quite easy to be frustrated by that, but ultimately this is not a post about the illusion of cheap food. This post is about arming you with the basic knowledge about the production of food so that you too can look at a price like $1.38/lb and wonder how it is possible. Some of the answers are wrapped up in the economies of scale and that’s why a lot of farms get big, but there are other answers that should alarm us. That is, if we are ever given the answers to our questions, or if we ever ask them. This is also a very good example of how farm(er)s can lose a lot of money in a hurry. If you’re not charging enough, you lose. It doesn’t matter how great you are at farming or how amazing your products are. We did ok in this exercise, which approximates reality, but it’s not great…and we’re still only paying minimum wage. Not many employees want to farm for that .