As consumer technology adoption grows, restaurants are trying to figure if and how they should integrate it into their operations. From payment products that aim to boost check averages, to services that increase user engagement, it can be difficult for companies to know which platforms to use.

One major challenge that both tech companies and restaurants face is that customers have been slow to embrace restaurant technologies. But new research from the National Restaurant Association (NRA), released at the Restaurant Innovation Summit, finds that the majority of consumers have utilized tech-based dining, and an even higher percentage is interested in such options, if their favorite eateries provide them.

Younger consumers are more interested in restaurant technologies than adults, the research finds. Half of all consumers surveyed say they would utilize rewards and deals programs on a smartphone, while 70 percent of the 18 to 34 demographic say they would. Nearly half, 46 percent, of adults vs. 60 percent of 18 to 34-year-olds, reported that they would make reservations via smartphone and place orders via a touch-screen kiosk.

Loyalty programs and ordering technology options were the most popular among consumers. Reservations, entertainment and payment options followed closely, though. As far as ranking features for restaurant smartphone apps, consumers’ top picks were location/directions and viewing menus, followed by takeout ordering, reservations, loyalty programs, gift cards and social media. And with promising news for new mobile payment smartphone app, Cover – which auto-splits the bill among users – 33 percent of overall consumers and 53 percent of younger consumers said they would use a check-splitting smartphone option if it were available.

Check out some of the restaurant technologies we’ve recently covered – EMN8, Sweetgreen, and Butter. 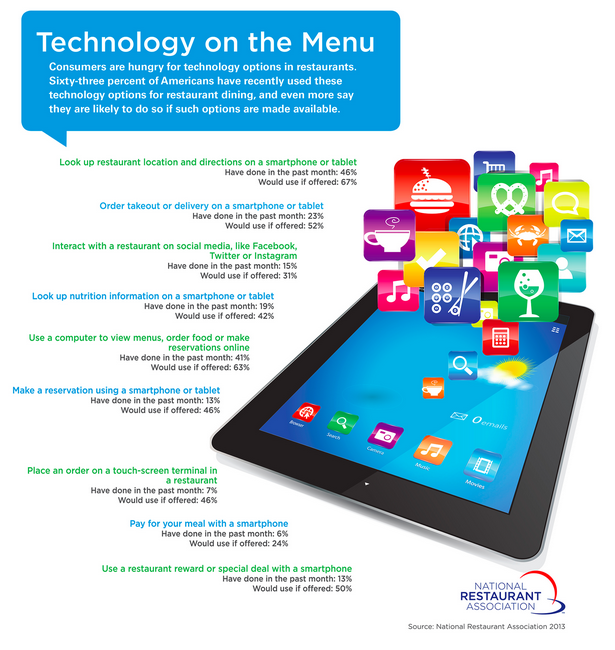