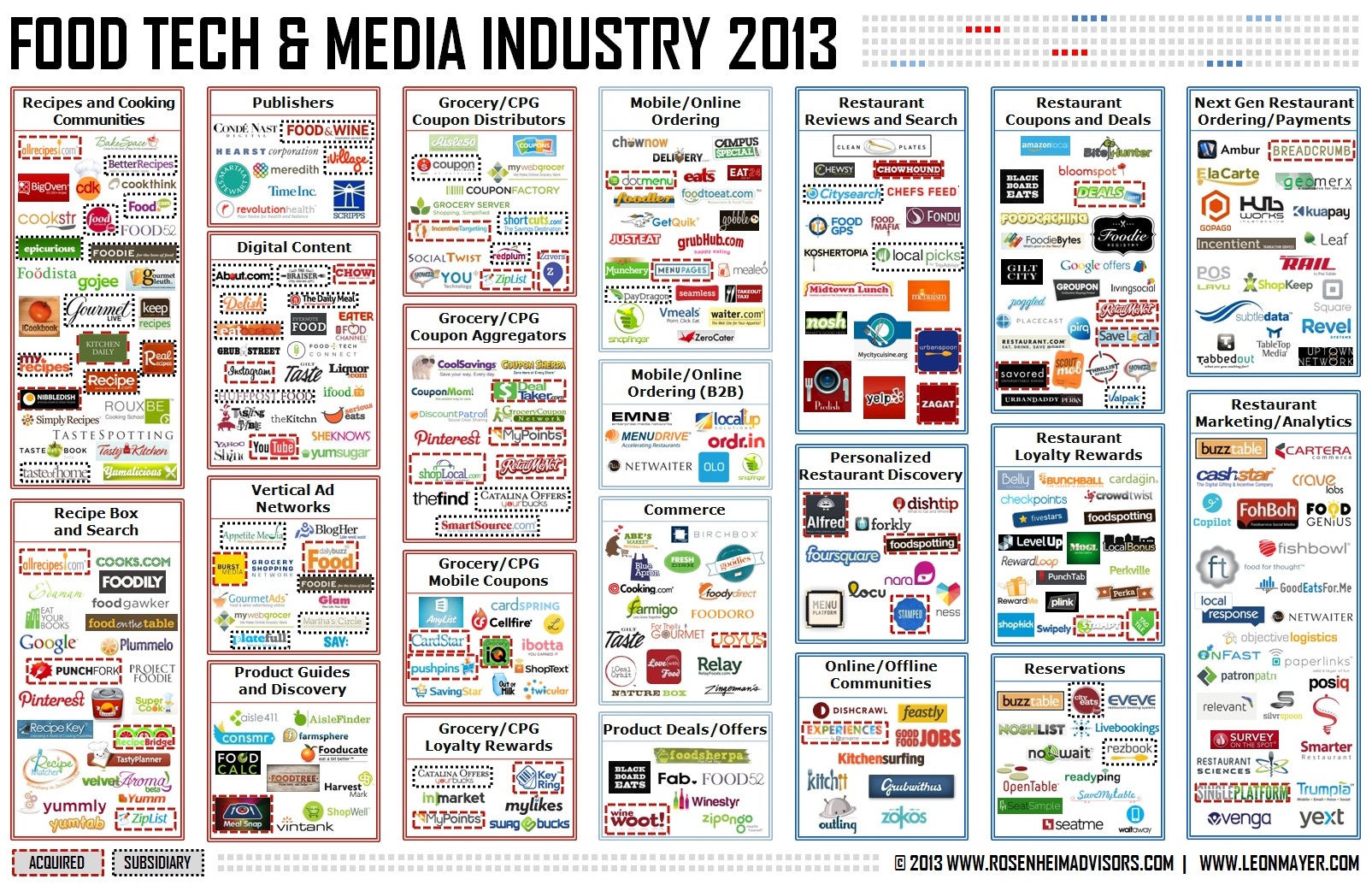 From home cooking to the restaurant experience, technology startups are enhancing the way consumers engage with food. These startups are creating significant value for consumers and notable opportunities for restaurants and brands to better understand and provide value to their customers. As the food tech sector matures, we are seeing an increasing number of these companies being funding or acquired by industry players. So, we’re kicking off 2013 with this monthly column highlighting the most interesting acquisitions, financings and partnerships within the Food Tech & Media ecosystem – digital content, social, local, mobile, e-commerce, payments, marketing and analytics – to give you insights into the latest funding and growth trends.

“The digital restaurant” was a major theme in January as technologies focused on loyalty, marketing and ordering/payments saw significant investments and acquisitions. However, substantial disruption in the restaurant industry still has not occurred as rapidly as many entrepreneurs had hoped. As investor Dave McClure impatiently points out in his treatise on the Food Tech Revolution, “everyone eats, everyone is online; what the hell we waiting for?”

It’s true that establishing a digital platform increases visibility, gives restaurants a direct method of communication with customers and allows them to utilize and analyze tremendous amount of data. But competition for consumer and operator mindshare is fierce. Given the slim margins and generally slow adoption by restaurant operators, both established participants and new entrants need to aggressively focus on partnerships and more collaborative approaches if they hope to achieve meaningful growth.

OpenTable Acquires Foodspotting. The food world was ablaze last week when the visually-focused food-sharing and recommendations app Foodspotting announced it had joined the OPEN family. While there are many different perspectives on which aspects of the acquisition are the most compelling, the somewhat modest pricetag suggests that despite its engaged userbase and recent partnerships designed to increase revenue and utility to users, Foodspotting still faced a challenging environment to scale to the next level. Take note: even with numerous partners, it is increasingly difficult to build a model that requires massive mobile user adoption, and the vast, hyperlocal world of restaurants is a tough nut to crack.

Delivery Hero Fully Acquires Hungryhouse and EatitNow.co.uk. The European online food ordering market continues to heat up with the announcement that Berlin-based Delivery Hero fully acquired UK-based Hungryhouse and also purchased EatitNow.co.uk. In February 2012, Delivery Hero acquired a ‘pivotal’ stake in Hungryhouse, but the complete acquisition allows Delivery Hero to triple its monthly business to approximately £6 million in sales across 11,000 restaurants, reports The Next Web. Interestingly, rather than an exit for the Hungryhouse team, they “re-invested 98% of the purchase price of [their] shares [back] into Delivery Hero,” and Hungryhouse co-founder Tony Charles will be taking a product innovation role, helping the company expand and develop its service well into the future. Delivery Hero has grown significantly in the last year through its aggressive acquisition of other companies, and it does not seem to be slowing down anytime soon.

Pinterest Acquires Punchfork. Deemed a great outcome for both Pinterest and Jeff Miller, the one-man team behind social recipe curation website Punchfork, and a sad outcome for enthusiastic users, the acquisition means Miller will soon shut down the popular website, API and mobile apps as Miller joins Pinterest’s engineering team to help improve the discovery product. Punchfork’s social ranking of recipes and highly visual UI helped it stand out in the crowded recipe space, however Miller’s focus on building out an API business model with robust technology  (vs. an advertising model) was likely an influencing consideration in the deal. It is notable that this is Pinterest’s first acquisition.

OLO Raises $5m. The mobile/online ordering platform for restaurants has reached profitability, and more than doubled its users last year to over 2 million. OLO plans to use the new funding to “aggressively” expand the team and scale up operations. The new strategic investment from PayPal speaks to OLO’s ambitions to ultimately expand into a full mobile commerce platform, beyond the restaurant category. CEO Noah Glass explains in an interview with TechCrunch, “Since June 2005, I thought that mobile commerce was a huge and compelling idea, but for it to really gain mainstream adoption, we had to find the right application for it … PayPal’s thinking is about being an online-plus-mobile account… is incredibly aligned.”

Abe’s Market Raises $5m. With its third round of funding, the online marketplace for natural and organic products Abe’s Market  plans to invest in marketing, hiring more talent, technology enhancements, content creation and product expansion. Although the e-commerce portal has referred to itself in simple terms as an online farmer’s market, it has been able to surpass the growth of other specialty products sites by broadening its focus to include everyday non-food items, and has augmented the shopping experience with a comprehensive product quality system that categorizes every item by every attribute (gluten free, fair trade, GMO free, Petroleum free, etc.) so customers can find exactly what they want through a targeted search.

ChowNow Raises $3m. White label SaaS mobile and Facebook ordering startup ChowNow has “hundreds of restaurants in 44 states,” and plans to use the new funding to further build both its team and its product offering. The company also plans to expand into the catering order segment – a rapidly growing space for startups – and add additional CRM and analytics features for restaurants.

Virgin America partners with restaurant loyalty platform MOGL for Elevate® Frequent Flyer Program. Given the numerous challenges that many restaurant-focused tech companies face as they attempt to scale, this is a tremendous partnership for the startup MOGL, which increases both brand visibility and utility to users, and provides added incentive for restaurants to join the network. Elevate members who sign up for MOGL will be able to earn 10% cash back from every bill at MOGL partner restaurants, and then exchange that cash to Elevate points each month. Adding to the feel-good component, MOGL also donates a meal through Feeding America every time MOGL members spend more than $20 on a check.

Epson bolsters its OmniLink POS solutions by partnering with mobile loyalty rewards platform RewardLoop and operational and consumer analytics provider Livelenz. By partnering directly with the POS provider, both RewardLoop and Livelenz are able to skip to the front of the line and have direct interaction with all OmniLink restaurant operators. RewardLoop’s cloud hosted, self service rewards platform resides on the printer – not the POS system – and prints QR codes on the receipts for customers to scan. Although the current solution is bolstered by printer/POS partnerships, the company views NFC as a more compelling solution and is “poised to take advantage of this technology as it becomes more prevalent in consumer markets.”

Restaurant menu dashboard and local business data provider Locu partners with TripAdvisor and CitySearch. Following a partnership with OpenTable in November, Locu scored a big distribution win by powering menus, deals, and more to the mobile and web users of TripAdvisor, which has been recently focusing more on its restaurant content, and CitySearch – although it doesn’t appear that sister property UrbanSpoon is part of the partnership.

PayPal takes another step outside of the ecommerce world to partner with NCR Corp’s POS technology for restaurants and gas stations. Ahead of PayPal’s announcement that it was a strategic investor in OLO’s latest round of funding, it made a splash by announcing it will be further expanding into the physical restaurant category through a deep implementation into NCR’s Mobile Pay app and NCR Online Ordering, and perhaps more interestingly, vise versa, as PayPal will integrate NCR’s Mobile Pay merchants into its own branded app. VentureSource observes that this partnership “could end up being of the most significant developments for PayPal in its quest to become the One True Payment Service” (NCR’s customer base includes 38% of the top 100 U.S. restaurant chains). While this may be true, neither are monogamous, and NCR has stated that it is open to similar deals with other mobile payments providers down the line.

Gourmet meal delivery startup Pop-Up Pantry shuts down operations. While accomplishing a lot of momentum in just six months – including 1,300 monthly paying customers and securing an innovative partnership with TV show “MasterChef” – the economies of scale were not achieved quickly enough, and the cost of shipping the meals was a hurdle they couldn’t surpass.

Ethnic cooking and monthly commerce startup Culture Kitchen closes shop. As part of the second class of 500 Startups, Culture Kitchen started as an online site that featured classes on how to cook ethnic dishes and evolved into a monthly commerce venture that sold DIY Ethnic Cooking Kits. Despite an enthusiastic community, the team decided it was time to move on, and in their farewell post  the co-founders candidly discussed the difficulties that confronted them, including “challenges with sales, bumps in the road with funding and the sometimes dwindling team energy from working very long hours.”