Last September, we reported that Food Genius had raised $1.2 million to build Food Genius Reports, a data-driven restaurant menu trends dashboard for the food industry. Now, four months later, the team has officially launched the insights dashboard, and its impressive.

Tracking more than 100,000 unique menus with 22 millions items from independent and chain restaurants across the country, companies can use the dashboard to test ideas for products, ingredient combinations, geographic variations, preparations and descriptive sensory terms in near real-time; the tool can be used for both product development and marketing strategy. “Our goal is to turn menu research into something that happens daily or hourly. We want to make easier for companies to quickly sort signal from noise and track the menu concepts that matter to their bottom line,” said Co-founder Justin Massa in a phone interview. 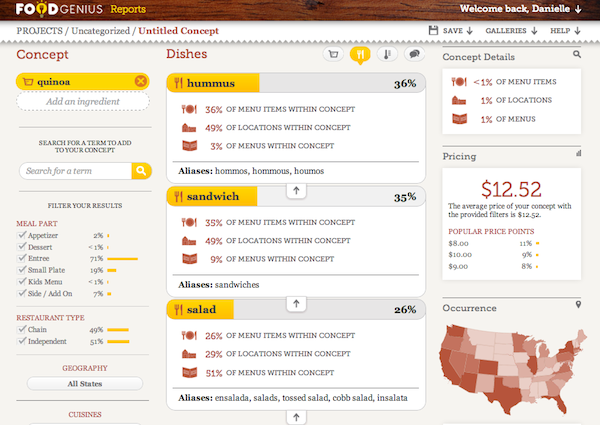 Say you’re a big CPG company looking to capitalize on the unique grain trend by developing a new chicken and grain-based frozen entree. You have a number of rice-based dishes, but after Consumer Report’s report on high levels of arsenic found in rice came out you’re looking to diversify your grain offerings. You’ve been hearing a lot about quinoa recently, but will it have mass market appeal?

Using Food Genius Reports you can tap into GrubHub and CHD Expert data to see that quinoa is currently only mentioned on 1 percent of both chain and restaurant menus, it most commonly appears in salad, and there is no statistically significant data for the pairing of it with chicken, however, beans and fish are frequently paired proteins. Quinoa most commonly appears in the West and Pacific Northwest areas of the country, with an average price of $12.52 per dish.

You can also use the dashboard to determine the most commonly used descriptive and sensory words, in this case: wrap, wrapped, organic and grilled. Yes, you should forget about that deep fried quinoa dish undergoing R&D. Finally, Food Genius Reports also allows you to search for popular quinoa recipes on the web. This functionality is currently powered by Punchfork’s API, which will likely be changing in the near future, given that the company was recently acquired by Pinterest  (click for lessons learned on Recipe API business model) and will be shuttering its API.

For now, the company is not offering analysis of historical data, but data is updated quarterly, and users can compare reports created over time to track the trajectory of a trend. In the future, I would imagine companies will also want to use social data, from, say, Food Genius’ data partner Grubhub, to gain a deeper understanding of consumer insights, demographics and sentiment.

The Challenges of Selling to Big Companies

While the offering is pricey, 5 companies – manufacturers, a consultant and a grocery brand – committed to buying the product even before it was ready, reports Massa. Until now, it’s been a 6 week sales cycle on average, but at $2,000/month for an individual plan, $3,500 /month for the premium plan and $10,000/month for the enterprise plan, the longer sales cycle seems worth it. Large food manufacturers that are doing around $100 million in sales have proved to be surprisingly nimble and easy for Food Genius to work with, says Massa, as many lack formal procurement processes and can therefore make decisions relatively quickly. Working with gigantic customers, however, is another story. Food Genius finds that you may get a yes almost immediately, but the procurement process can often take up to 6 months or more.

Food Genius’ other major challenge is in selling a new dramatically new way of conducting product research. Reports requires a company to do a lot more work than they’ve done in the past (i.e. hiring a market research firm do the research and produce a report). But Food Genius is not worried. “This tool is made for the folks that do want to do that work- they are ones who truly want to differentiate themselves,” says Massa.

What do you think? Are you optimistic about Food Genius’ ability to translate big restaurant menu data into actionable insights for the food industry? Why or why not?