Food Genius entered the crowded market of dish recommendation apps last year, using big data to revolutionize the way people discover restaurants and dishes. At the time, the startup’s focus was on getting (scraping) as much menu-level data as possible, which they parsed by ingredients, preparation methods, spices and other aspects of a dish, and combining it with a user’s personal preferences and reviews shared on other websites. The company was still exploring business models, but knew that collecting and combining data about what, when and where their users were eating could offer invaluable insights to anyone from consumer packaged goods companies (CPG) to mom-and-pop restaurants, CEO Justin Massa told me in an interview last year. And now, they’re releasing their first related product for businesses.

“The food and restaurant industry is ripe for data disruption, and Food Genius offers astounding insights in this market where the consumers’ voice has been opaque,” comments Guy Turner, managing director at Hyde Park Venture Partners, in a press release.

Currently tracking more than 360,000 restaurant locations, 110,000 unique menus and 16.3 million restaurant menu items, the company will be launching Food Genius Reports in early winter 2013. The restaurant trends dashboard will be designed to allow users to get key insights around menu-level industry trends like what dishes to make, how to market them and how to price them. 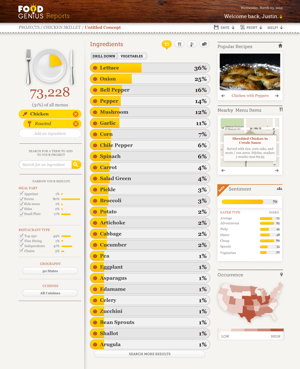 “Let’s say you’re [a CPG company] working on a frozen pasta and chicken skillet meal – but that’s all you know. The included veggies, type of pasta, marketing language around prep methods, price point, etc are all up for discussion. Where do you go next?

With Food Genius Reports, you can quickly find inspiration and key contextual data. In just a few clicks, you’ll learn that “mushrooms” are the most commonly paired vegetable, [at restaurants], with chicken and pasta. For the pairing of chicken and mushrooms, the most commonly used pasta is “penne”. And for dishes with penne, mushrooms, and chicken, the chicken is most frequently grilled.”

Like most startups, it took some time for the company to settle into its business model. During their time in the Chicago-based accelerator Excelerate Labs and later as a Startup-in-Residence at IDEO’s Chicago studio, the company explored various data-driven models, closely validating their assumptions by talking to potential customers. “As we investigated pivoting to a focus on a B2B data service, we quickly realized that there is an incredibly disparity between the data about CPG (about half of the food industry, by consumer spend) and restaurants,” says Massa.

Food Genius recognized that a significant opportunity exists to give the restaurant industry what the CPG industry already has- “actionable insights,” as Massa puts it. These insights are pricey, though. A monthly license for the individual plan, which includes full menu data but not geographic filters, maps or pricing, is $2,000 per month per user. The first 20 individual plan customers, however, will receive an “early adopter discount” of $899 per month. The enterprise plan, which includes all features – maps, geo filters, and pricing data – as well as custom training and live support, is $10,000 per month per user.

Current options for such insights include incumbents like Datassential, Mintel and Technomic. Datassential has a database of over 5,500 menus and 600,000 dishes; Mintel’s database has 2,600 menus and 1.5 million menus; and Technomic has “thousands” of US and International menus- its U.S. based subscription consists of the Top 500 Chains, 150 emerging chain and 100 independents.

Food Genius plans to set itself apart by using big data mining technologies and machine processing to spot trends faster than any of these companies currently can. Only time will tell how successful its new real-time, big data product will be in capturing the sales and marketing dollars of CPG companies and restaurants from its competitors.