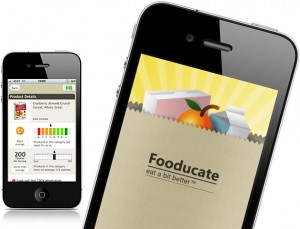 Amidst a growing debate over the labeling of food made with ingredients derived from genetically modified organisms (GMO), Fooducate released a new feature this week that helps grocery shoppers identify which products are made with GMO ingredients.

The overall debate is being fueled by Proposition 37, a ballot initiative in California, that would make producers clearly label anything that contains GMO ingredients. Companies like Monsanto, which has spent over $7 million alone to defeat the initiative, are opposed. Companies like Nature’s Path Foods, which has spent a little over $600,000 to support it, are urging voters to pass the law. Polls show that most Californians are indeed in favor of it, but support is slipping in the wake of a negative ad blitz.

While that debate plays out in California and across the nation, Fooducate’s latest feature is a stopgap for consumers that want to know more about GMO ingredients in the food they’re buying. For background, Fooducate is a mobile grocery application that helps shoppers navigate food labels. A user scans a barcode and the app grades the item by how healthy it is and suggests alternatives that are healthier. The apps are free and on Google Play and iTunes have an average rating of 4.4 and 4.5 out of 5, respectively.

With Fooducate’s new GMO feature, users can choose to be notified about GMO ingredients and when they scan a barcode, see how likely it is to contain them. To make this work, Fooducate compiled a proprietary database of ingredients and their likelihood of containing GMO. For example, if it contains corn or soy there is a high probability it would contain GMO ingredients, whereas beets would be a medium probability.

“We built our own [database], but we did poke around public resources. We also consulted with food scientists and other experts,” says Hemi Weingarten, the Founder and CEO of Fooducate.

Weingarten says GMO information has been a repeated request from users since they launched the app two years ago and they started building out the feature two months ago. “The heavy lifting was in integrating information from multiple sources: manufacturers, non-GMO project and our internal database,” says Weingarten.

It’s not a perfect solution, in that users only get back the level of probability that something contains GMO ingredients and might scare some off products that are otherwise fine. But, it’s an option Fooducate users can toggle on and off.

If under some scenario Proposition 37 passes in California and snowballs such that the Food and Drug Administration mandates GMO labeling nationwide, it would negate the need for Fooducate’s GMO feature.

“We certainly won’t shed any tears if our GMO feature becomes superfluous…” says Weingarten. “We can only hope.”